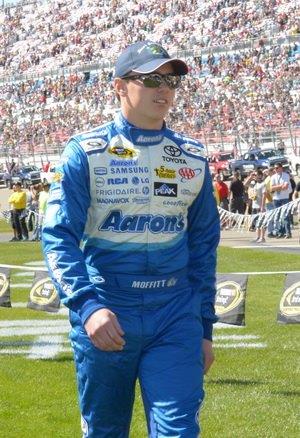 Brian Vickers did not win the Kobalt 400 this past Sunday. He did not even place inside the top ten. The real victory which Vickers experienced was of more significance than any win on the NASCAR Sprint Cup circuit. Vickers did not accomplish anything historic.

Vickers celebrated a victory all of his own. He celebrated a feat which tells a tale of perserverance and determination. This is a celebration which, not only NASCAR, but the entire sporting world should embrace.

"It's incredible. It feels so good to be back in a race car," Vickers said following the Kobalt 400. "I'm just so happy and so thankful."

Vickers' story is one of many setbacks and complications. Vickers joined Red Bull Racing in 2007 after a brief stint with Sprint Cup powerhouse Hendrick Motorsports. Three years into Vickers' run with Red Bull Racing, he had one win and a terrible diagnosis.

Vickers, who had three top tens in the first 11 races of the 2010 season, was diagnosed with blood clots in his legs and around his lungs. This condition forced the Thomasville, NC native to miss the remainder of the season. Vickers returned to race the entire 2011 season only to see Red Bull Racing close its' door following the campaign.

This left him with no full time ride. He would spend the next two seasons in part time roles and various substitute roles for both Joe Gibbs Racing and Michael Waltrip Racing. Vickers seized these opportunities by piling up 11 top ten finishes and a win at New Hampshire in 2013.

While Vickers racked up these accomplishments in a part time role, team owner Michael Waltrip took notice and named him the full time driver of the Aaron's Dream Machine for the 2014 and 2015 seasons.

After running an entire season for Michael Waltrip Racing in 2014, Vickers once again received haunting news about his health. On December 15th, 2014 it was announced Vickers would undergo surgery to repair a hole in his heart.

This condition would force the Thomasville, NC native to miss the first two races of the 2015 NASCAR Sprint Cup season.

"I wasn't sure if I would ever come back," Vickers admitted following Sunday's race at Las Vegas Motor Speedway.

Only time will tell if Vickers will stay healthy enough to continue to run full time in NASCAR's premier division. It is refreshing in the modern sports world to witness a story that demonstrates all the right things sports are supposed to stand for.

The will to succeed.

The will to win.

The will to never give up.

While Vickers did not celebrate in victory lane. This is a personal victory the sports world should be anything but quiet about.