CHASE ELLIOTT REBOUNDS AT THE ROVAL

Last week, Martin Truex Jr made a statement by getting spun and then going on to win the race. Chase Elliott decided to one-up that buy stuffing his car in the wall and coming back to win the Bank of America Roval 400 at Charlotte Motor Speedway.

A week of drama started with William Byron on the pole as Alex Bowman slotted into the other front-row position; the two drivers were in danger of not advancing to the next playoff round and they needed to good starting positions. The second-place position wouldn’t be Bowman’s for long though after a wreck in the final minute of final practice and would have to start in the back in a backup car along with fellow playoff drivers, Denny Hamlin and Truex. No issue into turn one as Byron got away and the field made it through as well; Bowman, Truex and Bubba Wallace then had an issue on the backstretch chicane. Truex did a stop and go for missing the turn while Bowman and Wallace were issued a pass-through penalty for not stopping. Truex then had to stop again after missing the chicane again. The caution then came out from a spin from Ryan Preece who was able to keep moving but erased a seven-second lead for Byron. Byron stayed out while Larson was second with three to go on the restart. Larson was able to get to the front as multiple cars spun including Kurt Busch, Chris Buescher, Jimmie Johnson, Erik Jones, Hamlin, and Bowman. No major damage for any of the cars but Jones who had to go to the garage; officially ending his Playoffs; the caution would end the stage with Larson winning it.

Joey Logano and Brad Keselowski stayed out to get the lead while Kyle Larson was held a lap for pitting out of his pit box. Logano got into one with no problems while Harvick slipped into second. After some time, a fast-charging Elliott flew by Harvick and Logano to get the lead. Logano had to make two pitstops after hitting the wall and picking up some damage after his first stop while Johnson had to pit for a flat. Caution out for Bowman spinning Wallace; continuing the recent issues between the two. Larson got the free pass as Michael McDowell and Clint Bowyer stayed out to get to the front row. Bowyer went wide and Keselowski was able to get to the lead and then had to fight off Elliott to hold it. Elliott got by and then started to lose the field. Right as Hamlin spun by himself, Elliott would win stage two.

Elliott got a strong start but another caution came out as Daniel Hemric spun; Ryan Blaney had to pit to fix a possible broken strut which put him in a bad spot for the playoffs. The fight began for Elliott on the restart as he locked up going into turn one and stuffed his car into the wall; the damage wasn’t bad, but he lost the lead and all his momentum. Harvick got to the lead on the restart as Keselowski spun his tires while Kyle Busch had to spin with a tire issue. Green flag stops began and there were no issues as Harvick was able to cycle back to the lead. Matt Tifft spun and brought no caution but only a little while later Ricky Stenhouse Jr spun as well with traffic bearing down on him and brought out the caution. Caution on the restart as Ryan Newman, fighting for his playoff hopes, gets tangled up with Paul Menard and Hamlin; no issues aside from some minor damage. And another caution on this restart as Daniel Suarez slides out through the grass and stalls. Almirola pitted under the caution and was put in a below the cutoff line with a lot of cars in front of him to make up the deficit. Harvick got away again on the restart and again there was a caution as Buescher and Kurt Busch got tangled up. Under the caution, Garrett Smithley had an axle come out and lay down grease throughout the track; red flag. During the red flag, Kyle Busch, who was already three laps down and a heavily broken car, went to park his car in the garage; him and his team determined that it wasn’t worth anymore possible issues with nothing to gain from it. Harvick and Truex lean on each other on the restart and it lets the still surprisingly fast Elliott into second. Elliott takes the lead after giving Harvick a few bumps as Bowman follows him to get into second and put him only one point behind the cutoff position which is held by Newman in fifteenth. Bowman’s tenacity to not give up worked as Newman missed the chicane and lost spots; giving Bowman the points he needed. As the white flag waved for Elliott, Suarez spun and sustained heavy damage, but it didn’t affect the end as Elliott went on to pick up the checkered and a guaranteed spot into the next round of the playoffs. Bowman was just able to race his way in, much to the dismay of Wallace who would throw his water in Bowman’s face on pit road, while Kurt Busch, Erik Jones, Ryan Newman, and Aric Almirola will have to fight for the win at Dover without the playoff implications. 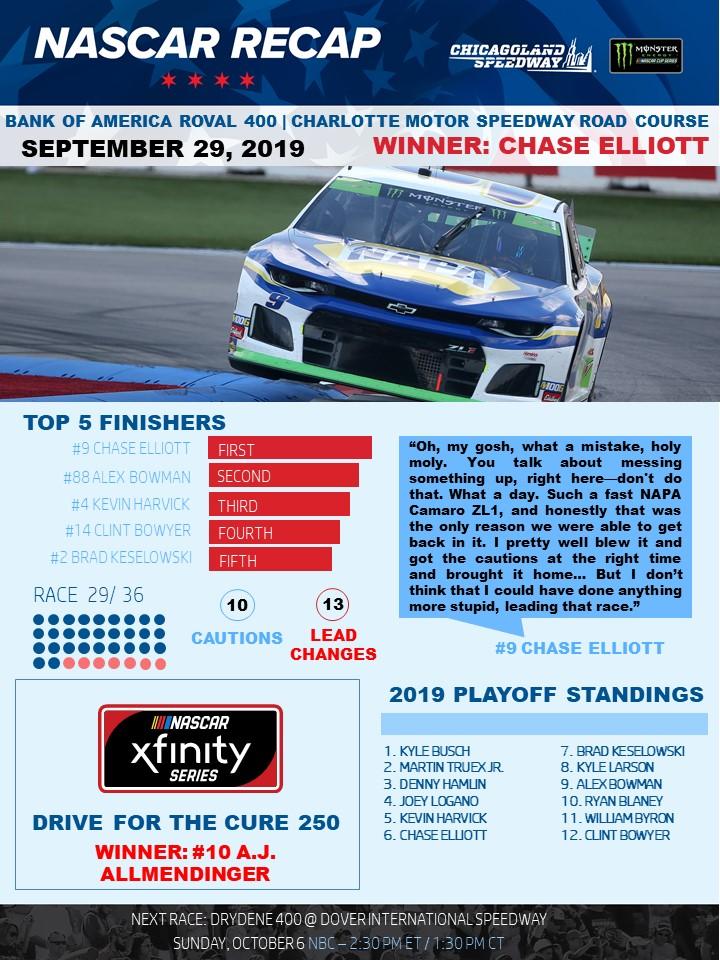