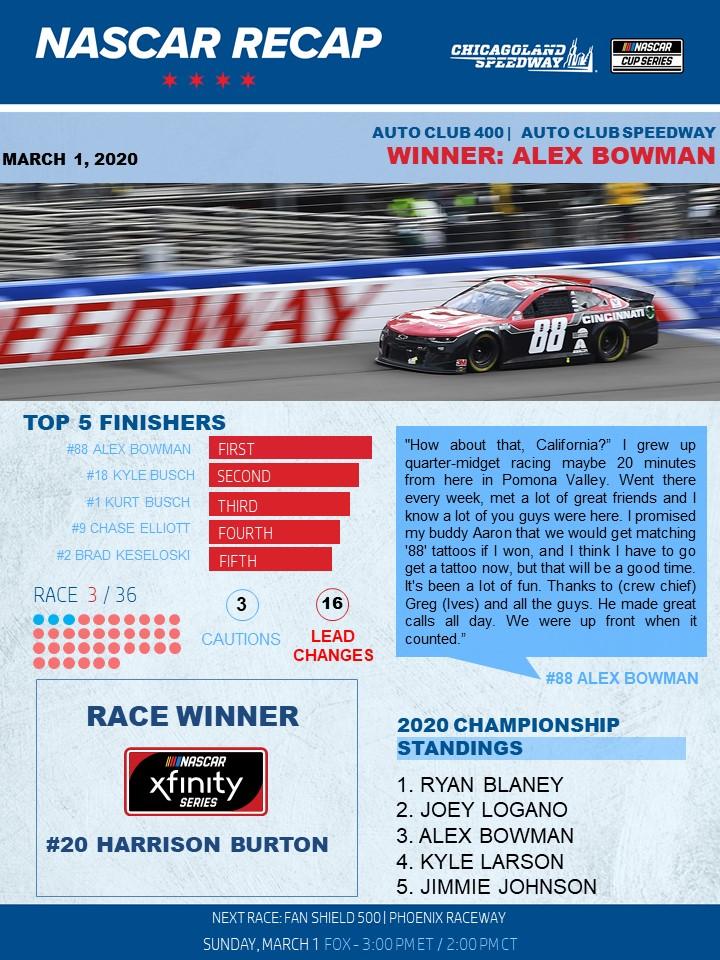 Since the moment the NASCAR Cup Series hit the track during practice for the Auto Club 400 at Auto Club Speedway, Alex Bowman was fast and one of the clear favorites to win. Bowman backed up those beliefs with a dominant performance on his way to his first win of the season on sunday.

A surprise started the weekend out with Clint Bowyer winning the pole, only the fourth of his career which even surprised Bowyer himself. Jimmie Johnson, the hometrack favorite driving his last race in Fontana, got a close run to Bowyer and slotted himself into starting second. Clint pulled away on the start as the whole field behind him started to spread out. Bowman was on the move and into second only five laps in until Kurt Busch went three-wide with Bowman and Johnson. The three fought hard until Johnson broke away and was able to get right on Bowyer’s bumper. Johnson wasn't able to make the pass which gave Bowman the chance to go by both of them. Ryan Blaney steadily drove into second and Bowman checked out as the field started to settle. Martin Truex Jr, who started at the rear after failing pre-qualifying inspection three times, fought all the way to eleventh and then pitted to start green-flag stops for everyone. Much like at Vegas, Ricky Stenhouse Jr. stayed out the longest to try and get lucky with a caution; it didn't work and Bowman took the lead again as Stenhouse pitted. Kyle Larson gets heavy damage from being pushed into the wall by Denny Hamlin when he got a fast run, Larson was able to pit and continue on but with no caution he fell a lap down. After the near caution, the field settled down and Bowman was able to cruise to his ever stage win.

Kurt Busch was first off pit-road but only because he had missed his stall so Johnson took the lead. On the green, Johnson was able to keep the lead but lost it as Blaney got a push to the lead. Bowman went three-wide to take the lead but Blaney took it right back with an aggressive move. Meanwhile, Christopher Bell had to go to the garage as he had lost a cylinder; the day was over for the ROTY contender. Green flag pits began after Blaney began to pull away; Blaney kept the lead as the first caution came out for Bowyer losing a tire after shearing a valve stem. On the green, Blaney kept the lead as everyone behind him went four-wide. As Blaney pulled away, he began to gather debris on his grill but was able to to draft up to the rear of Reed Sorenson and blow it away. In doing so, Blaney was able to keep the lead and went on to win stage two by three seconds.

Johnson was first off pit-road as Blaney fell to third for the start of the final stage. Bowman got pushed to the lead when the green waved, but lost it soon after Truex was able to be the victor in a four-wide pass for first. Hamlin pulled into the lead battle but fell back as Bowman was able to take advantage of the hard racing to take the lead back. Hamlin began to have more issues as he scraped the wall and began to fall a little. Green flag stop began to swing around again as Bowman got out to a three second lead. A possible win was taken from Truex during the stops as his tire changers had an issue with their equipment, resulting in a very slow stop. Bowman had no issues and continued to pull even further away. Blaney began to slowly make some gains but had to slow down and then pit with two to go for his tire beginning to shred. With no one to challenge him, Bowman was easily able to claim his second career Cup Series win and a ticket to the Playoffs.