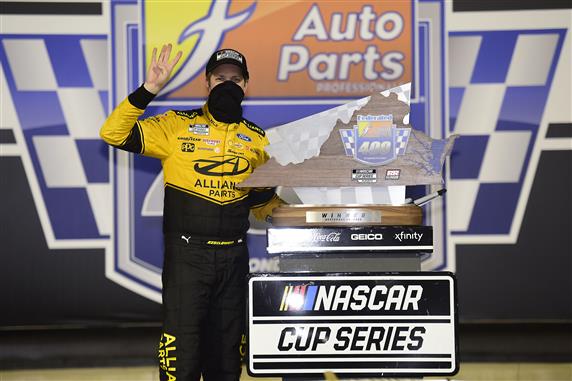 “Just could never really find it. Really was pretty surprised that we ran as good as we did with the way that the car felt,” said Truex who was trying for three straight in his No. 19 Toyota Camry. “It really wasn’t doing anything that I wanted it to do or that we’ve done here in the past when we’ve been good. Just a battle all night, fought hard and the guys did a great job with adjustments, pit stops and all that to just execute and keep us up front. Good, solid night.”

Keselowski, who started ninth, maneuvered his way through the pack and finished fourth in the first stage behind winner Denny Hamlin, a native of Chesterfield, Va. and driver of the No. 11 for Joe Gibbs Racing. He took the lead for the first time on lap 121 before winning Stage 2 and staying in the top five the rest of the way.

His fourth win and 20th top-10 effort the season was also his 12th top-10 result at Richmond in 23 starts. It marked his 34th career victory, taking him out of a tie with NASCAR Hall of Famer Fireball Roberts and place him 24th on the NASCAR all-time win list. The triumph was also the ninth for Team Penske at Richmond.

Rounding out the top five were Keselowski’s Team Penske teammate Joey Logano, Austin Dillon, who led the second-most laps with 55 on three occasions, and Chase Elliott. The rest of the top-10 were all Cup Series Playoff drivers: Kyle Busch, Kevin Harvick, Aric Almirola, Alex Bowman and Clint Bowyer. Tyler Reddick was the highest finishing rookie in 11th followed by Hamlin in 12th. Both were a lap down.

For Dillon, it marked his second consecutive top-5 effort after finishing second at Darlington last weekend.

“To come from the back [after the speeding penalty] and finish second in Stage 2 was just so awesome," said Dillon, driver of the No. 3 Richard Childress Racing Chevrolet. “This race team is on fire right now and showing up when it matters."

Keselowski and Harvick, who won last week at Darlington Raceway, are guaranteed to make the Round of 12 of the Cup Series Playoffs, along with Hamlin, who clinched on points Saturday night. Heading into the final race in the Round of 16 at Bristol next weekend, there are still a lot of questions as to what 12 of 16 drivers will advance.

While his second Richmond victory was convincing, it was not as easy as it looked from Keselowski’s perspective.

“Very patient. I tell you, it’s a chess game and I got blinders on,” added Keselowski.  “I don’t know what everybody is doing and who is where and who is on what strategy, but (crew chief) Jeremy Bullins, the whole 2 team, excellent performance. I can’t thank them enough. Thank you, team. Thank you everybody at Team Penske that gave me such a great car.  It’s a really special day.”