One philosophy that many racing promoters bank on -- and often foolishly, at that -- is that all it takes to make a buck is “open the gates and the money will flow in” mindset.

But that’s exactly what’s going to happen May 20-25, 2020, at Memphis International Raceway, when the co-promoters of the Great American Guaranteed Million will already have their money in hand. A sizable chunk of it will be going out the gate, too, the bulk of which is a $1 million payout to the winner of the Friday-Saturday portion of the action.

“The state of bracket racing is, I think, at an all-time high right now,” said Louisiana drag racer Britt Cummings, who co-promotes big-money bracket shows with Gaylon Rolison. “The economy is great, and there are two 500 granders this year. My thinking was, ‘Someone’s going to do a million, so why not us?’ “

Cummings describes himself as a ‘gambler’ when it comes to big ideas. Rolison, a lifelong resident of Gulfport, Miss., who also promotes a King of the Coast series at his hometown track, provides a measure of balance, in a sense.

“I wouldn’t say I’m not a risk-taker, I’d say I’m just more methodical, trying to weigh it out and deciding what are the chances of it being successful or not,” Rolison said. “A million dollars is a lot of money. I said, ‘I’m definitely interested. Let’s put it on paper and see how we’re going to execute it.’ What he showed me, with my years of experience, it made perfect sense.”

Racers will pay a $3,000 entry fee to participate in the million-to-win event. The field will be capped at 450 entries ($1.35 million), and 48 of those spots in the field will be reserved for bottom-bulb competitors. Those four dozen drivers will compete among themselves until there’s a winner, and that racer will receive $5,000 and continue in competition against the remaining cars in the top-bulb ranks.

That two-day show is one of four during the full event. Separate races paying $40,000 to win will be held Thursday, Sunday and Monday, and the entry fee for each of those is $750.

Rolison said the Great American Guaranteed Million offers something new for bracket racers in its format. 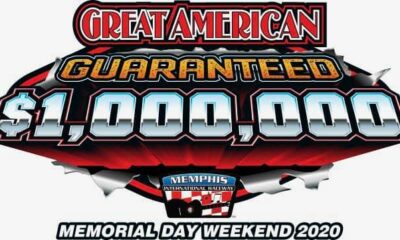 Why limit the number of entries?

“If you don’t have pre-entry and ‘cap’ the field,” Cummings said, “you could have seven or eight hundred cars show up at the gate and your whole timeline is out the window.

“Our goal is to not run past 9 o’clock any night. That way, the racer can get finished, get showered, cook out with his family and friends, socialize, get a good night’s sleep, come back the next day and do it all over again. At 50 years old now, there’s no way I could race ‘til 4 o’clock in the morning. Even the young racers, there aren’t many of them that like racing that late at night. We’re trying to set our race up for the fun factor and the biggest-paying race in history.”

Rolison said that strong racer attendance for big-money bracket races in Memphis is also a factor in their race continuing at MIR.

“We’ve always said that Memphis is the mecca of big-money bracket racing,” Rolison said. “When the George Howard million-dollar races were there, they produced very large car counts. Memphis is very centralized. I feel like Britt and I have reputations that we try to do things the right way. We’re really excited about it.”

It’s already a hit with sponsors, Cummings said, noting that some got involved behind the scenes a year ago when the race was in its earliest planning stages. He spent a considerable amount of time last weekend making pitches to potential sponsors while also racing in Super Comp at Sonoma, Calif.

“Man, it has been non-stop. Every day, all day, I’ve been on the phone talking with either a sponsor or a racer about it; racers wanting more information about it,” Cummings said. “In Sonoma, I had sponsors calling me that I had sent packages to and calls from sponsors that haven’t even gotten their packages yet.”

Memphis has hosted the ‘Great American’ brand the past eight seasons, and will continue to do so through at least 2020 for multiple reasons.

“We know the ins and outs of the track, and we’re very comfortable there running things,” Cummings said. “We know how to run a race at Memphis … or we know what not to do there, if that makes any sense. We think we’re getting better and better every time.”

Racers don’t have to ante up their $3,000 entry fee all at once, though they can. Pre-entry opens Oct. 11, and payment plans are available for racers who want to stretch out their payments.