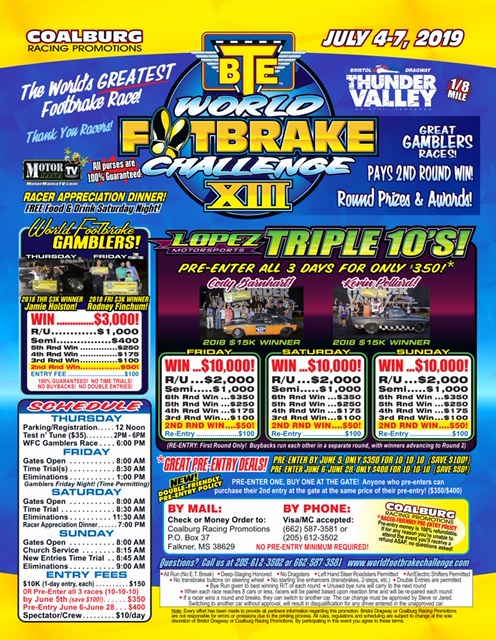 Celebrating our nation’s Independence Day will take on a slightly different aspect for a what is certain to be a record number of footbrake racers who will compete this week in the 13th annual BTE World Footbrake Challenge. The venue will be Bristol Dragway’s historic Thunder Valley where the thunder to be heard will be the winning racers in the four-day event.

Opening day Thursday will be the first of two World Footbrake Gambler’s Races, also to be held on Friday. Friday will then officially kick off the weekend with the first of three $10,000-to-win races, with the presenting sponsor Lopez Motorsports. The entire purse for the event is guaranteed and a second-round win earns you some money.

While pre-entry for the event began months ago, it offered those a discounted entry fee, but the event is far from closed and entries will still be accepted at the gate. However, a record amount of pre-entries have already been taken ensuring this year’s race to be the largest in the history of the event. In addition to the race purse, a number of special prizes and awards are set to be handed out.

We’re pretty excited this year in part to the record number of pre-entries,” said co-promoter Jared Pennington. “And we can’t wait to get started on Thursday.”

The gates at Bristol Dragway will open at noon with opening day time trials beginning at 2PM. Eliminations for the first WFC Gamblers Race will take part at 6PM.

Saturday night will be a Racer Appreciation Dinner that is open to all on the property; racer, crew or not. MotorMania TV will also be on hand to stream the entire event in the internet.