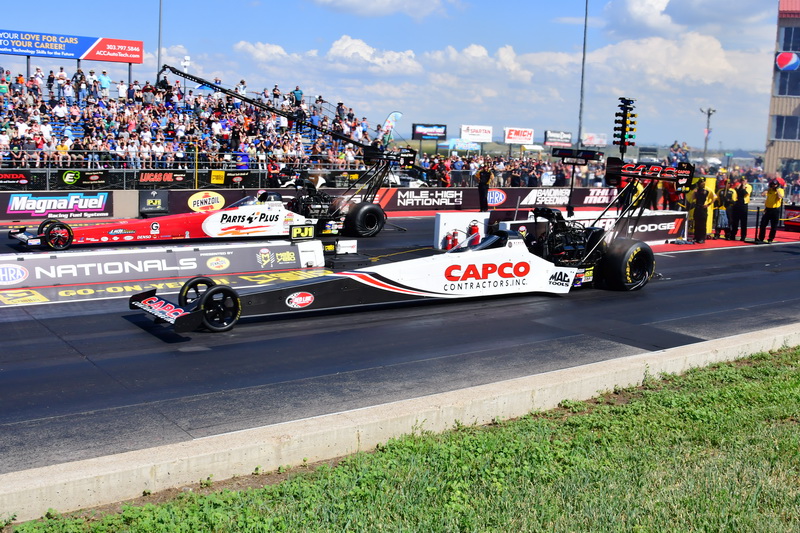 There are just some names that are synonymous with Top Fuel drag racing. 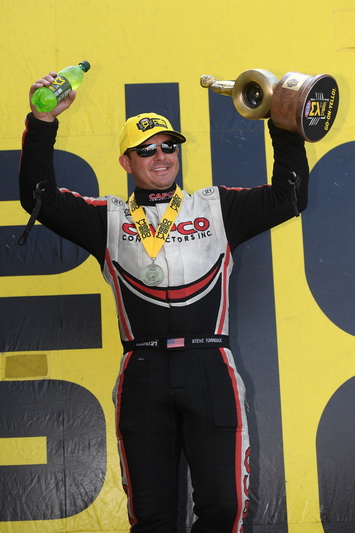 Already in rarified air with his successes over the past two-and-a-half seasons, the savvy racer from Texas continued his march up the list of all-time greats on Sunday when Torrence tied NHRA-great Don Garlits with his 35th career victory at the 40th annual Dodge Mile-High NHRA Nationals presented by Pennzoil.

Torrence entered into a tie for seventh on the all-time class win list with a win over Clay Millican in the final Sunday at Bandimere Speedway as Torrence won in a pedalfest to collect his eighth win in the last nine races.

“It is very humbling to have your name mentioned in the same sentence as (Garlits). He is a legend of the sport and he pioneered so much. He is one of the greatest and when you say we are tied with him, it is humbling,” Torrence said. “I don’t believe I have fully realized what it is we have been able to accomplish over the last couple of years and I believe when you are in a moment like this, you need to relish it and enjoy it because they don’t last forever.”

Dominating the class like few before him, Torrence added another first to his list of accomplishments on Sunday with his first win on the track outside of Denver in a close matchup against Millican. Both drivers hazed the tires and started dropping cylinders during the run, but it was Torrence who carried the momentum in crossing the line first to earn the win.

“Clay and I have a pretty long history. I’ve known him since I raced alcohol and to go up against a fellow southern individual in the final was pretty cool,” Torrence said. “He is always a tough competitor. He is a seasoned driver so you have to be on your game up there and to be honest I didn’t realize that the race was as close as it was.

“I could see him move out and I could see the front tire and the wing of his car, and then I saw him fall away so I knew that he smoked the tires. I breathed a sigh of relief and then the next thing I knew my car is smoking the tires too. So I am trying to get off of it and get it back going and at that point in the run you still have some momentum. I don’t think I did the best job, but it was good enough in that circumstance.”

Torrence added wins over Brittany Force and Richie Crampton to earn his 27th win in the last 57 races - an astonishing win percentage of nearly 50 percent - after starting from the No. 1 position on the ladder.

Both Force and Crampton were forced to click it off early after running into problems during their runs as Torrence marched to his ninth-straight final round with runs of 3.821 and 3.970, while adding a 3.787 in his first-round bye.

“We’ve been able to maintain this level of consistency, not so much because of the driver, but because of the team we have assembled. We’ve been able to have these guys together for six years continuously and when you have that kind of bond they go out and they know what each other is thinking without saying a word,” Torrence said. “They make all the right calls and the right decisions and give the crew chiefs the best car time and time again.

“Richard Hogan and Bobby Lagana have a really good handle on this thing right now and it gives you confidence when you have a car that is this consistent and goes down the track time and time again. And, sometimes, you benefit a little bit because of that.

Millican had wins over Jordan Vandergriff, Leah Pritchett and Doug Kalitta to reach his third final of the season - all runner-up finishes.

With the victory, Torrence moves one step closer to another potential milestone as he is now the only Top Fuel driver capable of winning the famed Western Swing. While Torrence has seemingly done it all, from winning a championship to sweeping the Countdown to the Championship, a sweep of the trio of races out west would be another feather in the cap of a driver quickly climbing the list of all-time greats as he now sits just 10 wins shy of a spot in the top five.

“We are the only ones that can sweep the swing at this point and that would be a huge accomplishment. It would be something that I would like to be able to do and we are heading in the right direction right now,” Torrence said. “I think about some of the things that we have been able to do over the past couple of seasons and it is still unbelievable to me. I don’t want to get too caught up in the right now, we just need to keep doing what we are doing.

“Eventually there will be a day that I’m not going to race anymore and we will look back and see what we did then. You don’t want to get hung up in everything that is going on and how great you are because there is always someone like Austin Prock or Jordan Vandergriff ready to knock you off.”

As for the fans that are getting tired of Torrence-dominated races on the NHRA Mello Yello Drag Racing Series Tour?

“We are just going to do the best that we can do because I’ve got some really good fans that do support us and cheer for us,” Torrence said. “And if you are not a fan and you are annoyed, then you can root for someone else. That is your opinion.”