OVER $100K AWARDED AT SFG-FTI WORLD SERIES OF BRACKET RACING 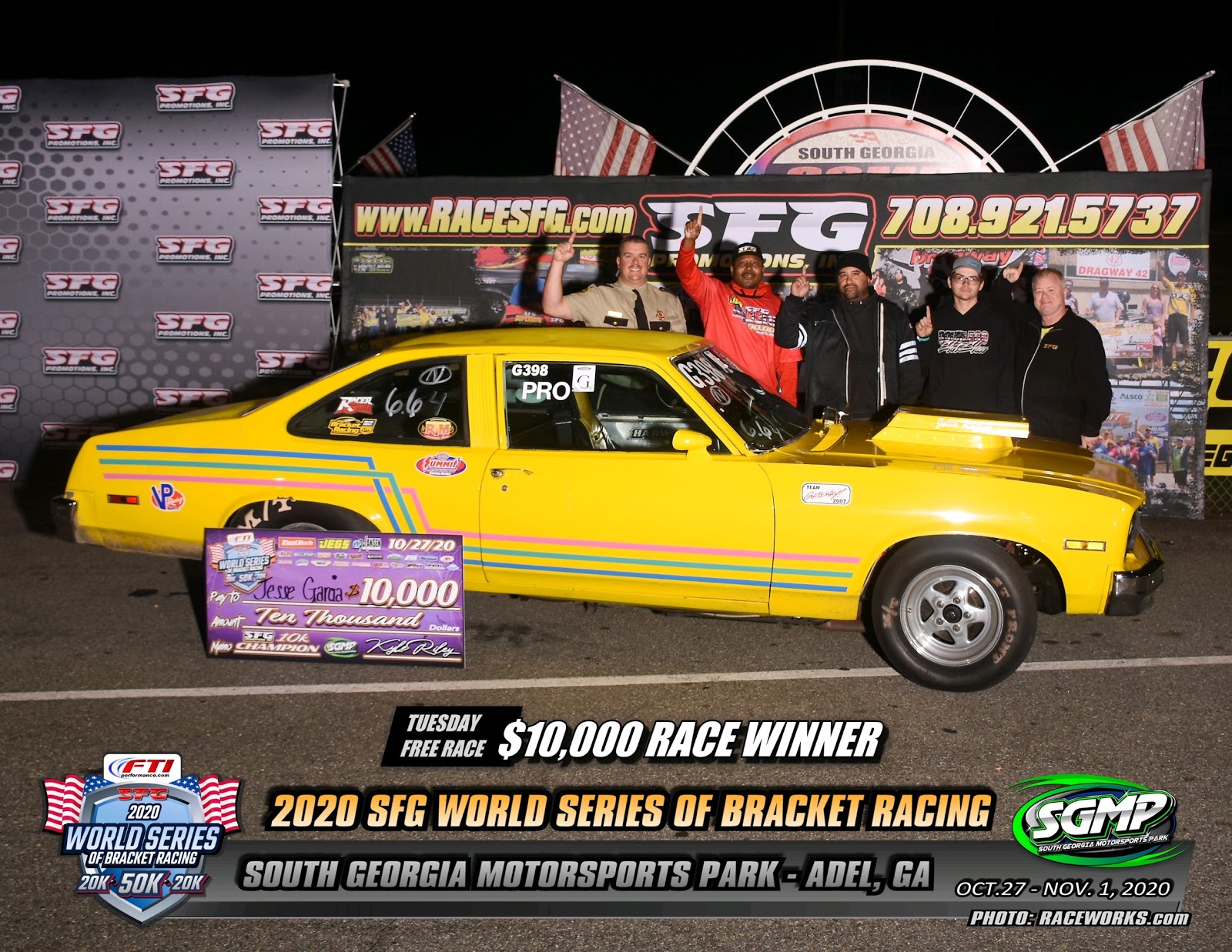 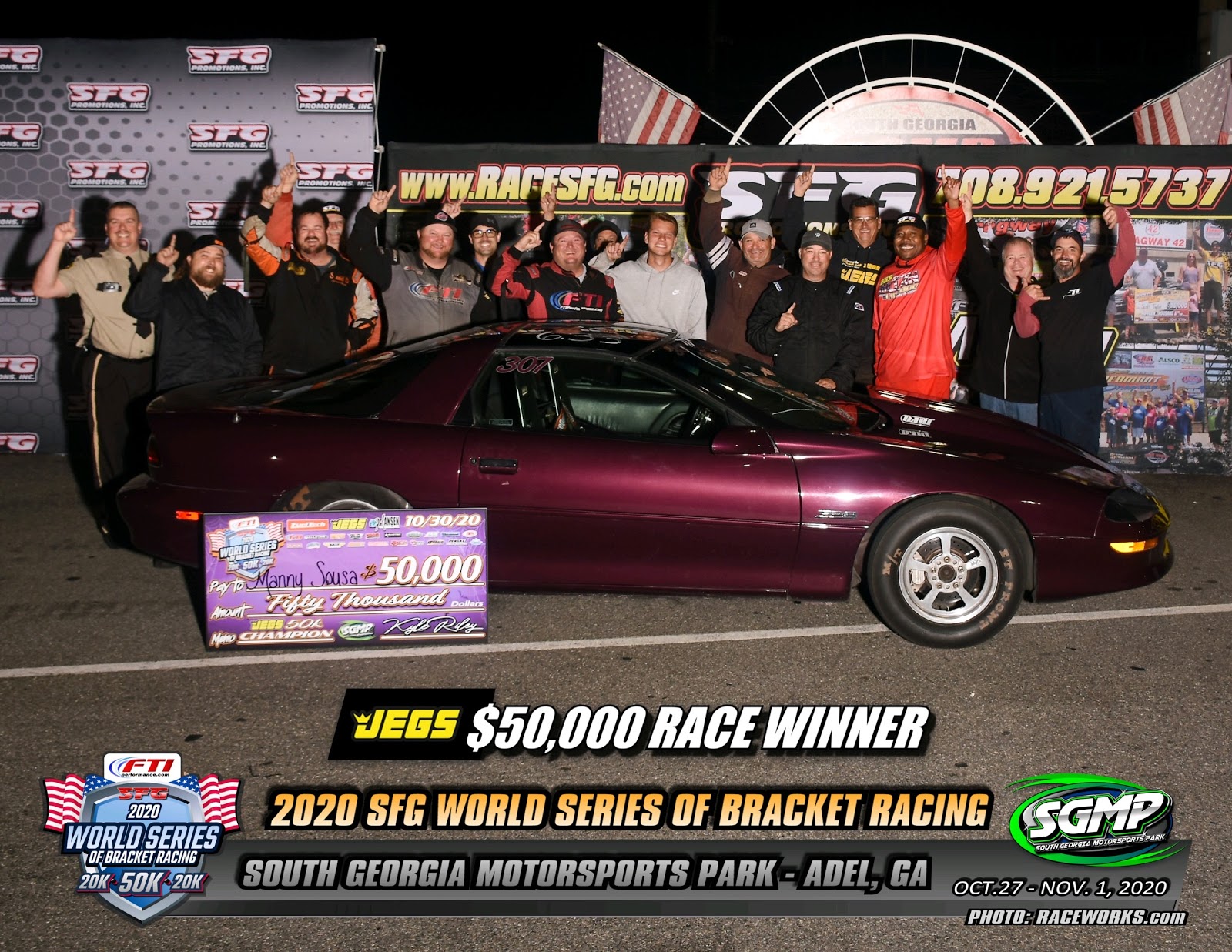 Despite disruptive rain and mist delays, SFG Promotions successfully awarded over $100,000 in prizes last weekend to racers across the country at the SFG- FTI World Series of Bracket Racing at South Georgia Motorsports Park. With the completion of this event, just one more SFG event remains in Kyle Riley’s (founder of SFG) 2020 campaign to give bracket racers the highest payouts possible for minimal entry fees: the Hansen Global- SFG Christmas Bracket Bash at Bradenton Motorsports Park which offers over $122,500 in winner payouts.

In the first completed race of the week (the free $10,000-to-win race), Jesse Garcia beat Lester Adkins while leaving off of the bottom bulb. In the finals, Garcia made a dead-on 6.676 run on a 6.67 dial-in; Adkins also ran a dead-on 4.648 on a 4.64 dial-in beside him, but couldn’t quite get there after Garcia’s abundant starting line advantage.

The next event completed was the JEGS $50,000-to-win main event in which Manny Sousa took the victory in yet another No-Box entry.

He defeated Claude Debonis in the final round: Sousa was .013 on the tree and ran 6.322 on a 6.31 dial-in while Debonis was an identical .013 on the tree and ran 4.496 on his 4.48 dial-in to be .004 seconds behind  at the finish line. Chad Six and Johnny Brannen were semifinalists in the main event, while Kendal Little, Gary Williams and Caroline McCarty ended their night as quarterfinalists. 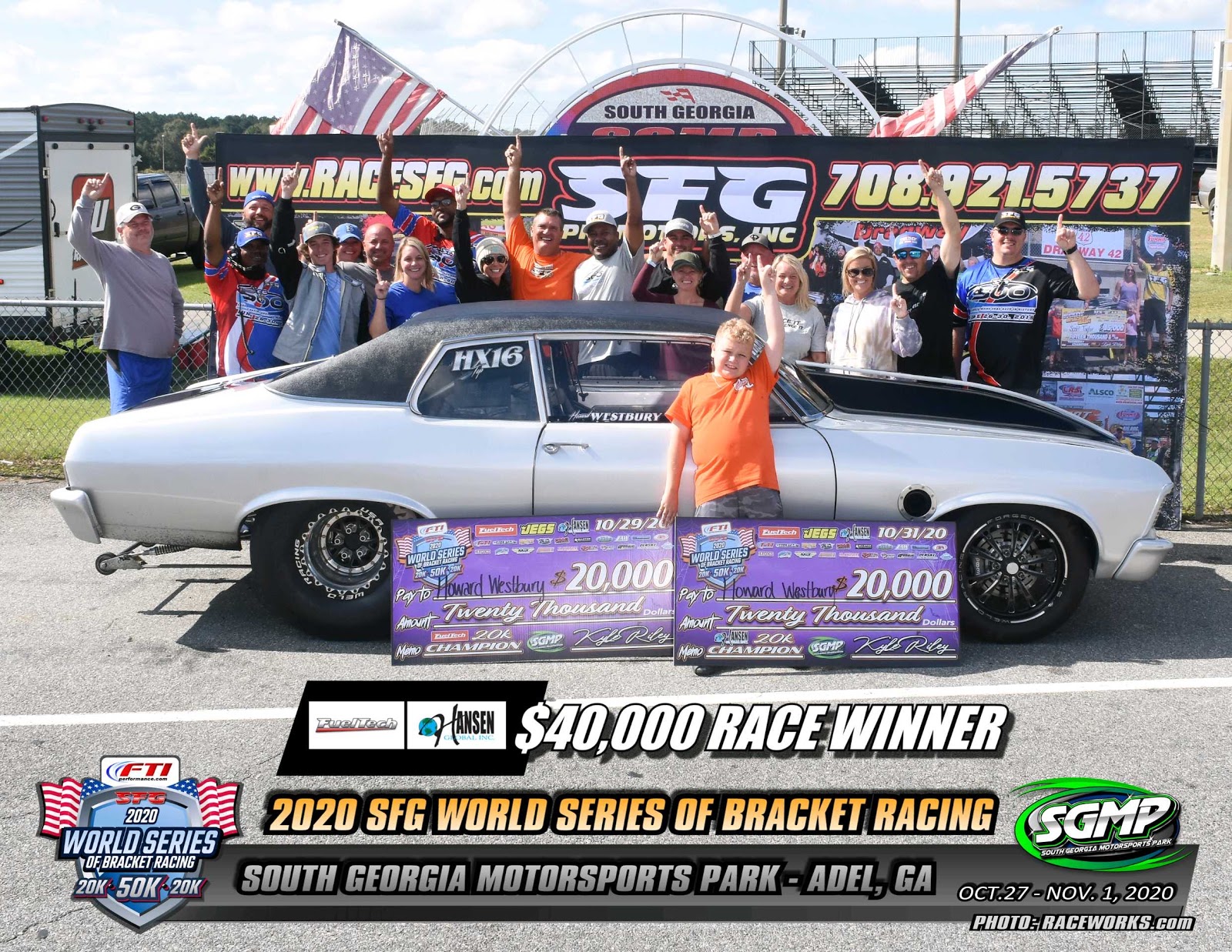 Due to weather, the two $20,000-to-win events sponsored by Fueltech and Hansen Global were combined into one $40,000-to-win event. Howard Westbury took the combined $40,000 prize after Dangerous Don Hansen red light by -.017 seconds in the final round.

During his winners circle interview, Westbury thanked Kyle Riley and SFG Promotions for their support of bracket racers and urged more sponsors to get on board with the race series. Westbury made this plea just moments after giving Riley as smooch as jokingly promised earlier if he were to win. Darrel Pittman and Caleb Ellison were semifinalists in the event, while Kevin Rodden, Lester Adkins and Andrew Davis made quarterfinal appearances.

After his win, Smith thanked God, his family and his friends. Brian Barnes was the lone semifinalist in this event while Sean Serra and Gary Williams were the two quarterfinalists. 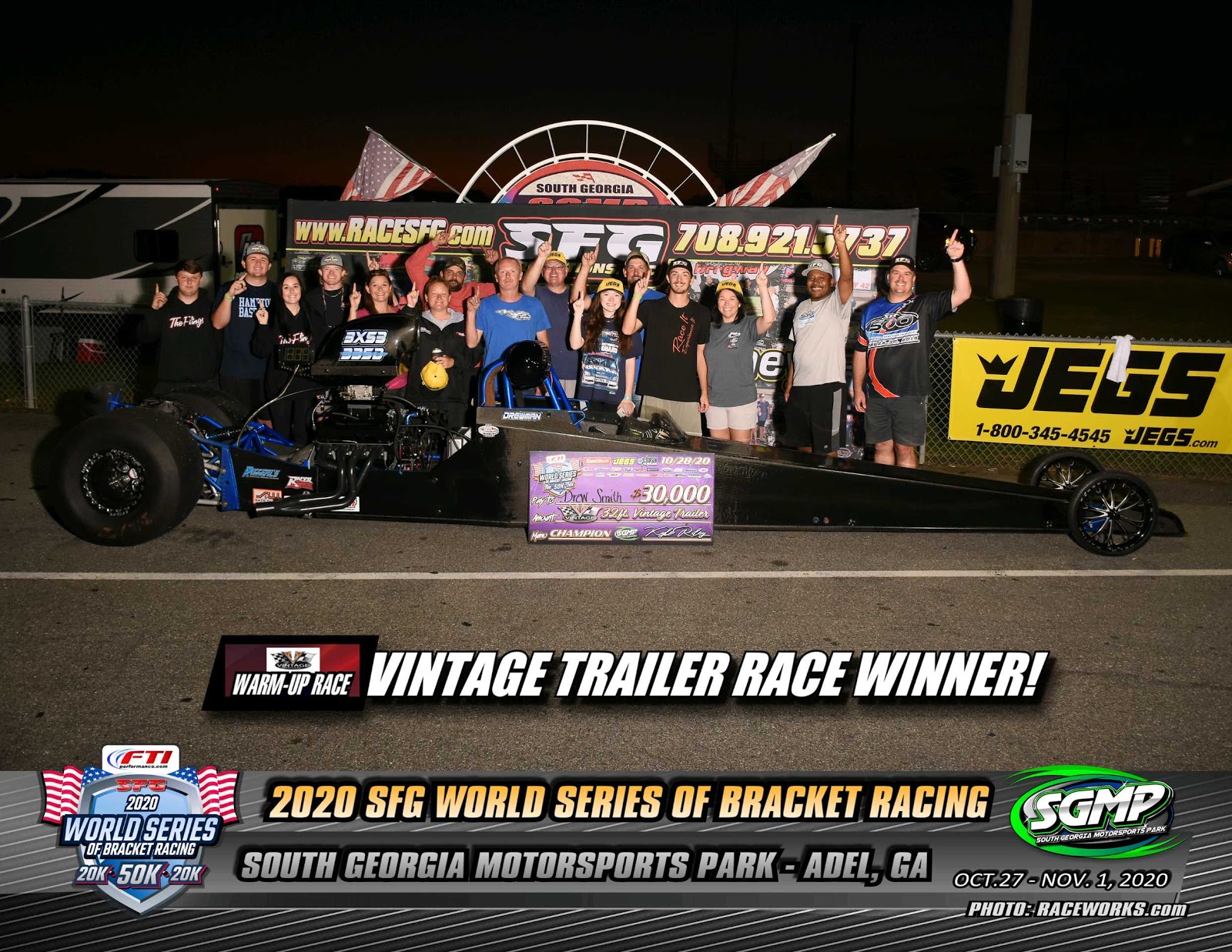 GARCIA SCORES THE BIG PRIZE AS THURSDAY ACTION RAINED OUT 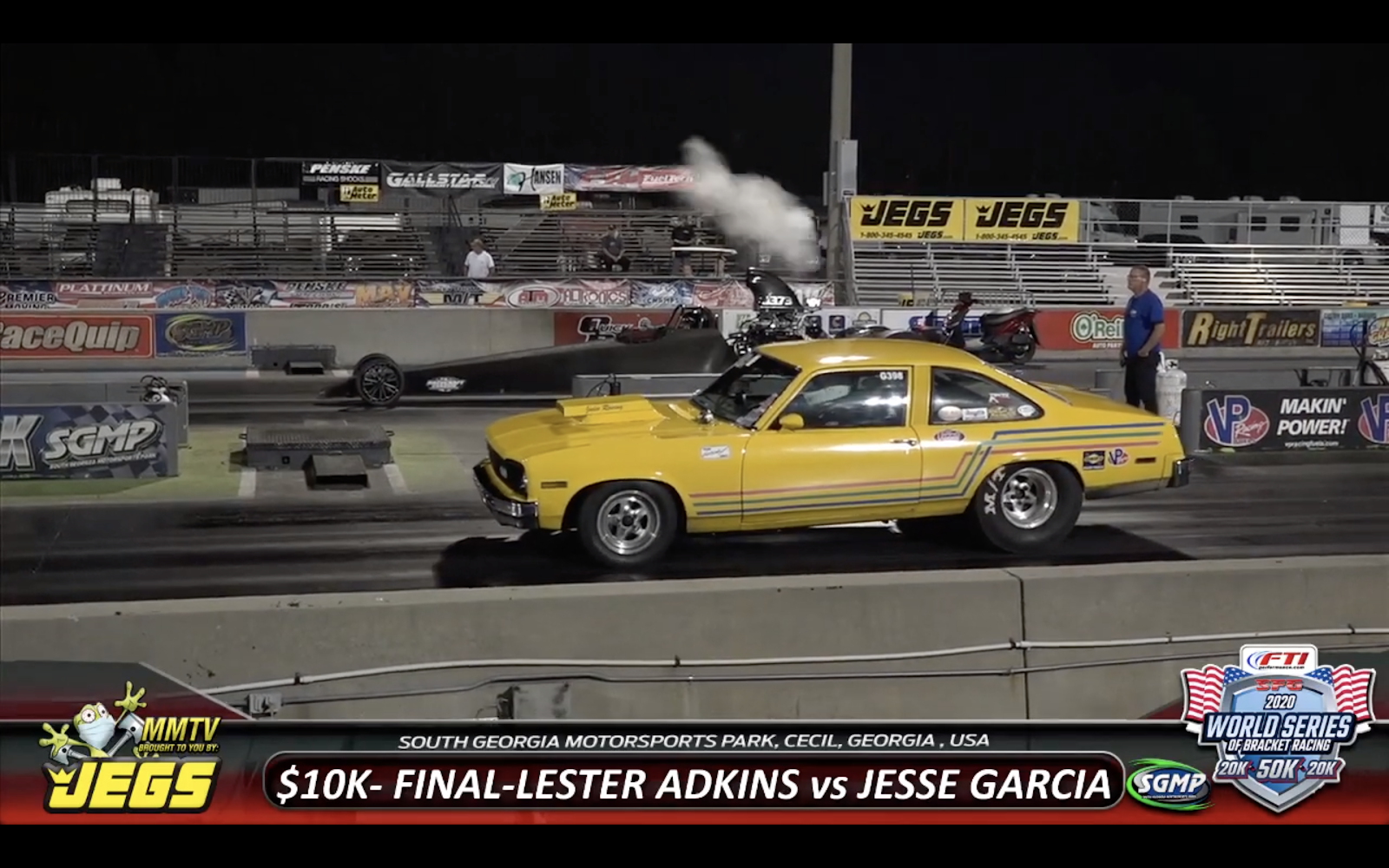 After battling weather delays, last night the diligent SFG Promotions team was able to crown its first of five winners this week at the SFG-FTI World Series of Bracket Racing at South Georgia Motorsports Park: Jesse Garcia. Garcia defeated Lester Adkins in the final round to take home the $10,000 winners check in a race that was free to every competitor who pre entered the event. Perhaps most impressive about Garcia’s feat was that he accomplished it without a delay box.

Before Garcia was crowned the winner, five fierce competitors remained in the eighth round (quarterfinals) of competition including Matt Dadas, Bill Swain, Dale Thaxton, Adkins and Garcia.

With three door cars and two dragsters left in the quarters, Thaxton took the bye-run on the door car side of the ladder.

In the round of three, no deals or splits were made and Garcia received the coveted bye-run to the finals. On the other side of the ladder, Adkins won in a less than spectacular race after Thaxton broke and never left the starting line. Adkins was still a respectable .012 on the tree before slowing to a 4.669 on his 4.64 dial-in.

In the final round, Garcia masterfully dropped to a dead-on 6.676 run on his 6.67 dial-in while Adkins was also dead-on beside him, running 4.648 on a 4.64 dial-in. After Garcia had a decisive advantage on the starting line, the bottom bulb racer drove his way to a late night victory in South Georgia. 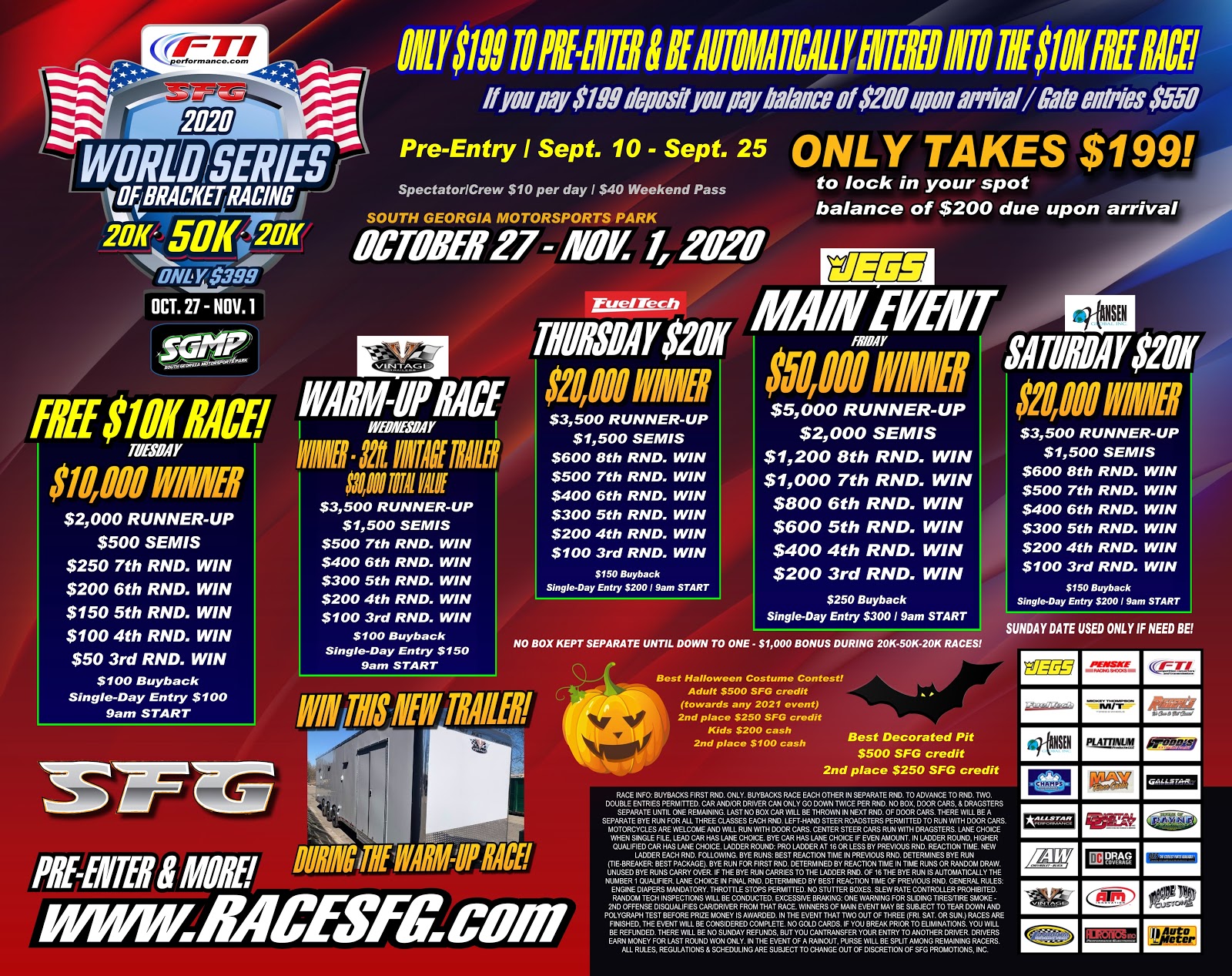 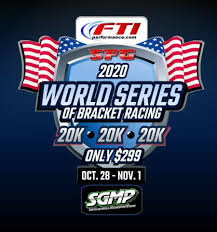 SFG Promotions, Inc. returns to South Georgia Motorsports Park this week to award life-changing money to bracket racers from across the country for the lowest entry fees in the industry. This time around, SFG is hosting the FTI Performance- SFG World Series of Bracket Racing which will feature a test and tune session today from 2-7pm, a $10,000-to-win race for $100 on Tuesday, a race for a 32 ft. Vintage trailer ($30,000 value) for $150 on Wednesday, a $20,000-to-win race on both Thursday and Saturday and a $50,000-to-win main event on Friday.

In classic SFG fashion, racers will have the opportunity to win additional prizes as valuable as $500 in SFG credit through a Halloween costume and pit decoration contest on Friday night.

"This is going to be an incredible race for Southeastern racers and those still hungry to compete after the shortened Million race at Montgomery Raceway Park,” says Kyle Riley, founder of SFG. “The SFG team and I can’t wait to give out another $100,000+ to the racers that support what SFG and our partners are doing!”

Motormania TV will be on the property bringing a live stream of the event thanks to support from JEGS High Performance. You can find the live stream of racing action, starting Tuesday on SFG & MotorMania FaceBook and YouTube pages and at MotorManiaTV.com. If you can attend the event in person, all-access passes are just $10 a day at the gate.