PEDREGON STAGGERING FROM ANOTHER 1-2 COMBINATION PUNCH 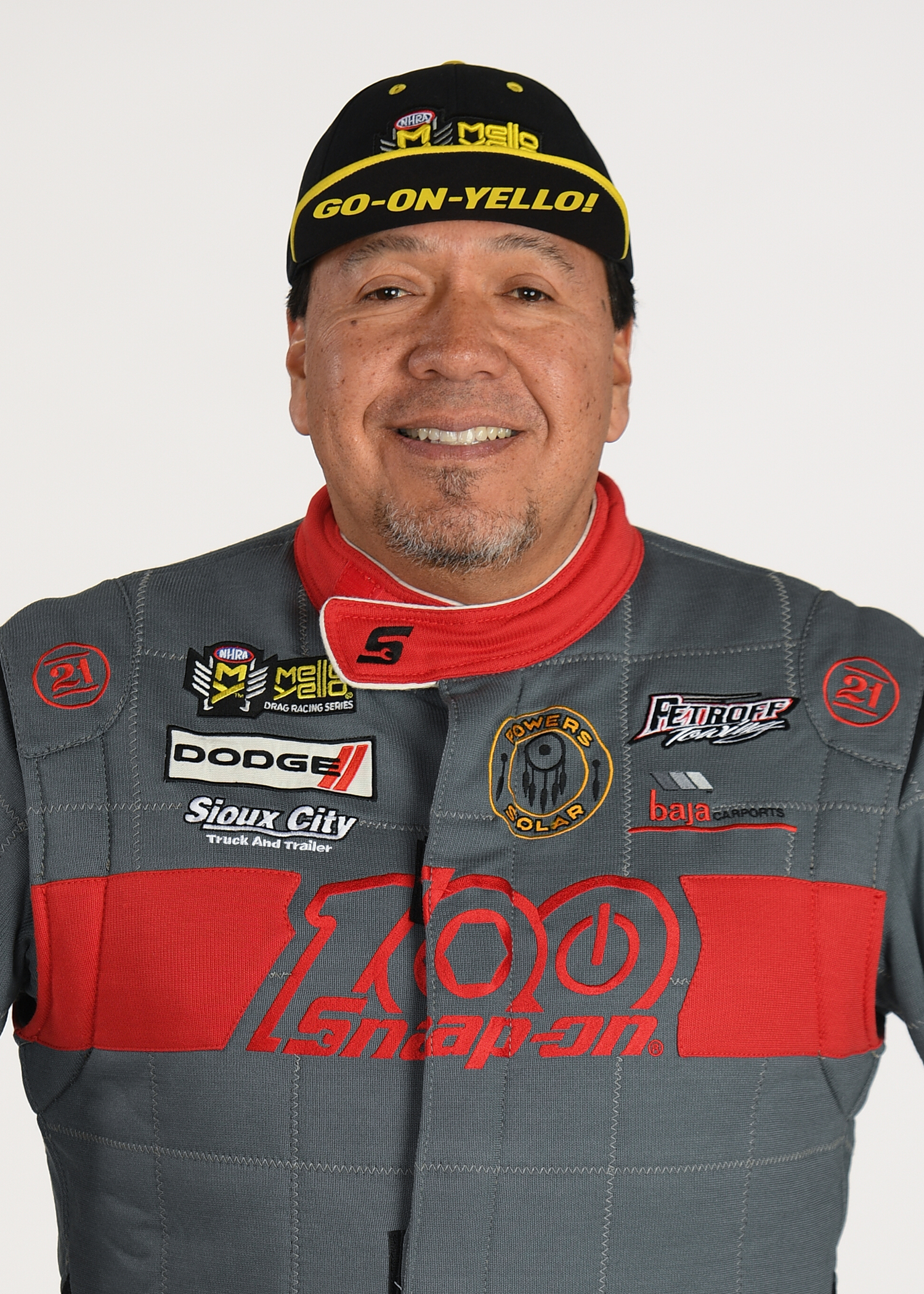 From Cruz Pedregon’s “What Possibly Could Go Wrong Next?” File . . .

The two-time Funny Car champion and his Snap-on Dodge team still are absorbing the shock of losing crew chief Eric Lane, who was killed Oct. 19 in an off-track accident at Mineral Wells, Texas, during what was supposed to be a relaxing fishing-trip getaway between the Dallas and Houston races. Meanwhile, they all have been trying to decide what Lane would have been instructing them to do at this final event of the season.

"It still hasn't fully settled in with us,” Pedregon said, “so we're pressing on to implement so many of the things 'Hop' helped us with in doing away with the things that weren't working on the car, keeping the good, and trying several new things.”

Compounding the task is that Pedregon has a completely different crew this weekend. Three of his team members tested positive for coronavirus. So the team owner and General Manager Caleb Cox scrambled Thursday to assemble mechanics.

As if that weren’t enough to deal with this weekend, the team’s tow vehicle was totaled here at Las Vegas Thursday as the result of another driver running through a red light at an intersection not far from the airport.

“Not a great way to end the year,” Cox said, adding that “I don't even know where to start” explaining how everything unfolded. But it all confronted him as soon as he stepped off the airplane. Once he turned his phone back on, he saw a message from one of the folks holding down the fort at the Brownsburg, Ind., shop, asking him to call. And that was the start of his uber-busy day Thursday.

“I found out that somebody had run a red light and totaled our tow vehicle. Thankfully, nobody was hurt in the accident, but I had to go back to the airport and get another tow car for the weekend,” he said. “I had to go check out the tow vehicle, look at all the reports. And it's pretty messed up. So that was tough.

“And then I found out two of my guys were pretty sick. So they went and got tested, just to be sure, and then right before we left to the track to start working they found out that two of them were positive. They were here. They were already here. But luckily, they were together. But the rest of the team, just to be safe, needed to go get tested,” he said.

“I called the NHRA and told them what's going on, because I don't want to hide anything from NHRA and I don't want to be the team that ruins it for everybody,” Cox said. “So I just want to play by all the parameters and all the rules. I talked to [the NHRA] doctor and kind of got his feelings of what we need to do, steps we need to take. The whole team had to go get tested. It came back. Everybody was negative, except for one person,” Cox said. 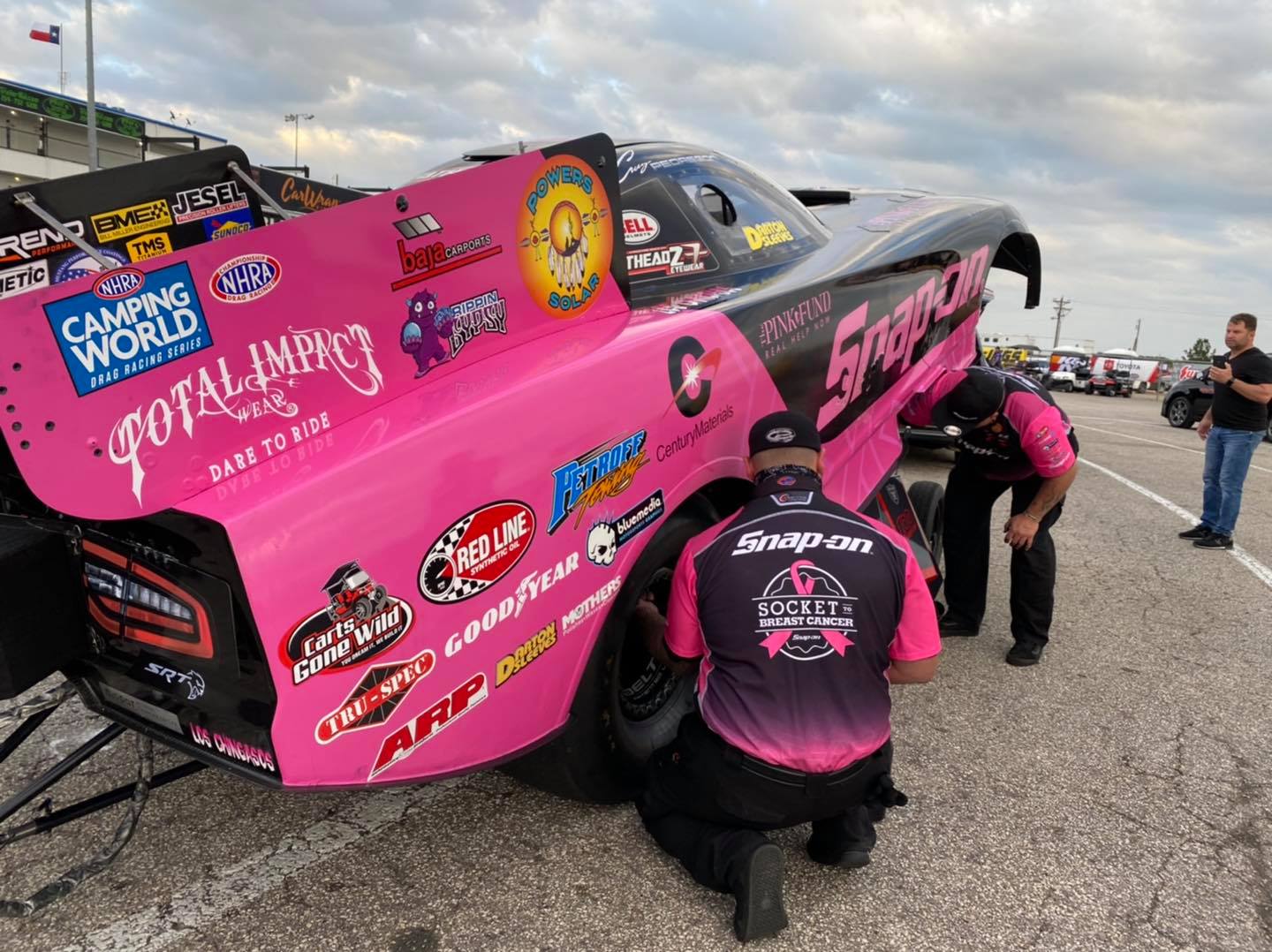 “So there [we were,] three men down. Due to the NHRA policy and doctor's recommendations that they had been around these people for more than 15 minutes in close proximity, even though they were negative, they're still not allowed out at the track, which is kind of frustrating – because if you look at the NFL, the MLB, and stuff like that. If we could get a second negative test, it could be possible for them to come out. Cruz is kind of upset about that. But you got to follow the policies that are in place. We're all playing on things that we don't really know about and so taking precautions, you got to.”

Cox said, “next was the logistical nightmare of finding an entire new crew in less than 24 hours.”

So while the bulk of the crew was in quarantine, Pedregon and Cox started reaching out to available mechanics.

“We were pounding the phones all day Friday, trying to get things done,” Cox said. “It's good to have a long list of drag-racing friends.

“I got guys like [supercharger expert] Nick Holm and Matt Thompson. Matt Thompson won a championship as Jack Beckman's clutch guy. They both live in Lake Tahoe. They drove down, and they got here about 3 a.m. Bobby Lane, Krista Baldwin's boyfriend, and Chris [“Warrior”] Kullberg, who used to be our car chief, they’re in Indy. Bobby was in North Carolina. Bobby was nine hours from Indy. He drove from North Carolina and made the plane by 10 minutes. Got out here. Then, Brad Littlefield, he was going to obviously crew Jason Rupert's car. But Johnny West said his car wasn't ready. So Brad drove over, and he’s doing our clutch. Then we might get one of the Scrappers guys [from Mike Salinas’ team] who’s actually going to be out here watching to volunteer to come in and help,” Cox said.

He said he and Pedregon are “thankful to have really good friends who want to help. We started the car last night [Friday], just to make sure. We wanted everything together to make it as [less stressful as possible]. We can't thank Justin Ashley's team enough, a couple of guys that have worked for us that are over there, and Del's team. Del sent some of his guys down to help put this together to make sure everything's right. So you can't thank those guys enough. Everybody coming together, asking, ‘What do you guys need? What do you need help with?’ When you think of the drag-racing community, how they rallied around Dom and Richie and Eric . . . If you need something done or need something to help, everybody is willing to help. That's great, and it shows definitely this weekend when you need a full team.” 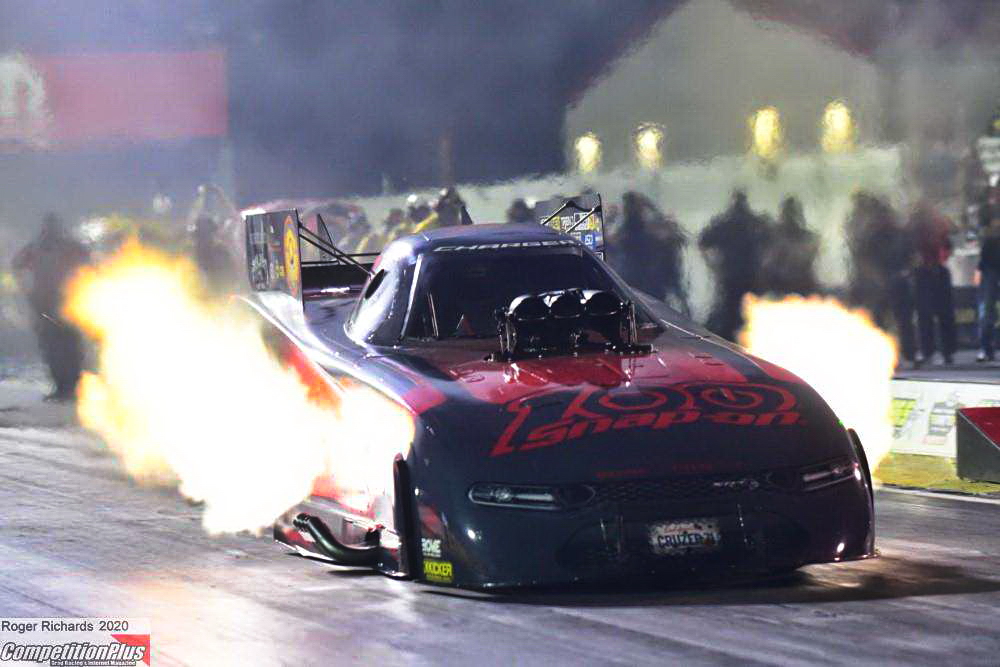 As for the tow vehicle, Cox simply went back and rented another car from National. (“It was just the quickest thing to do in that time frame,” he said.)

“I think we put together a pretty good team, and you still have Ronnie Thompson and Nick Casertano running it. I'm glad Ronnie came out last week and helped.

Cox said Pedregon hardly has the proper words to thank everyone who has helped.

“We’re kind of waiting for 2020 to be over and start with 2021. I don't want to find out anything else that could go wrong,” Cox said. “I just want to get through this safely. Get everything back to Indy and then just start working towards next year.”

Before they get started on next year’s plan, they’ll be attending next Thursday’s funeral for Lane at the Lane family’s home church, the Avon United Methodist Church in Avon, Ind. (6850 E. US Hwy 36; Avon, Ind. 46123). The November 5 service will begin at 2 p.m.  (Face masks will be required.) For those not able to attend in person, services will be available in a live-stream format through the church’s website, www.avonumc.com.  The link will be available closer to the date of the service. Burial will follow at the West Ridge Park Cemetery in Indianapolis.

Pedregon said Lane’s “impact during his short time with the team is already paying off in the success we had last weekend: making the best pass of our 2020 season and coming so close to a semis win, only to be denied it by a one-second holeshot." 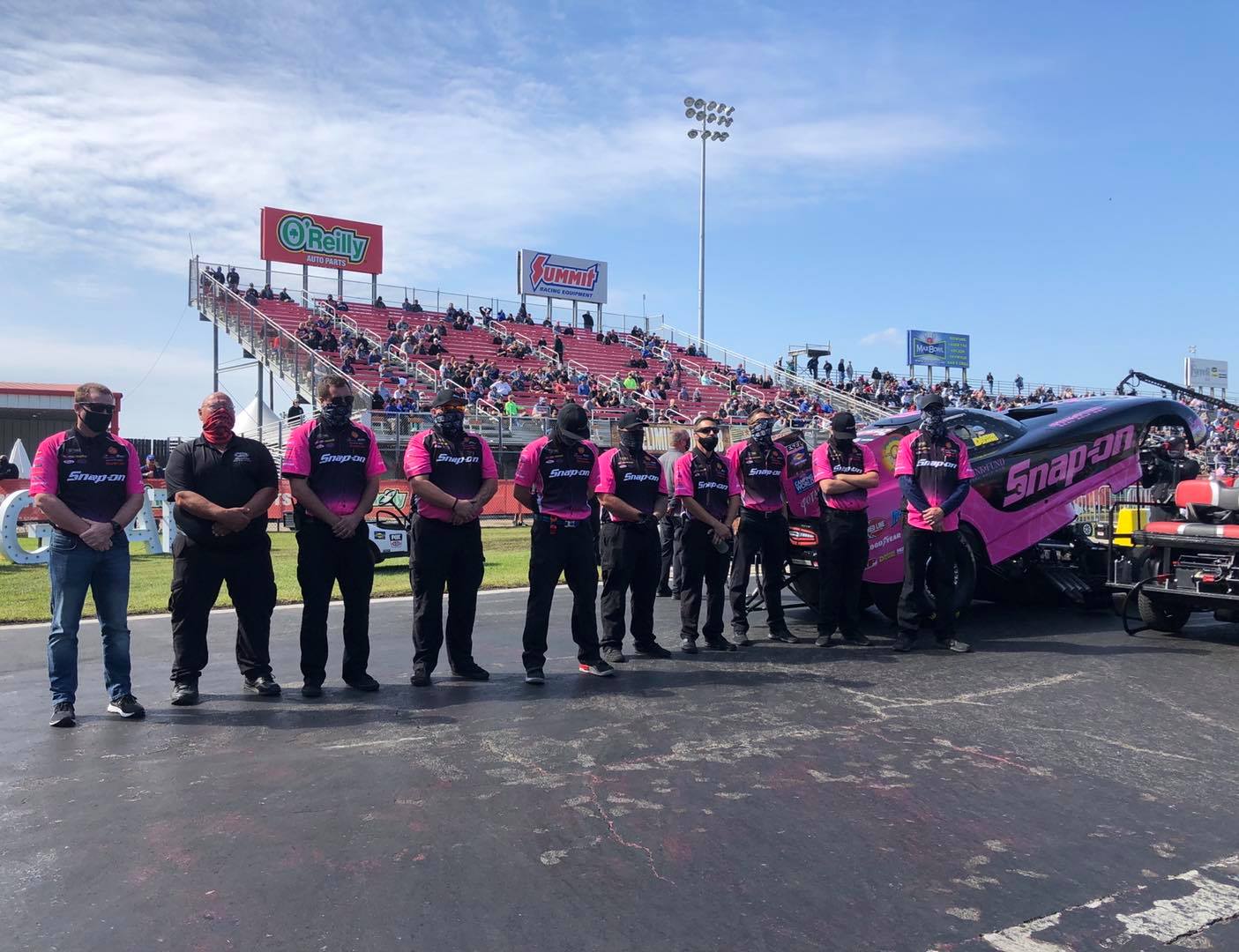 In memory of Lane, Cruz Pedregon Racing Team Manager Caleb Cox established a GoFundMe account that will help support Lane's wife, Kelly, and their young daughter, Melaynee. The fund has raised $41,725 as of Saturday afternoon. Many others have handed or sent private donations, as well, Cox said.

The team also will continue to pay tribute to the Pink Fund with its special paint scheme in honor of Breast Cancer Awareness Month. Snap-on, the team's primary sponsor, has dedicated a portion of sales to the Pink Fund in the past six years totaling $475,000. That contribution is earmarked to meet non-medical expenses of individuals undergoing breast cancer treatment.

Lane’s passing directly has affected one Top Fuel team, as well. Jim Maroney, who had raced with Terry Haddock and with Kim Davidson, relied on Lane when he started his own operation from his Gilbert, Ariz., shop and began at this race last year.

“He [Eric Lane] was my first crew chief on my first Top Fuel car as a team owner,” Maroney said. “We are going back to his tune-up, with the assistance of Johnny West, this weekend. He will be sorely missed by all of us on our team. He was helping us by phone up until the day of his passing, and we miss him tremendously. He was our friend, and our hearts go out to his wife and family.”