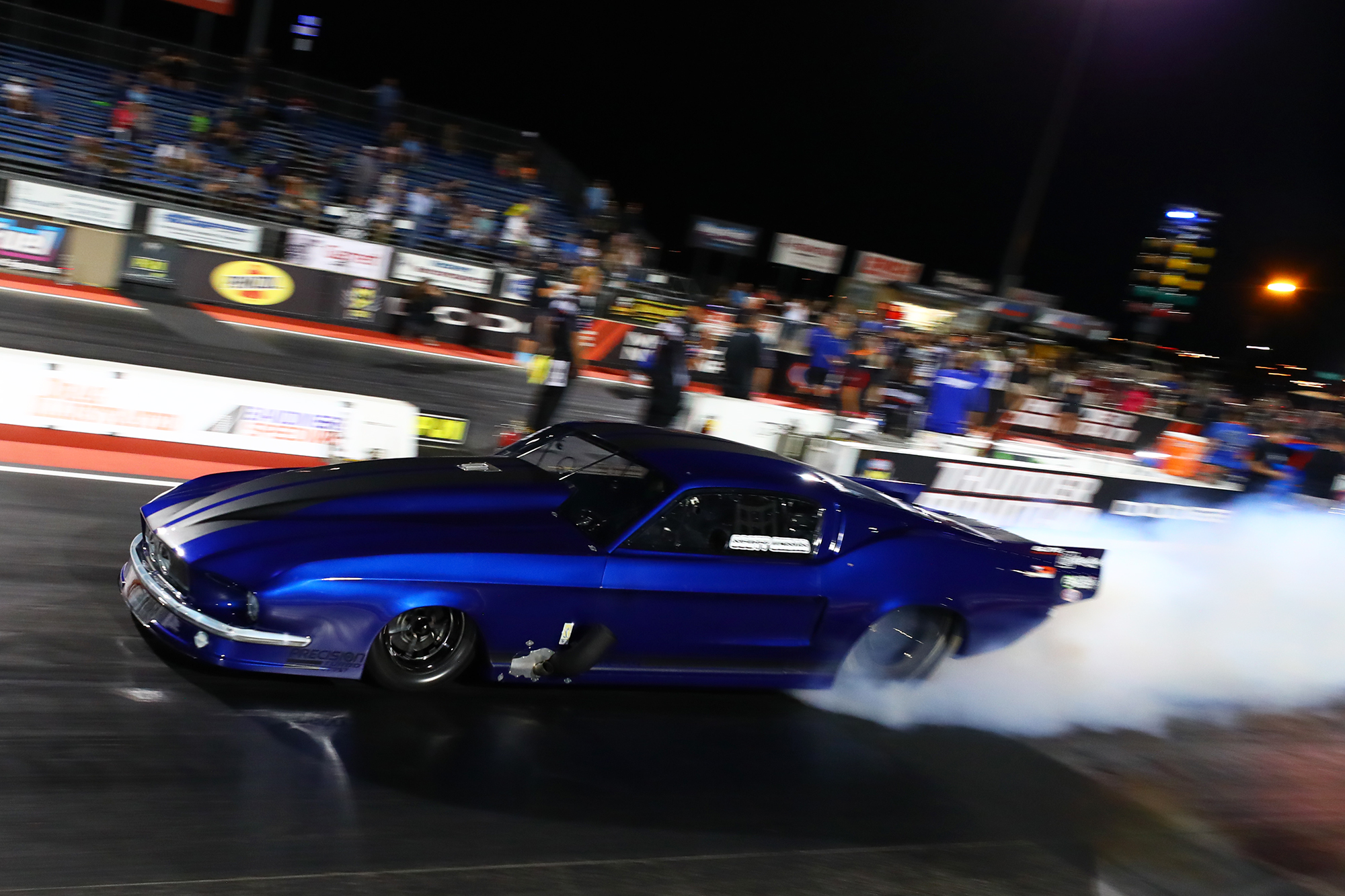 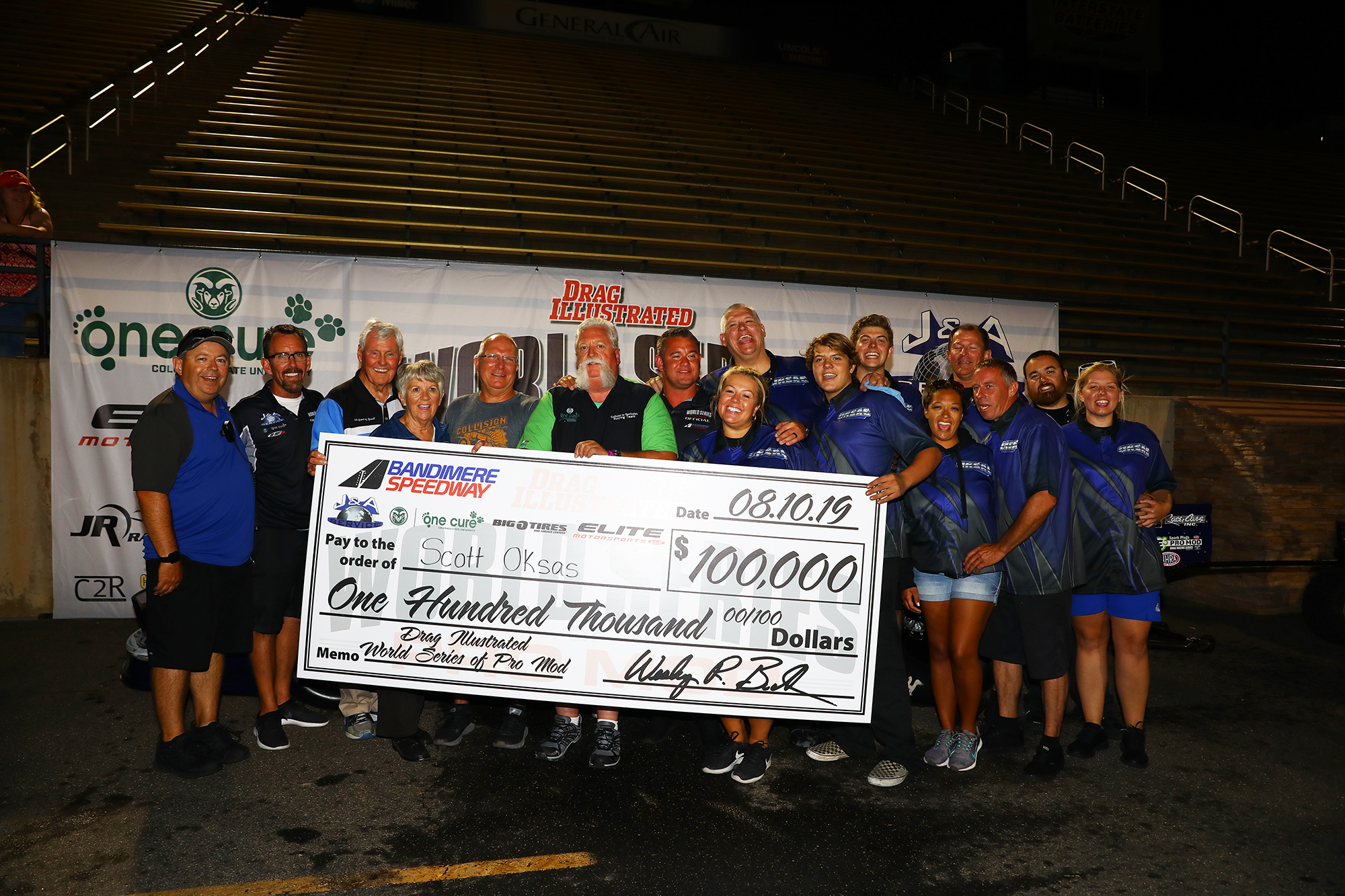 Scott Oksas started his Pro Mod career 10 years ago with the hopes of putting together a competitive program.

A decade later, he now has a win for the ages.

The Los Angeles-area native benefitted from some first-round luck against Stevie “Fast” Jackson and then rode a string of three straight incredible runs in his turbocharged RJ Race Cars Ford Shelby Mustang. That included a event-winning blast of 5.882-seconds at 247.38 mph in the final round against Doug Winters to claim victory at the third annual Drag Illustrated World Series of Pro Mod presented by J&A Service, Elite Motorsports, Big O Tires and benefiting One Cure at Bandimere Speedway.

With that comes a $100,000 check, a WSOPM championship belt and, by far, the biggest moment of Oksas’ Pro Mod career.

“It’s just pure excitement,” Oksas said. “This is just giant. I’ve busted my ass for 10 years doing this Pro Mod stuff, I’ve worked so hard and I can’t believe I’m standing here, I really can’t. To win this, it’s always been a passion of mine to win something like this. I can’t even describe it. It’s just overwhelming, it’s crazy.”

Oksas and his team were full of excitement in the winner’s circle on Thunder Mountain, celebrating a moment he never expected when he made his WSOPM debut a year ago.

Since then, Jeff Pierce came on board as the tuner and the progress with the Mustang, which was delivered just weeks before the race last year, has been remarkable. Oksas ran between 5.86-5.88 over the final three rounds, outrunning Winters and his blown ’69 Chevelle in the winner-take-all round.

Oksas and Winters posted identical .053 reaction times, but it didn’t take long for the Mustang to pull away. Once Oksas saw the win light, the celebration was on as the veteran excitedly yelled, “I just won $100,000” several times in the car before it stopped.

“I knew I was going to be ready. We had been pulling in and lighting the beam first all night and we had a gameplan with everybody,” Oksas said. “Jeff said just keep doing our thing and we just did our thing.

“I don’t panic anymore and the run was dead straight. I saw him next to me and at the 330 I just started to pull away. I knew he wasn’t catching this turbo car.”

Oksas figured it might have been his night after slipping past Jackson, the NHRA Pro Mod points leader, in the first round after Jackson went red by .020. That threw away a 5.932 – the quickest run ever by a blower car in Denver – and handed the victory to Oksas, who went 6.071.

“That guy is a world-class racer and that was the most scared I’ve ever been in my car,” Oksas said. “But after that it was just sweetness. He red-lit and I knew after that we were going to do our thing and win this thing.

“That was my lucky pass of the day and I needed that. Then, Jeff took over and he literally didn’t touch it from that pass in. It was crazy. He said, ‘We’ve got a hot rod. Go send it.’ I told him no problem.” 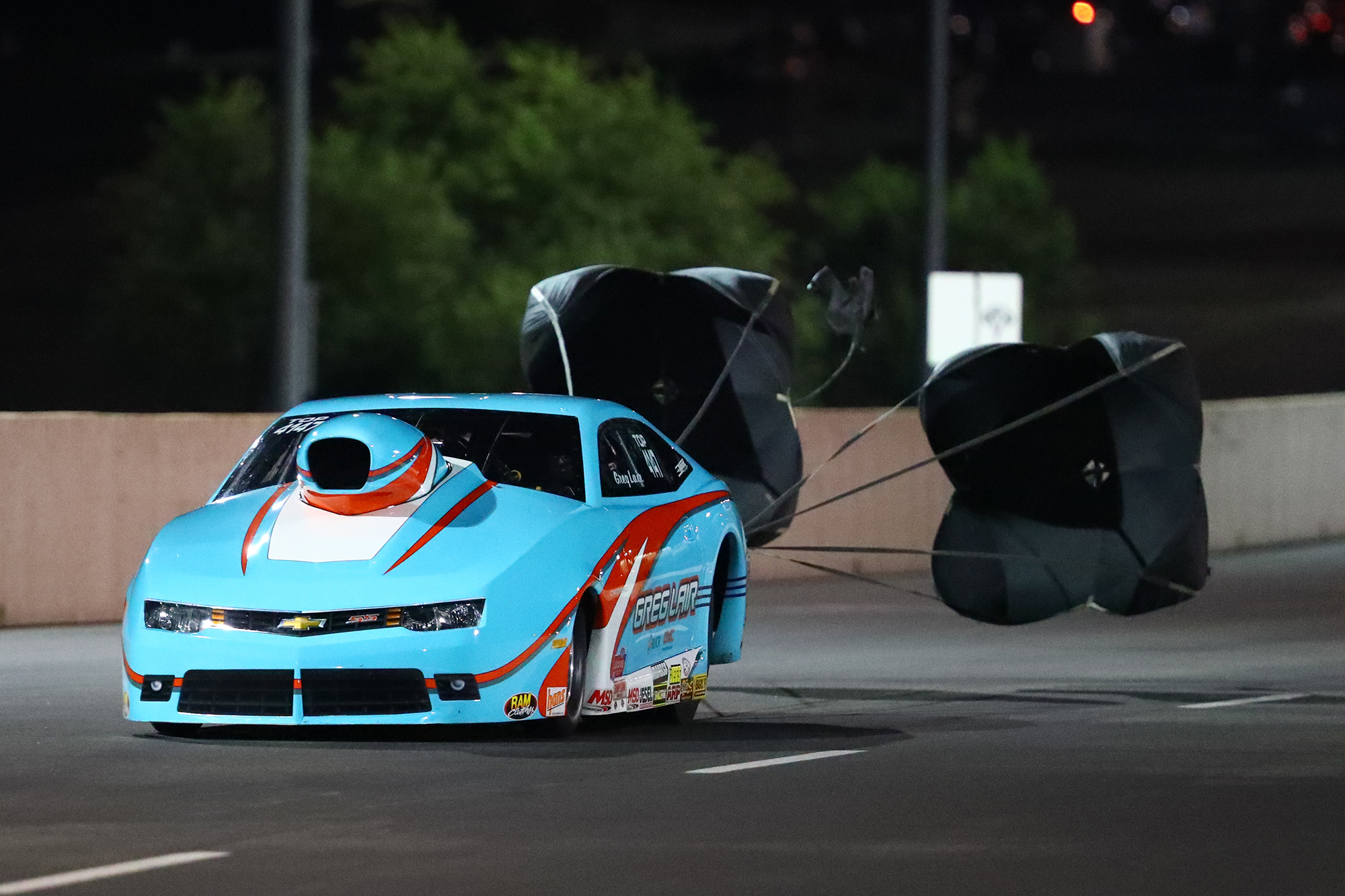 From there, it was game on and Oksas and his Mustang delivered one massive blow after another. He went a blistering 5.863 at 247.57 to beat Rick Snavely in the second round, topping Rick Hord in the semifinals with a 5.872 at 247.79.

That set up the meeting with Winters, who went 6.012 at 231.56 to beat Terry Haddock in the opening round. Winters had byes in the next two rounds after defending champ Carl Stevens Jr. broke and couldn’t make the second round call, but nobody could match Oksas’ pace.

“We said, ‘Let them come beat us,’” Oksas said. “You can’t ask for anything better than how we ran. It’s just a tribute to Jeff and this entire team.”

Oksas, though, was confident in the weeks leading up to the event, knowing the improvements his team has made in the past year.

By the second run in testing (5.96), he had already surpassed what he ran on Thunder Mountain a year ago, improving to a pair of 5.92s on Friday. A day later, Oksas’ confidence and belief he could win was fulfilled, capped off by an epic winner’s circle celebration.

“He doesn’t go into this to lose and he’s happy no matter what, and he kept telling me we were going to win,” Pierce said. “This morning I woke up and just had that feeling. We had that lucky around against Stevie, and then we fixed one problem and tried to keep it consistent. The car’s been great and has been straight as a string. It’s pretty incredible.”

In addition to the Pro Mod main event, the World Series of Pro Mod included competition in a handful of other classes, including the addition of the PSCA’s Xtreme Drag Radial class.

Over 40 Top Dragster entries attempted to qualify for the MagnaFuel ProStar 16 Shootout presented by Menholt Auto Group. For the second consecutive year, the final round came down to a pair of out-of-state racers, this time racing for a $10,000 prize. JB Strassweg in his nitrous-assisted Meyer Distributing dragster used a .001 reaction time to defeat EmiLee Novak in a double-breakout final round, with Strassweg running 6.288 at 211.63 on a 6.29 dial-in and Novak going 6.269 at 220.66 on a 6.30 dial-in. Novak cut a .004 light in her supercharged Novak Electric dragster. 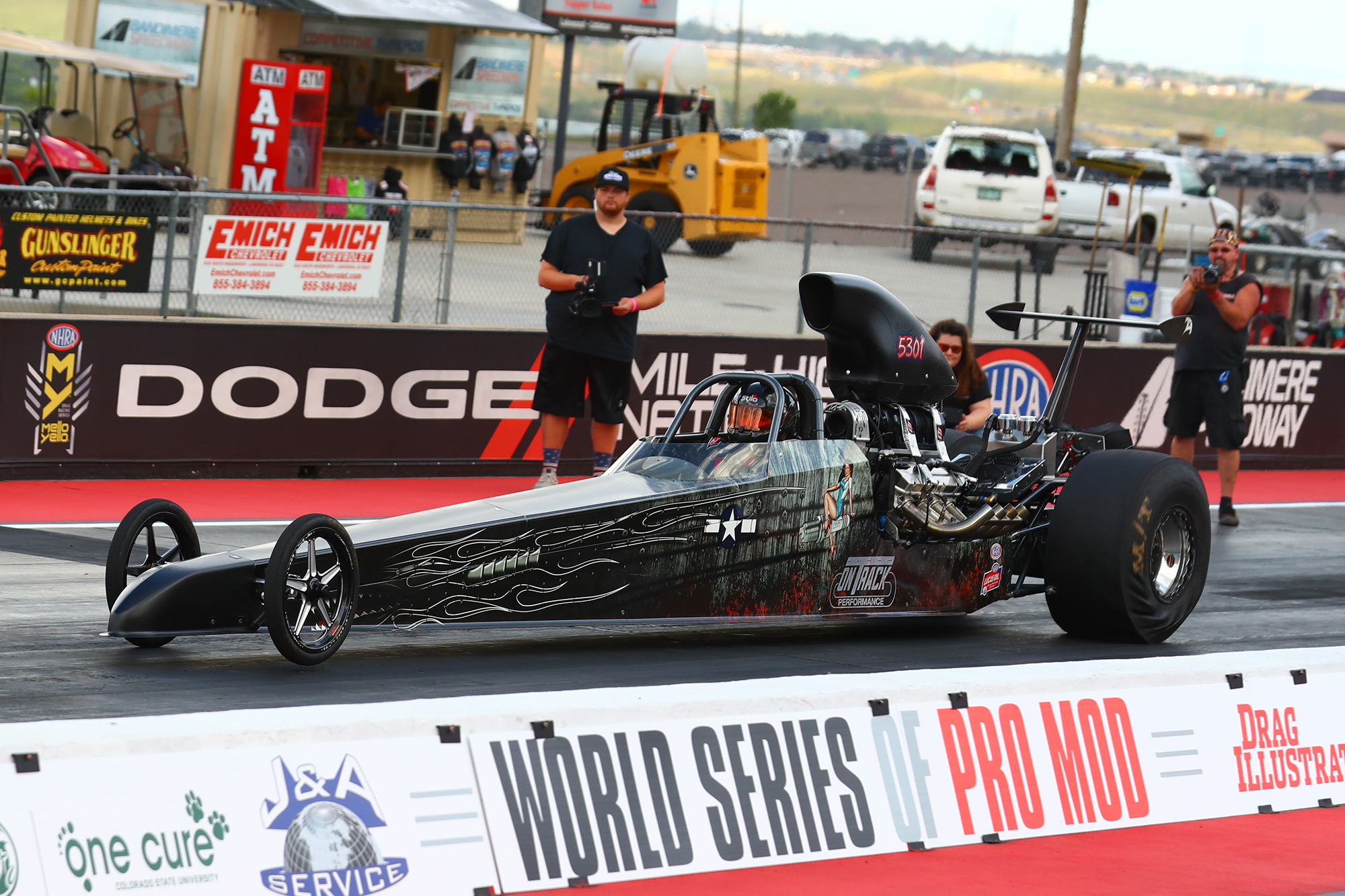 The MagnaFuel QuickStar 16 Shootout presented by Menholt Auto Group saw a similarly high number of cars try to qualify, with over 32 Top Sportsman cars on the grounds. Canyon, Texas’ Greg Lair won the $10,000 prize when he took out local favorite Mike Candelairo in the final round. Lair left first in his naturally aspirated ’15 Camaro and recorded a 6.883 at 200.44 on a 6.90 dial-in, while Candelairo also broke out with a 6.283 at 227.50 in his supercharged ’57 Chevy Bel Air. Lair also won the NHRA Mile-High Nationals at Bandimere in Top Sportsman in 2018 and 2019.

The surplus of Top Dragster and Top Sportsman entries allowed for a second-chance race for the non-qualifiers. Thirty-six entries took part in the One Cure Shootout presented by On Track Performance, John Low LPD and Corridor Collision. Tony Stark, Top Dragster winner at the 2019 Mile-High Nationals, picked up another big win at Bandimere in the One Cure Shootout final round. He left the line first and ran a 6.716 at 185.97 on a 6.70 dial-in in his Lakewood, Colorado-based Undercover dragster next to Ethan Conyers, who went 8.107 at 166.31 on a 8.08 dial-in in his ’63 Corvette roadster.

A massive Xtreme Drag Radial field also showed up at Bandimere Speedway, with Brandon McBride ending up on top thanks to his run of 4.784 at 167.26 in the final round to beat Lance Knigge. McBride qualified 14th in his ’74 Skyline, getting a first-round upset on a holeshot. His best run of eliminations came a round later with a 4.705 at 169.49, advancing to the final round thanks to a pass of 4.735 at 170.26 to beat Derek Cooper.

The future stars of drag racing squared off in the JR Race Car 7.90 Shootout, as Wiggins, Colorado’s Dalton Allendorf secured the final-round win in his ’15 JR Race Car dragster by running 8.306 at 65.18 to defeat Aurora, Colorado’s Jay Everhart in his ’05 Motivational dragster. Everhart slowed to a 12.221 at 31.06 in his runner-up effort.