As Ron and Shelley Capps prepared for a garage sale last year at their Carlsbad, Calif., home, they sorted out unused or unwanted items they figured they could part with. They rediscovered a few spacious storage bins filled with LEGO pieces, many of them from a massive Star Wars-themed set – “We have a huge amount of LEGOs still,” the 2016 NHRA Funny Car champion said.

Capps recalled fondly that the assembly instructions came in a 20-25-page pamphlet. (“The next thing you know, you’re up till three in the morning, drinking wine and trying to put this LEGOs Star Wars thing together for your son,” he said with a laugh.) But Caden Capps is 17 years old now, so Mom and Dad thought maybe the LEGOs could go to another good home.

They asked Caden and older sister Taylor if they wanted to sell the LEGOs, Capps said, and within minutes they could hear their kids upstairs, dumping their beloved blocks into piles and playing with them again. Dad couldn’t resist joining in the fun, too. Of course they love LEGOs – just a couple of exits up the freeway is LEGOLAND California theme park.

So Capps, who has raced a Dodge on the dragstrip for about 18 years, can understand how the automaker’s new marketing partnership with the iconic building-block company will be a huge hit with the really young demographic the NHRA is trying to hook on the sport.

Actually, the initiative by Fiat Chrysler Automobiles’ Dodge brand has kindled a bit of déjà-vu for Capps. One of his favorite childhood memories is playing with Mattel’s Hot Wheels, which piggybacked its popularity onto the drag-racing rivalry between his future boss, Don Prudhomme, and Tom McEwen. This LEGOs/drag-racing connection is a genius variation. Just as Baby Boomers grew up along with NHRA founder Wally Parks’ vision, today’s youth can return drag racing to the mainstream of pop culture.

The ad screams that. A young girl is caught up in her reverie, playing with her LEGO-built race car and imagining herself rocketing down the dragstrip in a burst of horsepower, shutting down whoever is in the next lane. The ad cuts to a determined-looking female LEGO figurine before reality is restored and the gearhead dad, who had been in the background, tinkering on his car, proudly approves of his daughter’s interest in drag-racing a Dodge.

It’s a perfect tie-in with the message of Steve Beahm, head of parts and service (Mopar) and passenger-car brands (including Dodge) for Fiat Chrysler Automobiles (FCA).

A former longtime bracket racer, Beahm has high sales hopes for the high-performance Drag Pak for racing only and the Dodge Challenger 1320 (which he said “gives you a lot of elements of the Demon”) and the Dodge Challenger SRT Hellcat Redeye that are geared for grassroots racers. They’re a far cry from the ’69 Road Runner he started with at age 16, but he indicated they can catch on with muscle-car enthusiasts like his popular ’69 Plymouth Road Runner once did.

“We felt like we need to give the everyday Joe or Jane an opportunity to drive a car to work and on Saturday night maybe take it to the track.” Now, with LEGO’s help, Joe’s and Jane’s kids can build their own race cars and weave their own dreams of the dragstrip.

The Dodge/LEGO ad declares, “Domestic. Not Domesticated.” To the world outside of drag racing, that seems ground-breaking; for the drag-racing “choir,” it’s not a new sermon. The NHRA has crowned female national champions in each of the past five seasons: 2014 and 2015, Erica Enders (Pro Stock); 2016, Mia Tedesco (Super Gas); 2017, Brittany Force (Top Fuel); 2018, Leah Pritchett (Factory Stock Showdown). Before them were Shirley Muldowney, Angelle Sampey, and more than 100 Wally trophies handed to female race victors.

However, Beahm spoke in gender-neutral tones when Dodge announced its LEGO enterprise: “We know that many of our Dodge SRT enthusiasts become fans of the brand at an early age, and like me, also grow up building LEGO vehicles that we dream of one day driving on the road. With the new Speed Champions set featuring the 2018 Dodge Challenger SRT Demon and the 1970 Dodge Charger R/T, our youngest fans can build and jump into the ‘driver’s’ seat of two of their ultimate fantasy muscle cars.”

The LEGO Speed Champions 2018 Dodge Challenger SRT Demon and 1970 Dodge Charger R/T toy-car playset features a buildable Challenger SRT Demon and what promotional material describes as a “muscular,” buildable 1970 Dodge Charger R/T. Both have a mini-figure cockpit, wheels with rubber tires, removable windshields, and authentic design details and decorative stickers. The Demon comes with two sets of rims, rear spoiler, and dual exhaust. The Charger is complete with removable supercharger and alternate engine cover, and translucent light-style elements. Underscoring the drag-racing emphasis is a buildable, lever-operated Christmas Tree start-light with translucent light-style elements. Three mini-figures, including an official starter (a “race marshal,” in LEGO lingo), along with Challenger- and Charger-branded driver's helmets (and a checkered flag that’s not used in the sport.)

“You can’t deny that LEGOS are huge and have been,” Capps said. “Anytime you see our sport out in the mainstream with something cool like that, it really makes you feel good. To see Dodge step up, it’s a big deal. And when they do something with LEGOs like this, that’s huge.”

Beckman said, “LEGO is a billion-dollar-sales company. It’s unbelievable how big they are.” He said the spectrum of themed kits is “stunning.”

The fact the latest is coupled with drag racing, Dodge hopes, surely will enhance brand loyalty.

And that’s not just among the kids. Chris Stamp, senior designer, LEGO Group, said, ”We are thrilled to bring the exciting Dodge designs to a LEGO build and play experience that is sure to capture the imaginations of not only LEGO fans, but also car lovers and the passionate community of Dodge enthusiasts around the world.”

Throughout his career, Capps has observed and come to understand how such programs and partnerships develop.

“This is my 18th season to represent Dodge. I started with the Stratus body, when [Gary] Scelzi and I were teammates and he was the Mopar guy. It has been fun, and I’ve been lucky to have input over the years with Dodge,” he said.

But he said Beahm’s leadership has shown his company’s passion for the sport, much like the way the highly respected Herb Fishel shaped General Motors’ involvement in drag arcing. 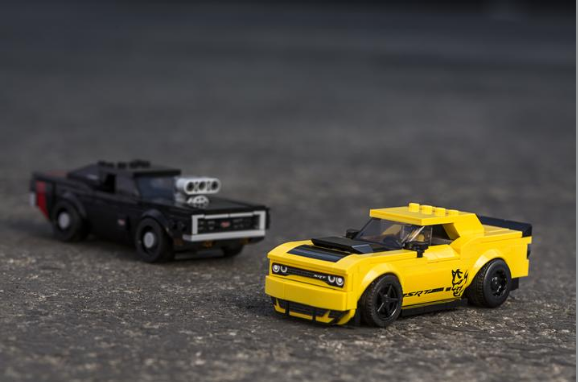 “It takes somebody at the top of the corporation. When I drove for Don Prudhomme, we were Chevrolet. Herb Fishel was the big guy there. Back then, when Camaro came into the sport with our Copenhagen car, that was all Herb Fishel. And he really drove the motorsports [program] for GM. So it took a guy like that at the top of the food chain. And that’s what Steve Beahm brings. He is a racer. He understands it. But he also knows the history of Hemi with drag racing.”

Beckman said he found Beahm to be accessible and intuitive when they first met at Denver at the Dodge Mile-High Nationals for the unveiling of the Challenger Hellcat Redeye, casually chatting before the formal presentation.

“We were just having a nice conversation. He certainly was a car guy, approachable and easy to talk to. I knew he was there with Dodge – I just didn’t really know he was ‘The Guy.’” Beckman said of his initial impression of Beahm. Then, when Beahm stood up to make his corporate remarks, Beckman said he realized just then, “Oh! This is the guy who’s in charge of the whole program! Very cool!” The 2012 Funny Car champion said, “You can tell he’s a very hands-on nuts-and-bolts guy. He’s not a corporate guy. He’s a car guy in a corporate position.”

From a respected driver, that’s the highest compliment.

From the public, that’s the highest compliment.

The company name – LEGO – is founder Ole Kirk Kristiansen’s combination of the Danish words “leg” and “godt,” which translate to “play well.”

This corporate connection is playing well, all the way around.