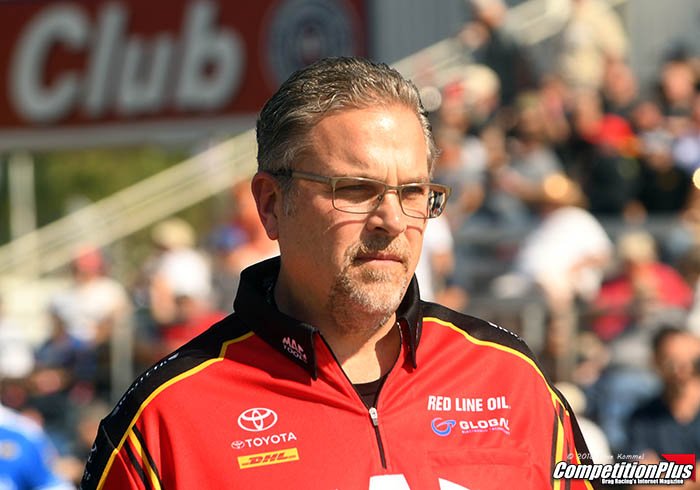 Jim Oberhofer admitted he wanted to take a break from drag racing, and for the former crew chief for Kalitta Motorsports, his sidelines stint will be a brief one.

Oberhofer will join the Hennen Motorsports Top Fuel team, driven by Kebin Kinsley, at the NHRA FallNationals in Dallas, Texas.

It's not a full-time deal, but a one-race deal where Oberhofer will step in the crew chief/tuner role vacated by previous crewchief Donnie Bender, who has reportedly been elevated from part-time to full-time status at Kalitta Motorsports.

"I am going to help them at Dallas," Oberhofer confirmed. "I've known Roger Hennen for a while, and a lot of the parts he runs on the car, he bought from Kalitta Motorsports. With Donnie there, it made it easy for us."

Oberhofer said the weekend will be a refreshing change in an industry where he's worked at the same place for many decades.

"I needed a change," Oberhofer admitted. "It's really nobody's business any details but things just change. I just thought at times, do I really want to race anymore? This life can take its toll on you.

"I want to go out there and have fun."

Hennen believes the time is right to make this move.

"We knew when we picked up Donnie Bender that he worked for Kalitta, and that Kalitta is the priority and we completely understand that," Hennen said. "Mr. Kalitta and Jim O have been very instrumental in me getting to go Top Fuel racing. So, it’s all good.

"Without a crew chief, we didn’t want to bring just anybody in. I knew Jim O is not tuning anybody’s car right now, so I reached out to him last night and asked if he would like to come to Dallas and tune this car and hang out with us, and he was excited to do it.

"We were running .70s last year, and I made the decision to step up from Stage 6.5 heads to Stage 7, which all the big guys are running, to up our power a little bit and see if we could maybe run some high .60s, low 70s. Then once we made that swap, the track prep changed a little and we’re making more power and we just have not been able to get a grip on it. My guys and Donnie have been doing a good job trying. A lot of people think it’s easy to run these cars, but it’s very difficult.

"Jim O is how I got into the Top Fuel racing. We have become quite good friends the past few years. Everything I bought through Kalitta over the past few years, it has done exactly what he told me it would do. Jim O’s been very, very honest and very forthcoming. He has never misled us. He’s a good friend."

https://t.co/ZcYCDBpgde broke the news earlier today of the shocking move over at Kalitta Motorsports https://t.co/Sjb2t5UxVJ

The chance to drive a car tuned by Oberhofer, Kinsley believes, will be a dream come true.

"We really wanted to go run good at our home track in Dallas, and we were to the point that we probably weren’t even going to run because we didn’t have a crew chief," admitted Kinsley. "I’m really stoked to have Jim O. on board. Being a part-time team, or as I say semi-pro team, it’s been tough to keep up with the other teams. I think having a different set of eyes on the car will be beneficial."

Oberhofer admits he hasn't had time to ponder his future whether he remains in drag racing for the long term.

"I love racing, and for me, it's a much-needed break ... it's not a bad thing, to be able to recharge your batteries," Oberhofer said. "I am excited about the next chapter in my life, wherever that may lead me. I would like to go back to Texas and spend time with my parents. Who knows? This has been a challenging year, and stuff like the track prep and changes within the sport. It's been a tough year and at times mentally draining. The most important thing to me now is just being happy."