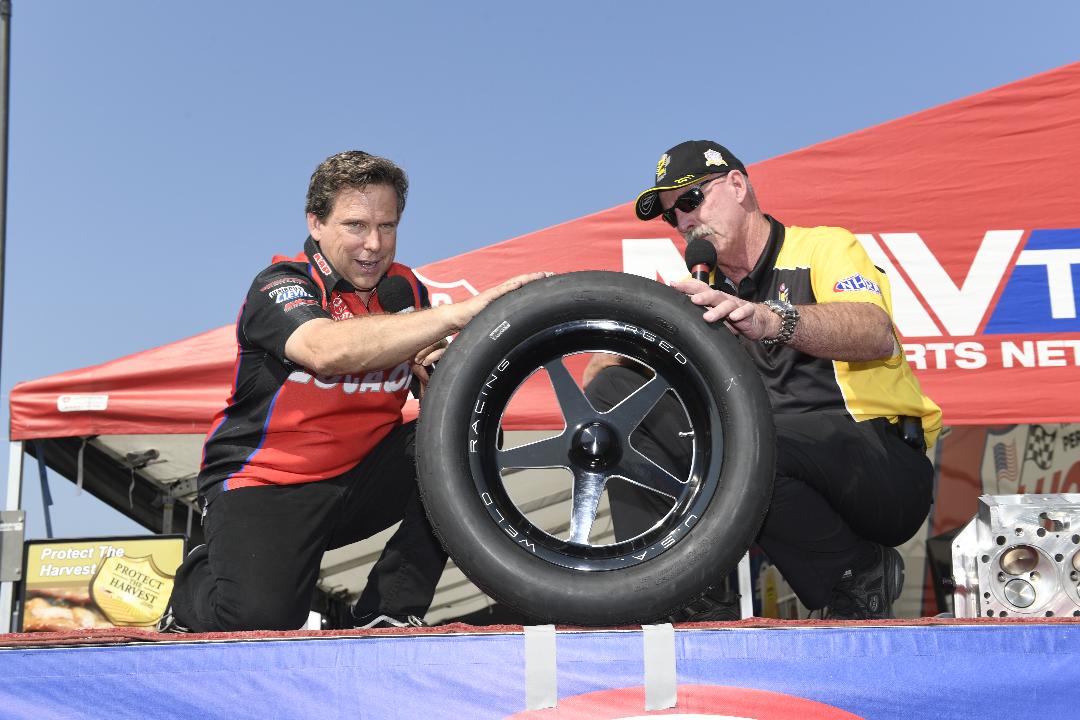 Shawn Langdon grew up in Mira Loma, Calif., and fabled Pomona Raceway was 20 minutes west of his home. So he and dad Chad made sure to be there every time the NHRA rolled into the Los Angeles County Fairplex. And one of young Langdon’s favorite drivers was Del Worsham.

Worsham was a hometown favorite. He grew up in Orange, Calif., with Pomona about 20 minutes east of his house. So their paths converged at the dragstrip, now called Auto Club Raceway at Pomona, where the Lucas Oil Winternationals will open the 2019 season next week.

Each went on to earn a Top Fuel championship for Alan Johnson Racing and then switch to driving a Funny Car for Kalitta Motorsports. In 2015, Worsham became only the third in the sport’s history to claim titles in both Top Fuel and Funny Car, joining Kenny Bernstein and Gary Scelzi. After Worsham claimed the 2011 Top Fuel championship for Alan Johnson Racing (AJR) and left the class, along with Larry Dixon, Langdon joined Dubai’s Khalid Al-Balooshi in replacing them. Dixon, Worsham, and Langdon gave AJR three Top Fuel titles in four years, from 2010-2013.

So their stories are interwoven. However, the one thing they haven’t done – but realistically could do in 2019 – is win a championship together. Kalitta Motorsports announced Tuesday that Worsham will be the crew chief for Langdon with the Global Electronic Technology Toyota Camry.

It isn’t Worsham’s first attempt at being a crew chief. He tuned Alexis de Joria’s Toyota at Kalitta Motorsports, has helped several other new professional drivers (including 2018 NHRA Rookie of the Year Bill Litton), and served as a consultant to reigning Funny Car king JR Todd late last season.

Because Don Schumacher Racing and John Force Racing have accounted for nearly half of the Funny Car field for about a decade, Kalitta Motorsports hasn’t had a reputation as a Funny Car powerhouse. But if the Langdon-Worsham tandem can deliver a third Funny Car series title in five years for the Ypsilanti, Mich.-based organization, that would change.

Todd earned the crown in 2018, driving the same DHL-sponsored Camry that carried Worsham to the 2015 championship – with Worsham in his corner during the Countdown playoffs. Todd, Langdon’s Funny Car teammate and “Nomex Effect” podcast co-host, shared what he had learned the year before when he made the transition from Top Fuel to Funny Car. And Todd scored a gritty triumph over equally gritty two-time champion Robert Hight on the final day of last season.

So for Langdon, the 2013 Top Fuel champion, the stakes are grand. He wants to see Todd and raise him. Langdon’s aim is to follow in Todd’s footsteps by seizing the Funny Car title in only his second year in the class but also to become the fourth double-nitro champion.

He’ll play his first hand at Pomona. It’s a favorite venue for Langdon. He swept both the Winternationals and the Finals there in the Top Fuel category in both 2013 and 2015. The second time, he recorded the achievement with two different teams, starting the year with AJR and finishing with DSR. The venue also was his home dragstrip when he earned the national Jr. Dragster championship at age 14 and back-to-back Super Comp titles in 2007 and 2008 – before he made his Top Fuel debut there in 2009 with Morgan Lucas Racing. (Lucas was Langdon’s classmate at Jurupa Valley High School.)

For the past two seasons, Worsham turned down lucrative offers to race once more with his father and longtime Funny Car partner, Chuck Worsham.

Arguably one of the most accomplished racers in NHRA history, Worsham ranks seventh on the all-time Funny Car victories list at 31, four behind Don Prudhomme (35) and one ahead of Kenny Bernstein (30). His stint in the Top Fuel class netted him eight victories and the 2011 championship.

Langdon advanced to five semifinal elimination rounds in his first season in a Funny Car.

The team is expected to participate in this weekend’s preseason testing opportunity at Wild Horse Pass Motorsports Park, at Chandler, Ariz., south of Phoenix.

Worsham will partner with Team Kalitta crew chief Nicky Boninfante on the Global Camry Funny Car. Boninfante was co-crew chief on Worsham’s Funny Car in 2015 when they won the championship.

“After spending the last two races of 2018 with the Global Electronic Technology team and working with Team Kalitta, it wasn’t a hard decision to make when the job offer was presented,” said Worsham. “Being a former Kalitta employee and champion, then watching J.R. Todd put the DHL Funny Car back into the championship for Team Kalitta, and adding the excitement and commitment of Steve and Samantha Bryson, I figured we couldn’t go wrong. Nicky (Boninfante) and I have worked magic together before and I would love nothing more than to bring that to the Global Funny Car. They have a championship-caliber driver in Shawn Langdon, the guys on the crew that have been part of our former championship team, a team owner that will give you every resource to succeed and a sponsor/friend who shares the same goals and enthusiasm. The Phoenix test session cannot get here fast enough along with the first race in Pomona for the start of the 2019 NHRA Mello Yello season.”

In addition to the Global Electronic Technology Funny Car team being set for the 2019 season opener at Auto Club Raceway at Pomona, California next week, the other Kalitta Motorsports teams have also finalized crew chief plans.

The 2019 NHRA Drag Racing 24-race season kicks off at the NHRA WinterNationals in Pomona on Feb. 8-10. Team Kalitta will also participate in a closed test session at Wild Horse Raceway in Phoenix, Arizona on Jan. 30-Feb. 2.