Danny Dunn wasn’t lukewarm about life. He was passionate about everything he chose to involve himself in as a builder, a dragstrip promoter, a Top Fuel competitor and a pilot.

Dunn, 67, died Wednesday night from injuries incurred following the crash of his light-sport plane. Dunn crashed into a heavily wooded area earlier in the day only a few hundred yards from his home and airstrip near Boone, N.C.

According to published reports, witnesses reported that Dunn had been flying his 2005-model Allegro LSA, a light, single-engine aircraft, for about 15-20 minutes when it crashed. A North Carolina State Highway Patrol trooper who responded to the crash scene told WSOC-TV that Dunn “crawled to get away from the scene from the fire.”

Dunn was airlifted to Wake Forest Baptist Medical Center in Winston-Salem with burns over 70 percent of his body. Hospital officials announced his death about 12 hours after the crash occurred.

“I knew (flying) was his passion other than racing,” said Mark Cox, a former Top Fuel Harley racer from Wilkesboro, N.C., where Dunn once owned and promoted the dragstrip. “He had these little ultra-light planes, and would fly those things all over Wilkes County. He loved it.”

The Federal Aviation Administration is investigating the crash. Dunn was the only person aboard the two-seater, which has a cruising speed of about 115 mph.

Dunn was a competitor in IHRA Top Fuel action in the late 1990s to mid 2000s after stepping up from the dragster he drove in its sportsman ranks.  At IHRA’s Mopar Parts World Nationals at Norwalk, Ohio, in 1999, he posted the quickest elapsed time of the event. Five years later, he was the runner-up to Clay Millican at Rockingham (N.C.) Dragway.

“I know that any time that that car showed up at the IHRA races … well, they didn’t run a lot of races, but it was always, ‘Aw, heck, we’ve got a car here that can really rip down the racetrack,’ “ said Millican, who captured the IHRA Top Fuel title from 2001-06. “He was a good racer, and in our book, that’s a pretty high compliment. They did a good job racing that car, and it was never an easy car to race against because it was fast.”

Millican’s crew chief then and now, Mike Kloeber, added, “They didn’t come to all the races, but when they came, they came to win.”

“He raced out of his back pocket and was never hesitant to go head to head with the top and well-financed” teams, Earwood said. “Danny was a cagey competitor on the starting line and in his performance. He truly was the last of the gunslingers who somehow held his own against the big guns.”

Millican said he admired Dunn’s ability to fully enjoy racing, even in the sport’s most expensive class.

“Out of the racecar, he was there to have a lot of fun,” Millican said. “He was always one of those guys joking around in the staging lanes. He didn’t have any pressure of worrying about points or any of that, he was just there to have a ton of fun driving his racecar. 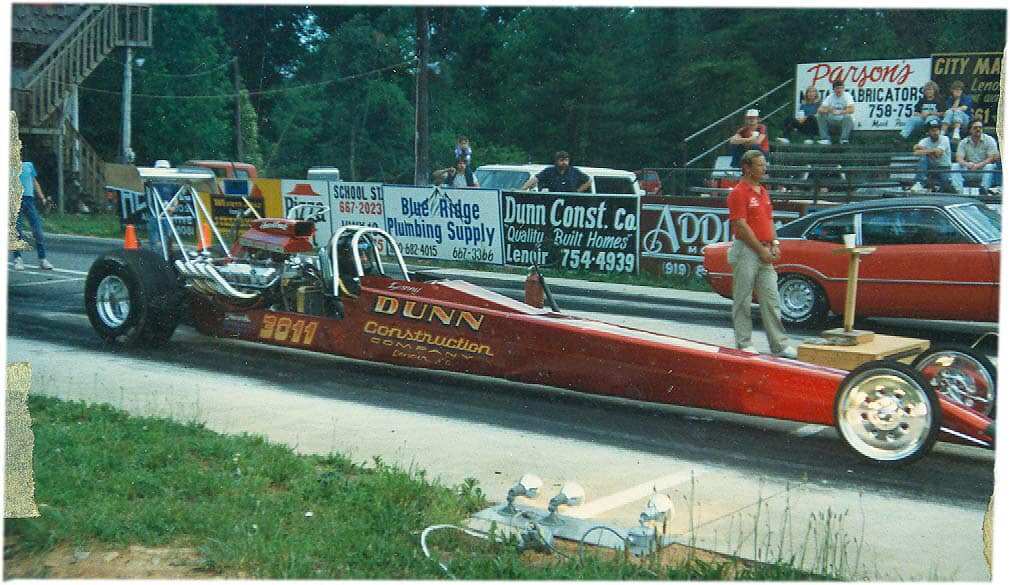 “The people around him working on the car, it was just a fun atmosphere around those guys. They weren’t worried about points or any of that. Even if they didn’t qualify -- and I don’t think that ever happened -- it wasn’t the end of the world. Me and Mike, that’s how we were paying our bills, and it was all about qualifying and making that money to go to the next race. Danny was there to have fun, but he was definitely all business when the helmet went on.”

Satch Gragg, a former IHRA division director, lived “about five minutes” away from Dunn when they resided in Lenoir, N.C. Gragg first met Dunn in the mid-1970s at the now-defunct Hudson Dragstrip, where Dunn campaigned an alcohol-burning roadster. Dunn owned a construction company and had several rental properties in Lenoir, Gragg said.

“He was very adventurous, he was courageous, he was full of himself, and he wasn’t afraid to try stuff,” Gragg said.

Once, Cox said, Dunn jumped in the driver’s seat of a nitro-burning, front-engine dragster at his track, Wilkesboro Raceway Park. “The most radical thing I’d ever seen in my life,” Cox added. “He was a fearless dude.”

On another occasion, Dunn talked his way into the seat of a Funny Car that wound up running off the end of the track.

“He ended up paying for that,” Gragg said. “It was someone else’s car, and it couldn’t be raced again, but he had it rebuilt.”

That's because Dunn found a use for the wrecked racer:  he had it mounted atop the pole that advertised Wilkesboro Raceway Park to travelers on U.S. 421.

Cox sold his Harley dealership in 2010 and now owns and operates Wildlife Unlimited, an outdoors store, in Boone. He said that Dunn dropped in the store within the past year and “we spent a lot of time catching up. He said he was enjoying life and flying his planes.”

Cox won an IHRA Nitro Harley race at Rockingham, and he finished third in the 2014 Nitro Jam points running a partial schedule. He said his dealership sponsored one of the lanes at Wilkesboro Raceway Park when Dunn owned it.

“He was passionate about drag racing, and we started partnering on motorcycling,” Cox said.  “He would have a test-and-tune on Thursday nights, and we’d have a little motorcycle competition among a lot of the guys that worked at my dealership and stuff like that.”

Dunn announced in 2014 that he was going to close the dragstrip. A local resident, Pat Prout (now Halbedel), offered to trade him her home in neighboring Watauga County for the track, and Dunn accepted.

It is that house in which Dunn was living at the time of his death. Located on a knoll about 10 miles north of Boone, the property features a driveway that is a quarter-mile long in addition to the airstrip from which he launched and landed his planes.

“He was very confident,” Gragg said. “He wasn’t afraid to take on anything.”

Funeral arrangements for Dunn have not been announced.