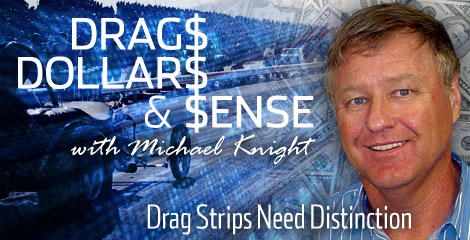 I just read Michael Knight’s commentary and I am somewhat confused. I understand that this is a commentary and it his just his thoughts but I do have some comments of my own. First and foremost, if Michael, or anyone for that matter can not see the difference between Pomona and Englishtown or even Maple Grove, they certainly do need glasses or at the very least, an eye exam. I don’t understand what he is talking about regarding the lack of track identity. There is no way for any casual fan or newcomers to any sport to pickup the identity of a venue from MLB to NHRA unless they become a fan of the sport and follow it for at least a few years.

Keeping the above in mind, here’s my rant. Isn’t it really about the actual racing or even more important, the actual identity of the racecars? This is one of many serious issues. We need new fans? Yes ... But how would you expect any newcomer to ID any fuel or alcohol car (This should includes Pro Mod) these days. I love this sport and have been following it and involved at times for over 40 yrs. I’ve witnessed the sport’s so-called “golden” years with fond memories but I can not foresee it going back to such popularity. I began to see the change begin back in the mid 80’s.

When I roll thru the gates of Island, Englishtown, Maple Grove or even ATCO, I can look around and remember the huge amount of spectators that used to attend a race even on a casual Sunday. No national event. Just folks cheering on a 13 second Jr. Stocker or a favorite Super Stock car. You’d wait in line at the snack bar or even at the rest room just as you do now at a national event. If FX racers, top fuel or later funny cars and pro stock racers were in town, you’d easily bet on a packed house!

In my honest opinion, this sport does not and has not produced any names that can be compared with Prudhomme, Garlits, Sox, Jenkins or any of the legendary drivers of that era. Sure, aside from John Force we have Schumacher, Capps, etc. but arguably they are not held to the same level as those of years gone by. The simple mention of those names during a radio ad did indeed pack the house. This leads to some thoughts of my own...

Maybe it’s the society we are currently in where drag racing simply does not “fit” in as it once did. High gas prices, econo-4 door clone-cars. The cars most younger folks are driving. How can they relate? It’s no wonder they’d rather go sit with a video game and race the cars WE ONCE DROVE AND RACED back in the day. The younger generation, most can’t even modify their own cars other than tires/wheels, tints and a sound system. Forget changing camshafts, installing a set of headers and a hot ignition set up. Most guys these days don’t even know how to change a tire! How would you sell drag racing to them? Hardcore fans? We are now in our 40’s, 50’s and 60’s and I don’t see new fans with this passion coming up anymore.

Another thought comes to mind that maybe it’s an immigration thing. Those who have come into this country during the past 25 years can’t relate or understand the “reason” or “purpose” of drag racing. Don’t laugh at this... I am not trying to be funny here nor do I discriminate but I’ve heard that hundreds of times! I speak from the east coast which has changed dramatically over the years. Try selling drag racing to the average European, Muslim or Indian person. I bet the house they’ll ask you what the point is. They don’t understand! Why? NHRA is not marketing correctly? Don’t know if they can these days. Maybe because there are too many other things to do? Don’t know.....I would say forget spending money to improve signage and venue identity problems because this sport has some major issues that must be addressed before they begin to look at changing the appearance of venues. Sorry for sounding so depressing but after reading columns like this, it makes me wonder where this sport is really heading! Blue dragstrips? Come on already! Rubber is black for God sake. - Al Arg


I disagree, there are many tracks that look different, Thunder Valley, Joliet, Indy, Vegas. Each has a uniqueness about them. Thunder Valley with the strip carved into the hillside. Joliet with the complete wraparound concept. Indy with the pedestrian bridge. Vegas with the "THE STRIP" sign. Z-max with 4 lanes!

However all facilities even the Bruton Smith tracks could use some polish. Top of the line glass towers for the sponsors and corporate events i.e. the Football/Baseball sky box concept. I do agree there could be some differentiation needed around the starting/tree area. Unique signage around the starting line tree area would work wonders! The NHRA should invest in multiple mobile big screens placed around the track. Unless you're at Friday night qualifying, you can barely see them in the sun. - Dave Jablonski

While the premise of correcting "sameness" at some drag racing venues may be good, and the suggestions by Paul Page have some merit, many of the proposals & comments by Knight left me shaking my head in disbelief.

For instance, why does he believe that tracks should cater to celebrities, the well heeled & the media even more than they already do? The paying fan is who pays the track's bills. Cater to them with clean facilities, comfortable and covered grandstands (that can be architecturally distinctive for that " TV eye candy"), reasonable ticket, parking & concession prices, and easier ingress & egress.

Incidentally. If Mr. Knight believes that Reading & Route 66 looks the same, and Parks Tower & the Footbridge at IRP (yes ... it will always be IRP) are indistinguishable from E-Town, he's not paying attention. And Wrigley Field? A wonderful place to look at on television, but in person a dump that's unfriendly to spectator and participant alike. - William Swanson

Columnist Knight is right on the money when he says NHRA tracks need to differentiate themselves from other venues. Celebrity viewing spots. Ring of LEDs. Red carpets for competitors. All great ideas. Let me add striking virtual signage. And a better way to showcase series sponsors than those awful ugly inflatable products that serve as backdrops to winner interviews.

The days of logo imagery forced into every frame are over. Now, marketers need creativity to give their series and team sponsorship "legs." Making more meaningful connections with fans through creativity and technology should be the first order of business for the NHRA and its sponsors. - Barry Bronson


Distinction, hmmm, let's see.  Tom Compton and his lame gurus don't have a clue about being creative or it would have happened.  As far as karaoke is concerned I think that Mr. Knight should be drug tested.  Now, back to distinction. Pomona; there is not a track like Pomona, short runoff, the hills at the end and mountains behind the starting line. Yes Denver is unique as well as Indy, but Seattle is phenomenal, with the trees and all, maybe he hasn't been there. Sonoma, Napa Valley. Brainerd, the lakes. Norwalk, the show. Maple Grove, the Penn hills and Amish. Need I go on, and I ain't even been to most.  But distinction they all have.  Yes, maybe some are boring to look at, like Houston and Topeka, but even they have distinction. How about Famoso, blooms in the spring smelling heavenly. Or maybe Eddyville, the most functional eighth mile there is. How about the old Green Valley and Bowling Green, now there is distinction. Or maybe Jackson County Sports Park near Medford, Oregon, with its up hill shut off that is beautiful.  I could go on and on, maybe Michael hasn't experienced enough tracks to talk.  They all have their own personality.  I've been to many and just wish I could drive at many or at least go like ya'll do every weekend, track to track and maybe being SOOOO busy that you can't appreciate all the distinction of every track.  God Bless, wish I was doing what ya'll have the opportunity to do, but I would give all, just to drive nitro. - Mark Elms


Since all of us, drivers, crews, spectators and the media who love our magnificent drag racing and want it to grow and be appreciated.  We strive all the time to play Paul Revere and get the word out that this is an incredibly wonderful experience to be at the starting line and experience a two fuel car burnout and launch.

Being a Red Sox fan and certainly appreciating the wonders of Fenway, makes me really appreciate your article about what we need to do to make our tracks stand out and have their own looks and personalities.

My home track, New England Dragway is going to have it's own opportunity to make a national first impression in 2012 as a Full Throttle event hosting track and it's a great track in many ways, but certainly not pretty, unique or interesting in any way.

Anything I can do to help grow our sport here in New England, please feel free to ask at anytime. - Dan Costin