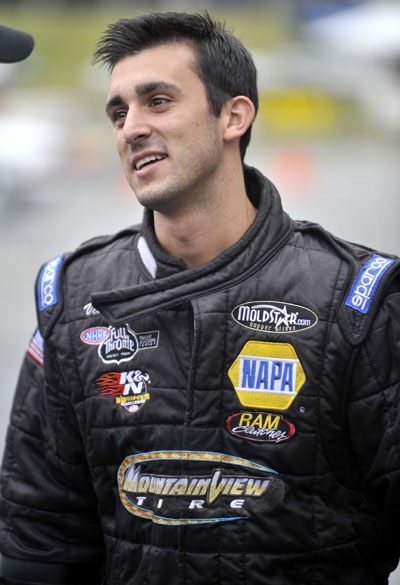 You didn’t think Vincent Nobile was just going to leave drag racing behind when his Pro Stock gig went away, did you?

After two years on the sidelines, he’s ready for a comeback, though in a capacity that comes with a lower profile.

Nobile will return to action at some point in 2021 with a Kasey Lane Race Cars dragster and a 598-inch, naturally aspirated powerplant between the frame rails. As for a schedule, well, he’ll see you when he sees you.

“I’m just tired of sitting home doing nothing, is basically the whole thing,” he added. “I want to just go have a little bit of fun and figure out a million other ways to lose.”

Not that Nobile was looking to leave Pro Stock racing at the end of 2018, but at least he went out on a high note when Mountain View Racing owner Nick Mitsos decided to abandon the class. Nobile was sixth in the final points, with victories over Deric Kramer, eventual champion Tanner Gray and Drew Skillman at Las Vegas, Atlanta and Reading, respectively.

Nobile had driven Mitsos’ car since 2011, when he won thrice, and would pilot it to victories from coast to coast in 25 final-round appearances over eight seasons. The 2012 campaign was their peak in terms of year-long performance as Nobile finished a career-best third in the standings.

“I was just a driver at the time, so that was it for me,” Nobile said of Mitsos’ decision. “All I did was really race the car for them, so I didn’t really have much say.”

It appeared he would be back in the Pro Stock ranks in 2020 as a member of a two-car Mountain Motor Pro Stock team envisioned by Roy Hill. That concept didn’t come to fruition.

“That whole deal was up in the air. Roy wasn’t really sure what his plan was,” Nobile said. “We didn’t really plan 100 percent on racing the two cars, it was all kind of ‘let’s see how it goes’ -- one of those kind of deals. NHRA was all up in the air with that deal. Nobody knew what was going on as far as how many races there would be and all of that kind of stuff.”

Going Pro Stock racing -- in 500 cubic-inch NHRA style or the mountain-motor version -- on his own wasn’t an option, he said.

“It’s out of my budget. To be completely honest, I’m not very good … if I can’t afford to do it myself, I kind of stay away from doing it because I’m not good for asking for money or asking for help,” he said. “I try and make more money myself so I can go have fun on my own.”

“I can’t afford to race Pro Stock, but I love Pro Stock. This whole bracket racing deal is as competitive, if not more competitive, than Pro Stock is, especially from a driving standpoint. That’s kind of what enticed me to want to do it. I’ve always been intrigued by it. I’ve never really bracket raced much, but the little bit that I have done, I have had fun.”

Being out of a ride after having raced professionally for eight seasons was difficult, Nobile said. It wasn’t easy to make a lifestyle change almost overnight.

“I can honestly say the first year I sat home was definitely mentally tough because it was something I did for eight straight years,” he said. “It just became muscle memory. We come home, I go to work, I get everything I have to get done, and I hop on an airplane to go to the next race. It was a change; from doing something the same every week for eight years to stopping it completely, abruptly. It was definitely tough.

“I miss the racing as a whole. It becomes a part of you. I’ve been doing it with my dad since diapers; been at the track my entire life. It was inevitable, it was just a matter of time that I’d be back out there when I made enough money that I could do it on my own and not need anybody else.”

The son of 2004 IHRA Pro Stock champion John Nobile, Vincent and his father have several business endeavors on Long Island, N.Y., to help fund the new bracket program. They have a trucking business, “a little distribution company” and a small hand in “flipping” houses, Vincent said.

“Whatever can turn a few bucks for us,” he added.

Brian Self, Nobile’s Pro Stock crew chief in 2018, is teaming with his son Bryce, and with Casey Gardner, to build the engine. As winter turns to spring, Nobile hopes to have all the pieces together to go testing, followed by entries into bracket events, as well as NHRA divisional and national races in the Super Comp ranks.

“I don’t know if I can quite do it,” he said of becoming an elite bracket competitor. “I know I can at least get from the starting line to the finish line. Whether or not I turn the win light on, that’s a different story. … Racing’s been in my blood since I was a baby, I just need to be back out there at the track. I figure this is something I can afford to do, something that looks like fun, and, hey, if you get lucky, what’s better than coming home with a $500,000 check?”