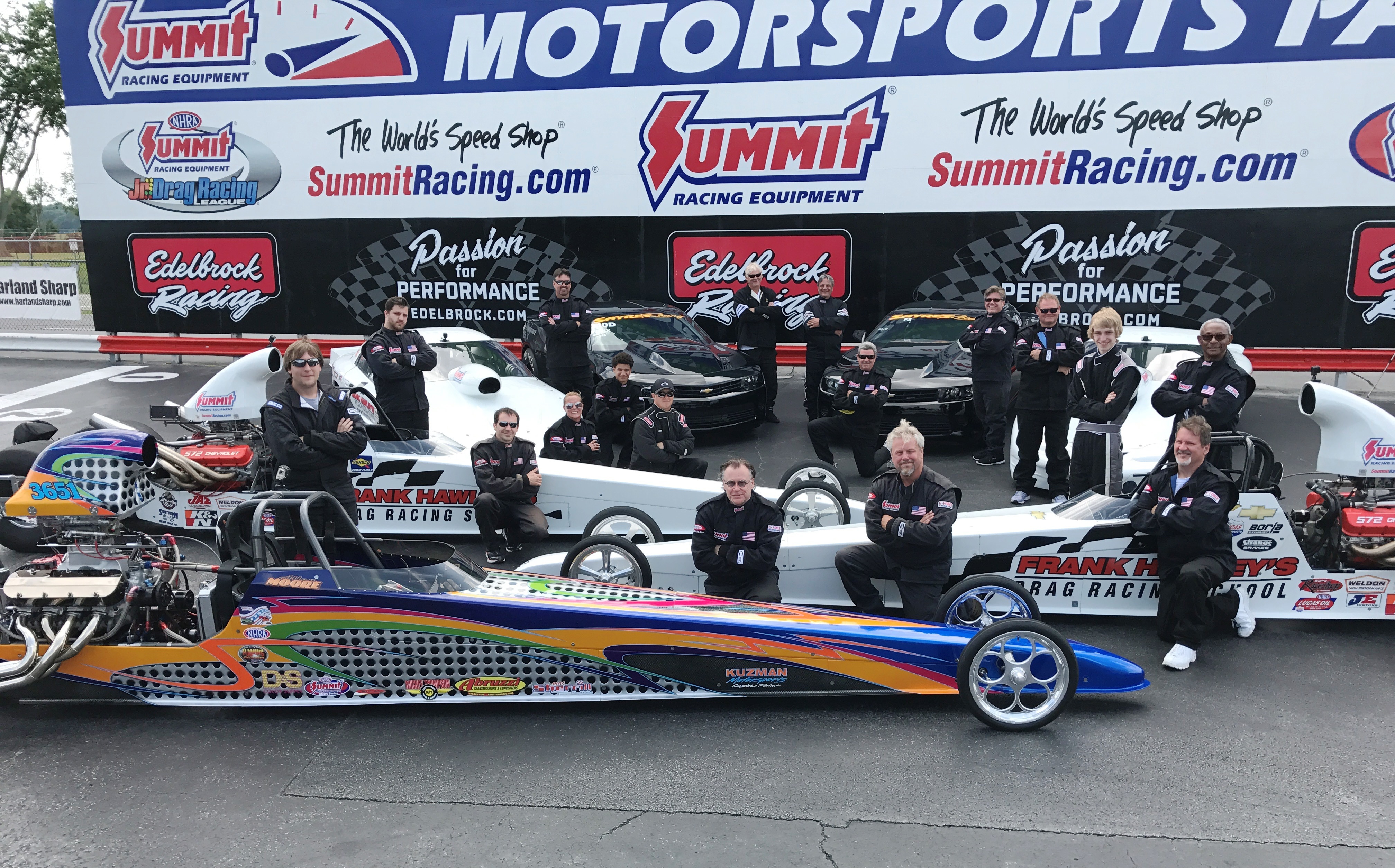 For almost forty years, Frank Hawley’s Drag Racing School has been the primary leader in racing instruction and entertainment for aspiring professionals, thrill-seeking enthusiasts, and everyone in between. Summit Racing Equipment has been involved with the School since 2004 and, thanks to Summit’s support of sportsman-level racing, Frank Hawley’s has been able to make drag racing dreams come true for tens of thousands of speed students.

Similarly, Summit Racing Equipment has provided outstanding customer service since 1968. The company first partnered with Frank Hawley’s Drag Racing School nearly two decades ago as a way to continue its support of the enthusiast and racing communities.

“We value what Frank [Hawley] and his team are doing by helping folks learn to race or take the next step to go faster in their careers. For some, it’s a bucket list-type item, but for everyone, they’re fulfilling dreams,” said Jim Greenleaf, Motorsports and Events Manager at Summit Racing Equipment and an employee of the company for 25 years. “Frank is improving drag racing, and we are proud to be a part of that by supporting the school as well as its students and racers.”

Instilling confidence and developing competence are core focuses of the School, as its curriculums are geared towards developing the next generation of drag racers. Summit Racing Equipment supports these same goals by offering a discount on its products to all of Hawley’s graduates, and also by endowing the School with fire jackets and pants, as well as other safety equipment and items that attendees may need. 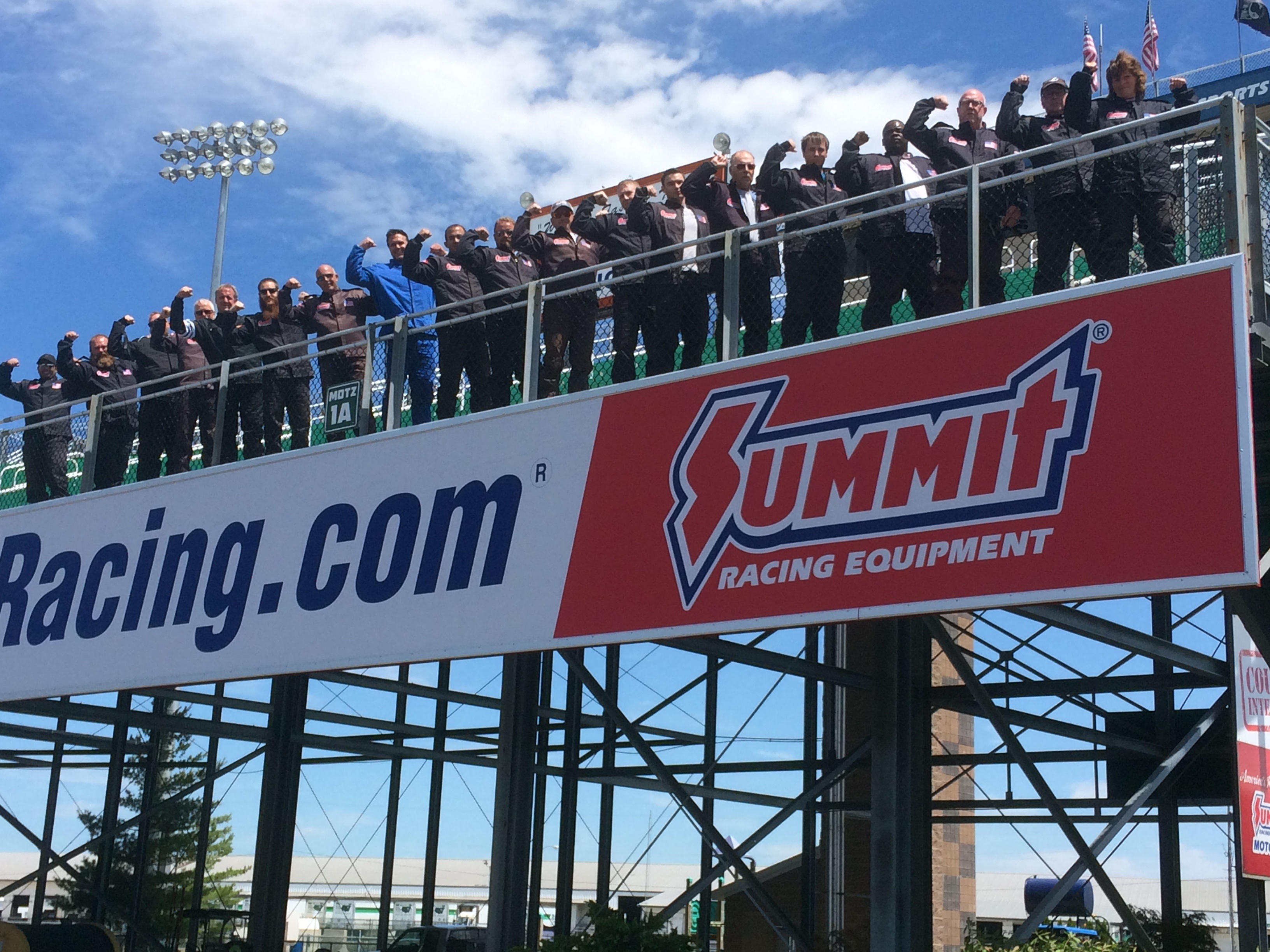 “Working with Summit over the years has been wonderful,” said Hawley, who trusts Summit as the School’s “go-to” source for almost everything needed to operate its programs and keep its race cars running perfectly. “Summit’s folks understand the needs of the customer better than anyone.”

The relationship has been such a successful one, in fact, that Summit plans to continue to work with Frank Hawley’s Drag Racing School in the years to come. “Frank’s a great representative for Summit, and for drag racing,” said Greenleaf of the School’s founder, two-time NHRA Funny Car World Champion Frank Hawley. “We love giving back to racers through contingencies or however else we can, and Frank’s School is a big piece of that puzzle.”

Summit Racing Equipment has a longstanding history of supporting drag racers at both the national and sportsman levels. “We’re going on roughly twenty years with the IHRA Summit SuperSeries and we’ve got the NHRA Summit Racing Series for bracket racers,” Greenleaf said of just two of the many programs the company offers. Summit also sponsors the Summit Racing Equipment NHRA Nationals, held annually at the iconic Summit Motorsports Park in Norwalk, Ohio. “We love giving racers a chance to race at their local tracks and go on to compete at a divisional level, and even to advance to the national stage where they can be crowned a champion all based on them having started locally.”

Whether it’s a lifelong racer finally succeeding in their goal of winning big, or a rookie whose natural talent takes them to the next level, or a husband-and-wife team competing together at something they both love, the stories that arise as a result of racing are what motivate the Summit team to not only continue their support, but to also expand it through new initiatives.

Ultimately, Summit Racing Equipment isn’t just a supplier of performance parts – it’s a supplier of the parts and pieces needed to turn dreams into reality, and Frank Hawley’s Drag Racing School is proud to be partnered in making that happen. For those looking to enjoy the ultimate driving experience, Frank Hawley’s Drag Racing School is the most respected and most visited of its kind in the world.