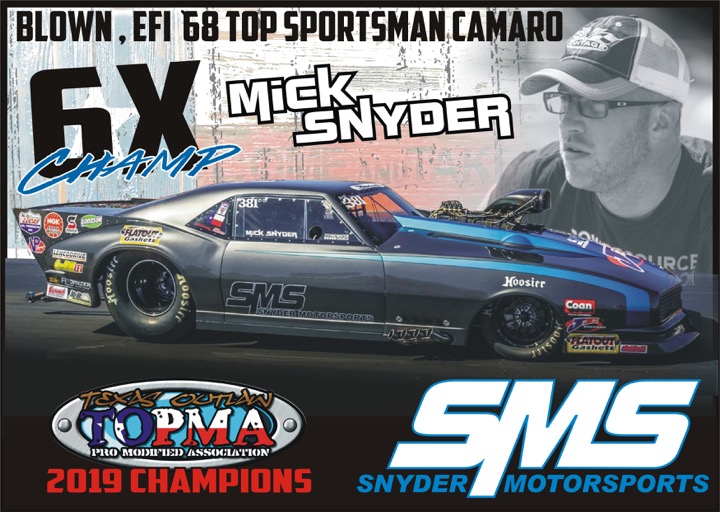 Any way you slice it, second-generation drag racer Mick Snyder experienced a tremendous season. He added his sixth career series championship, winning the Texas Outlaw Pro Modified crown. The championship was the seventh overall for Snyder Motorsports, which has won in four different organizations and five different classes with dragsters, funny cars, and door cars.

Despite traveling 7,822 miles, and at times racing in an adjusted altitude of 9.079 feet above sea level, Snyder made the most of the 13 events he competed in at eight different tracks. He certainly made the most of his 63 passes.

These passes resulted in four final rounds and seven No. 1 qualifiers.

“This was the first full season for Snyder Motorsports in Texas and a first full season with our new-to-us 1968 Blown, Electronic Fuel Injected Camaro, so we approached the year with a plan to hit a lot of different series and events,” said Snyder. “We never planned on competing for a championship, but it’s always nice to get one at the end of the season to validate all the hard work and effort.

“We spent the year at the track testing new products, trying new ideas, promoting our sponsors, and supporting our customers. Our SMS Camaro is a banner for everything we sell, so to take a TOPMA championship and finish in 4th in Top Sportsman with the Midwest Pro Mod Series is very rewarding.

“Our little racing family of five had a great time this season. My wife, Lindsey, had her first year as crew chief. She has more steps in a day than I get the whole weekend driving. Our three kids are getting older and are helping more now than they know at the track. We were able to race as a family at the World Series of Pro Mod in Denver, a Pro Mod versus Fuel Altered race at Northstar Dragway, compete in our first and second Throwdown in T-Town, run with the MidWest Pro Mod Series at the NHRA Fall Nationals and attend over half a dozen races at Xtreme Raceway Park, which has turned into our home track and the SMS Test Track.

“I feel very blessed to be racing and winning as a family. I also can’t thank Marty Robertson enough for what he does to support our team. We couldn’t do this without him.”

This classic video, produced in the early 1970s. explains the value of drag racing in the entertainment community. Plenty of old cars and interesting people in the promotional/documentary sport extolling the virtues of straight-line racing. - https://t.co/JWen3FleCM pic.twitter.com/8dfLpjs1vw