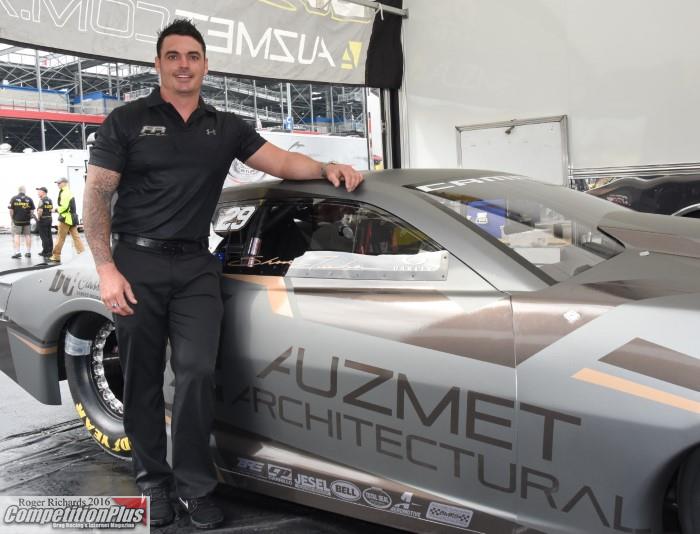 The NHRA Pro Stock journey has been a long and winding road for Shane Tucker.

Since 2014, Australian businessman Tucker has competed on a limited NHRA Pro Stock schedule.

That, however, is going to change in a big way in 2019 as Rob Tucker Racing for the first time will run a full NHRA Mell Yello Series schedule, which was reduced from 24 events to 18 events in Pro Stock beginning next season. Rob Tucker is Shane’s father and the family’s team is based in Statesville, N.C.

The Tucker family’s foray into full-time Pro Stock was a result of joining up with renowned engine supplier and consultant Nick Ferri.

“Being that I was only a part-time, half a season sort of guy it was fairly attractive to me when the 18-race schedule was released, because 18 races is certainly something that is feasible for us rather than the 24 races,” Tucker said. “It’s a dream for us to get to run for a world championship. To do that you have to have a good plan and people in place and we have partnered with Nick Ferri Racing and his resume speaks for itself.”

Nick Ferri Racing will supply engines and consult with Tucker and his team on the set-up.  In the past, Ferri worked with Jegs, Cagnazzi Racing, Mike Edwards Motorsports and most recently Elite Performance for a combined 5 world championships in Pro Stock.

Tucker will be piloting a Pro Stock Chevrolet Camaro sponsored by his business Auzmet/Structglass, and he is building his aarchitectural business in the United States.

A year ago, Tucker is made his season debut at the U.S. Nationals at Lucas Oil Raceway in Indianapolis (Aug. 31-Sept. 3). He competed in only two other events in Dallas and Charlotte, N.C., with not much success.

“We’re going to do some testing in January probably in Phoenix and our expectations we have to keep fairly honest because we didn’t qualify too well last year,” Tucker said. “We want to qualify and then qualify well and then take it race-by-race and hopefully are ambitions will change a little bit.”

“Everywhere Nick Ferri has been he has been successful, and he has a first-place class operation,” Tucker said. “I met all his guys and we’re on the same page. We want to go race and we want to have fun while we do it. I’ve known Nick for a long time, you’re talking 10 years. I used to be a development driver for Cagnazzi back in 2008 and Nick was building motors for Cagnazzin at the time. When I was leasing motors from Elite, Nick was doing motors there and this makes since to join Nick now.”

Tucker acknowledged there were times when he felt racing full time in NHRA wasn’t going to be a possibility.

“There were many times I thought maybe not (to racing full time),” he said. “I guess I’ve always been a believer of pushing the bar to the limit and hopefully one day you can reach the bar and jump over it. I’m excited to have an opportunity like this and work with these guys who have the same goal as us. There’s no secret we want to go out there and win a world championship. We wouldn’t be rolling in the gate without that goal, but we are mindful that it is a tough road to get there. We might not be at the top of the pack in Pomona, but I guarantee at sometime through the year we are going to make up some ground.”