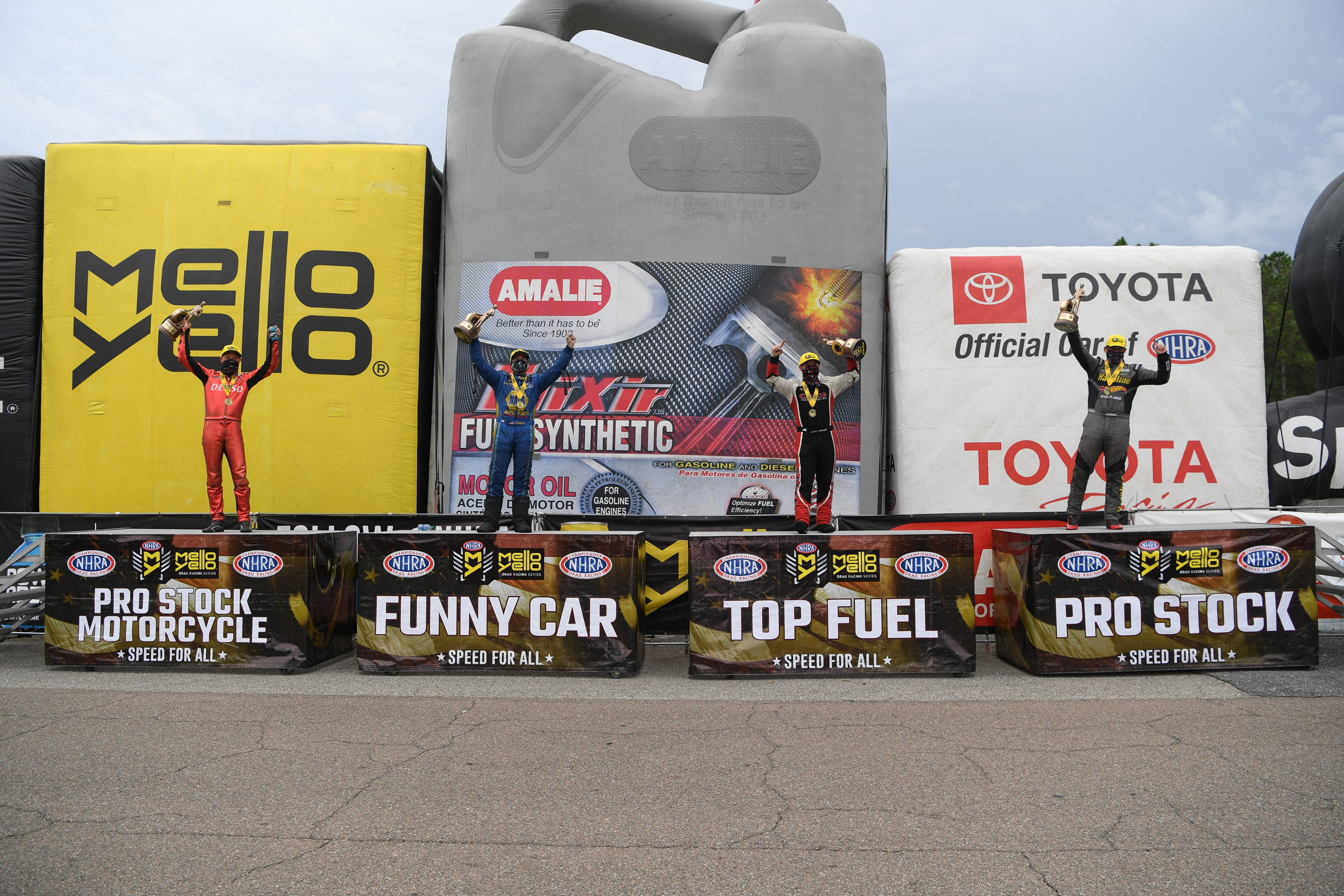 Defending Top Fuel world champion Steve Torrence vaulted into the points lead on Sunday at Gainesville Raceway, powering past his father, Billy, in the final round to win the AMALIE Motor Oil Gatornationals for the first time in his career. 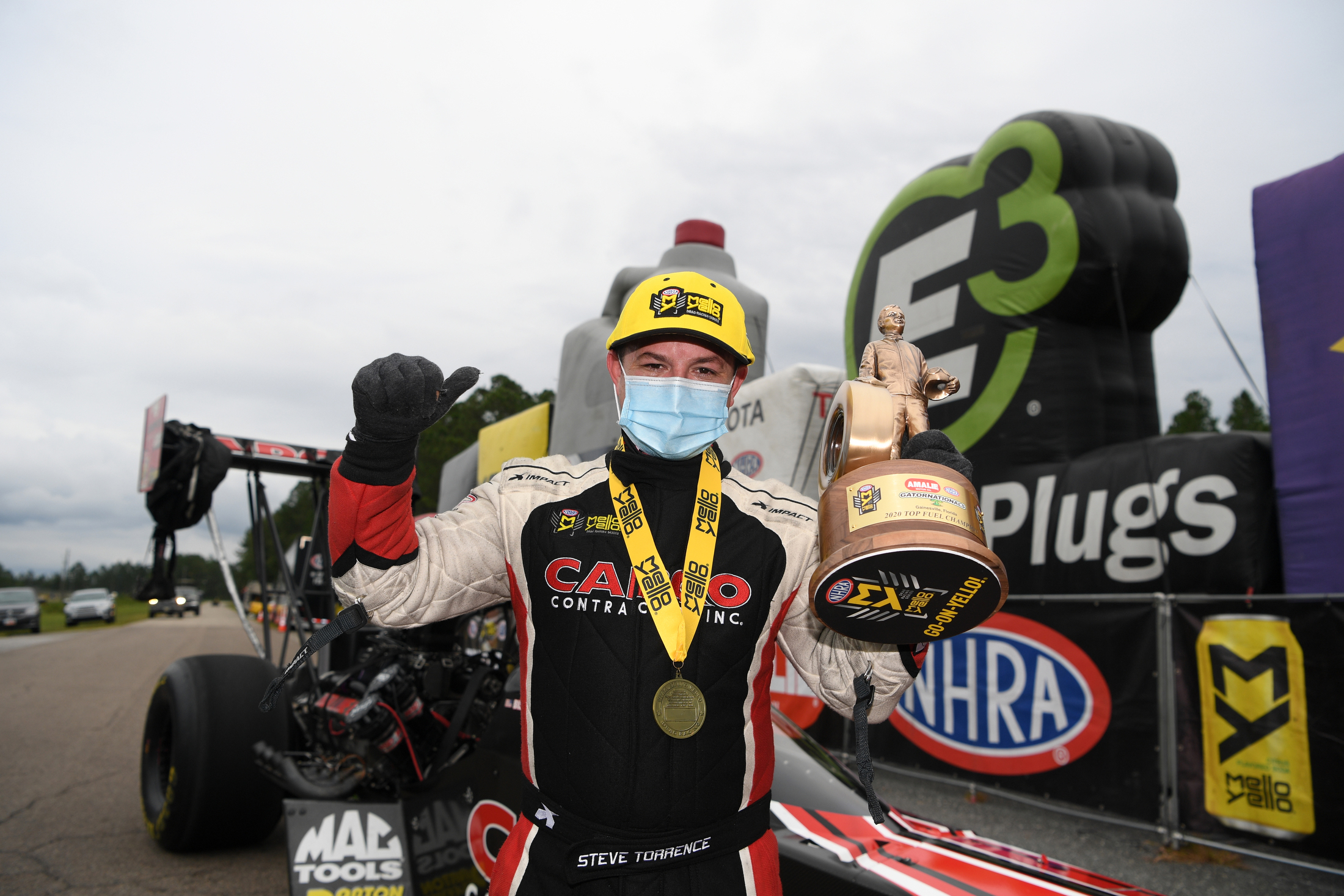 Torrence, who has won back-to-back world titles, went 3.809-seconds at 322.11 mph in the final round in his 11,000-horsepower dragster, which paid special tribute to “Big Daddy” Don Garlits’ iconic “Swamp Rat 14.” With Garlits watching on the starting line, Torrence and his throwback look slipped past his father’s 3.810 at 320.74 to win for the third time this year and 39th time overall. Torrence, who beat Tony Schumacher, Doug Foley and Leah Pruett to reach the final round in Gainesville for the first time, also moved into first in the class by 22 points over Doug Kalitta to cap off a memorable weekend.

“To come out here and have the opportunity to run the ‘Swamp Rat 14’ and have (Garlits) here with us, it’s icing on the cake for anything you want to do,” Torrence said. “We’ve got some good momentum and to be in the points lead, that’s just a testament to how hard Richard Hogan, Bobby Lagana and every one of these Capco boys work. For my dad to go to the final round, both of us are doing well. We’ve just to stay focused and concentrate on what the task at hand is, and that’s trying to win a championship. These guys give me an unbelievable race car and you just try not to screw it up.”

Billy Torrence reached his second final round this season and ninth in his career with victories against Todd Paton, Shawn Langdon and Terry McMillen. 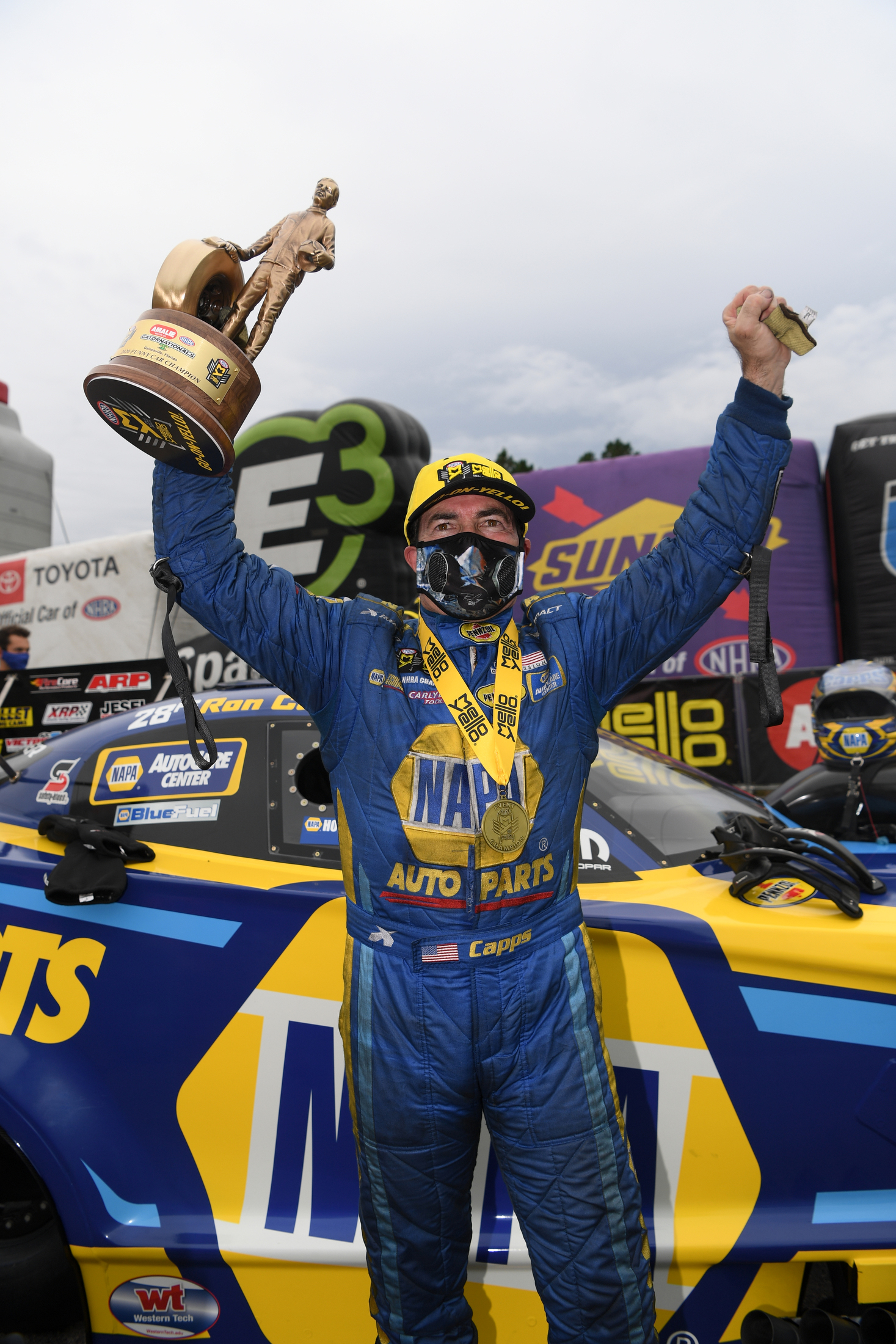 Capps picked up his fourth career win at Gainesville with a clutch performance, running 3.937 at 323.12 in the final round in his 11,000-horsepower NAPA Auto Parts Dodge Charger SRT Hellcat to squeak past Tim Wilkerson’s 3.945 at 325.92. It gave Don Schumacher Racing its 10th straight Funny Car win and came in a backup car after an explosion during Capps’ semifinal victory against teammate Matt Hagan. The team, led by crew chief Rahn Tobler, got the new car ready quickly, and Capps, who also had round wins against John Smith and Alexis DeJoria, delivered his second win in 2020 and 66th in his standout career.

“To be able to win four (Gatornationals) is pretty wild,” Capps said. “We put a spare car together that went out on its first full run and went 3.93 and won the Gatornationals. To run that well and have it be in the final round of the Gatornationals, it’s unbelievable. Rahn had it perfect and I felt pretty good about it. The best part is keeping the streak alive for Don Schumacher Racing. The guys on this team bring out on the best in me, and those semifinals were a big round. We had to make points up and we came through.”

Wilkerson reached his first final round this season and 45th in his career after beating Terry Haddock, Tommy Johnson Jr. and Bob Tasca III. Jack Beckman maintains a four-point lead over Hagan. 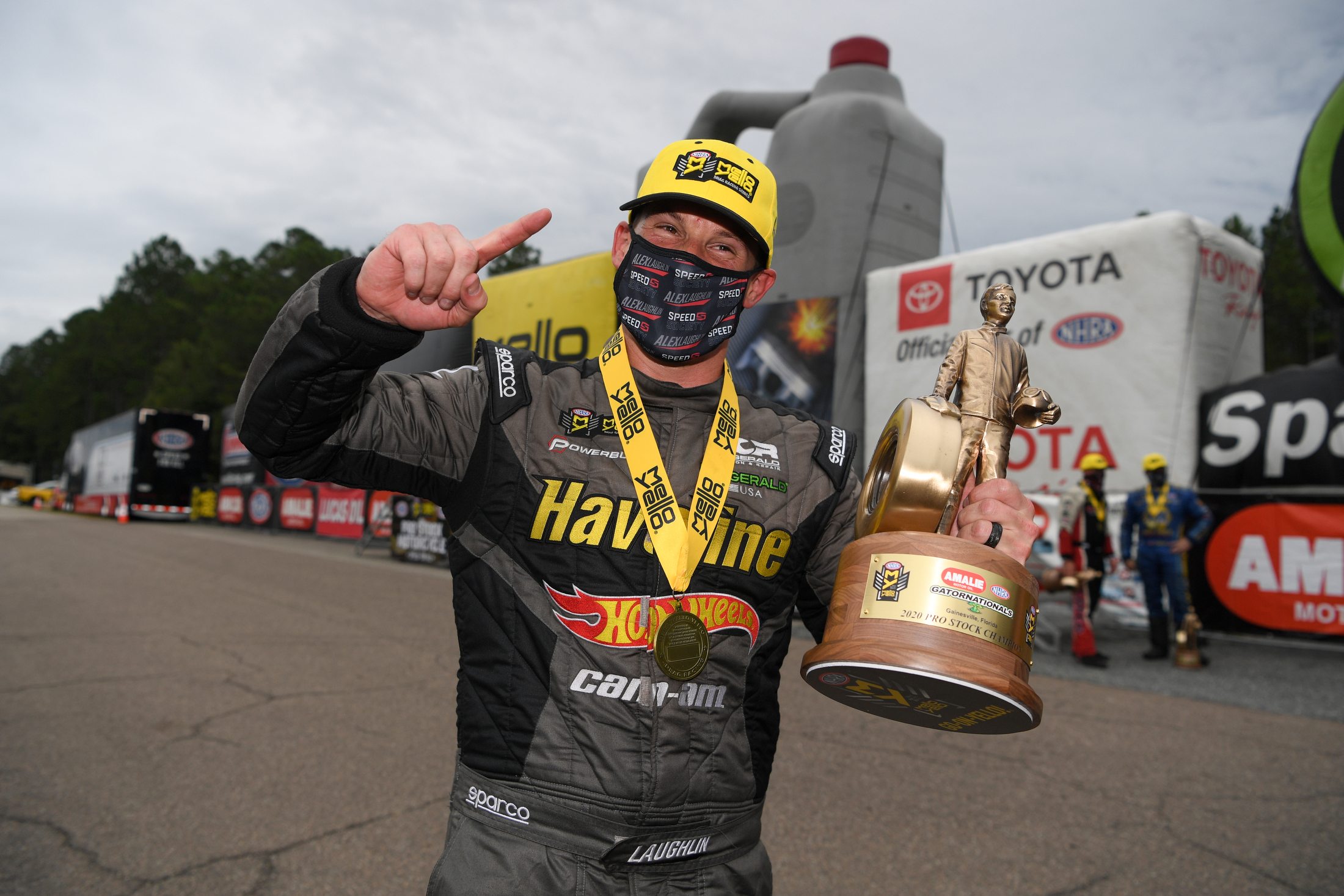 Pro Stock’s Laughlin turned around his 2020 season in a major way, racing to his first victory of the year in his Havoline/Laughlin Motorsports Chevrolet Camaro with a run of 7.068 at 204.76 in the final round against Aaron Stanfield. It was Laughlin’s first final round of the season and also made up for his crushing loss in the final round at Gainesville a year ago. He beat Kenny Delco, Kyle Koretsky and No. 1 qualifier Deric Kramer to reach the championship round before cruising to his fourth career win.

“After the first qualifier, I thought we were going to win the race this weekend,” Laughlin said. “This track has always been really good to me. I was amped (in the finals) and I just went nuts when I saw the win light come on. What a weekend. More than anything, I just needed that this year with how awful a year it’s been. We had a completely brand new crew this weekend and we were just trying to find a routine. Everything just paid off.”

Stanfield reached his first career final round in Pro Stock thanks to wins against Bo Butner, Cristian Cuadra and Jason Line. In the points race, Line jumped two points ahead of Erica Enders. 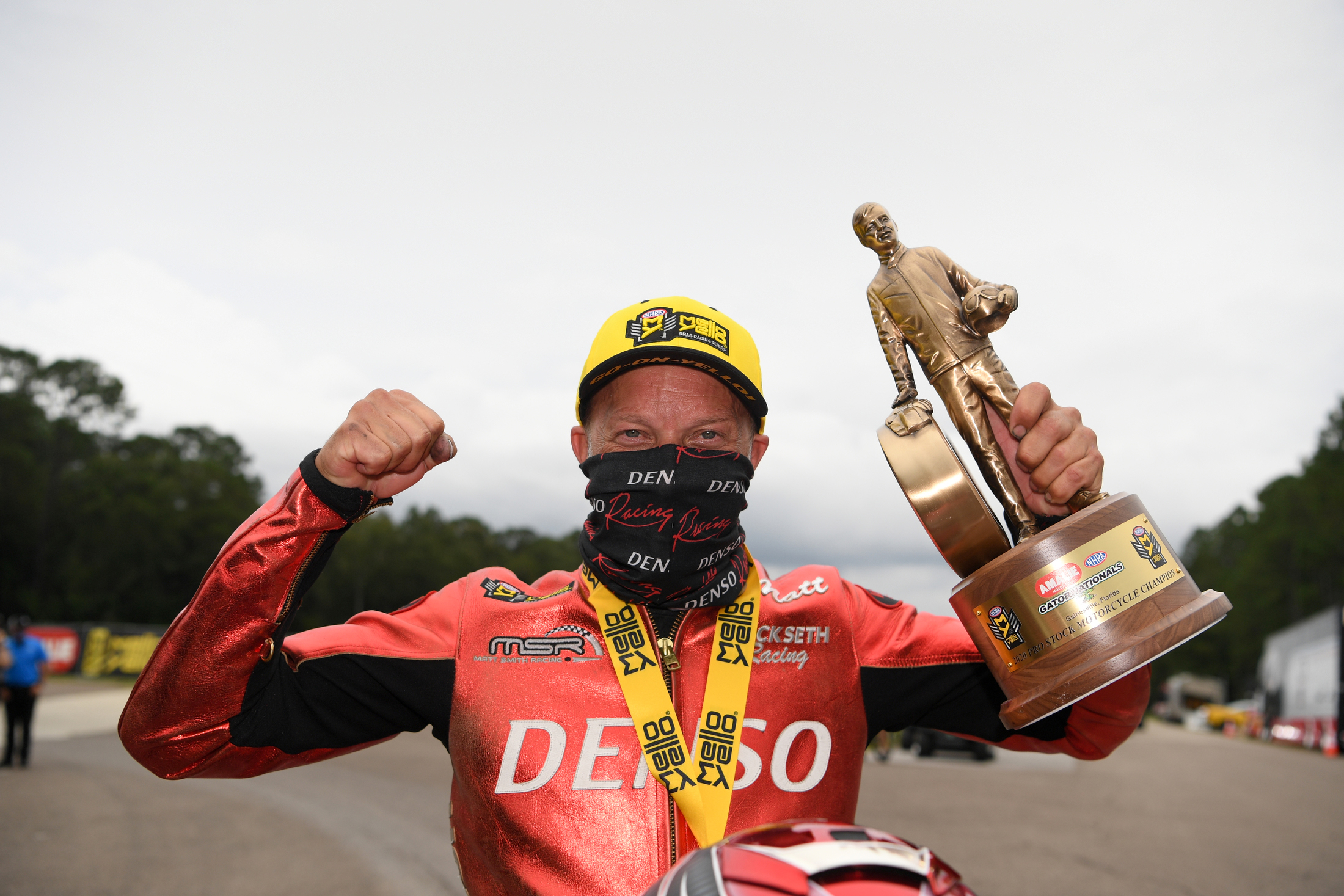 In Pro Stock Motorcycle, Matt Smith finished off a dominant weekend with his first win of the season on his Denso/Stockseth/MSR EBR, going 6.843 at 196.99 to beat defending world champ Andrew Hines in the final round. It also gives Smith, who was the No. 1 qualifier, his 25th career victory, continuing a stretch that also saw him win the Mickey Thompson Pro Bike Battle at the most recent race. He knocked off Kelly Clontz, John Hall and Scotty Pollacheck to reach the final round before his wire-to-wire win against Hines. Smith moved into the points lead with his first win at Gainesville, celebrating a special weekend that also saw his dad, Rickie, win in Pro Mod.

“I’ve tried since 2006 to win this race and I've never been able to do it,” said Smith, a three-time world champ. “I’ve watched my dad do it a couple times and it means a lot to win it. I’ve always wanted to win Gainesville and leave with the points lead, and I was able to do it. Right now, I think Team MSR has the best team out here and we have the power to win this thing. We’ve just to keep everything together, but we have the power to win races and win a championship.”

Hines reached his 98th final round with victories against Hector Arana Jr., and teammates Eddie Krawiec and Angelle Sampey.