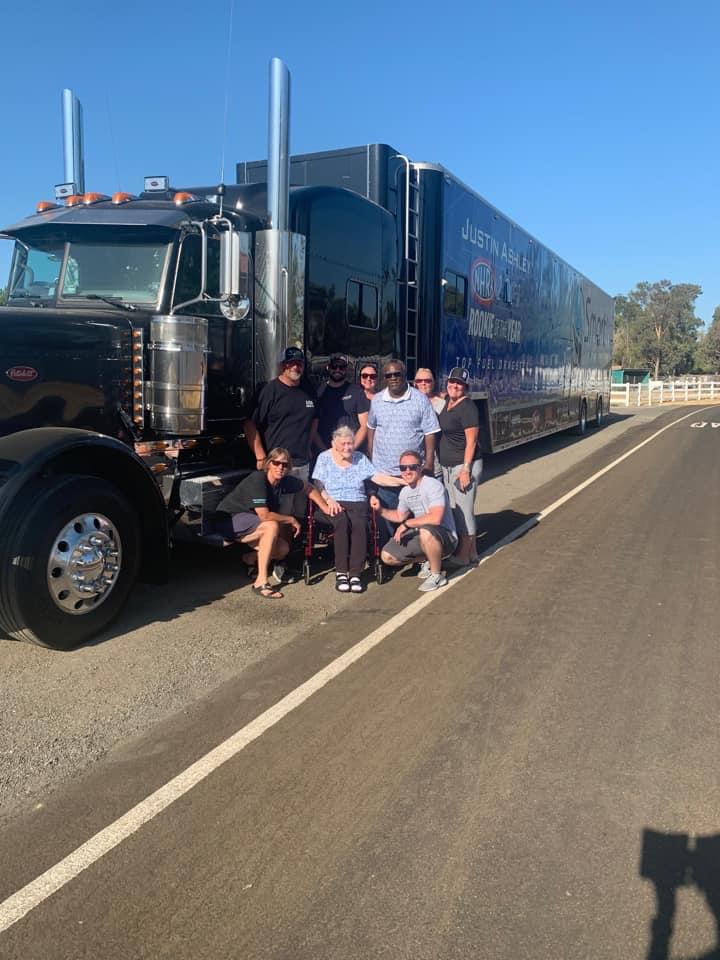 Justin Ashley held an important role on Monday afternoon as his team rolled out of Sonoma Raceway headed south to Pomona, Ca, for the next and final stop on NHRA's Western Swing. The Rookie of the Year Top Fuel driver had one job in the team's rig pulling the hauler - don't play any sucky music.

Ashley made sure Careless Whisper by Wham didn't play, nor was there any Rick Astley.

"We did some Tupac, some Biggie, and then we mixed in some country on the way too," Ashley said with a sense of pride.

The Smart Sanitizer/Strutmasters.com sponsored driver proudly has stepped aside from his busy schedule of working in real estate for a week on the road with his crew for crucial bonding time.

"When it comes to this kind of stuff, I'm completely unfamiliar with it," Ashley admitted. "Where I grew up, trucking and racing was not a part of everyday life. We have a few racers from Long Island, but other than that, no one really knows too much about it, unfortunately. So it's not something that I've been able to experience. So I thought it was important to take advantage of this. And I'm totally green when it comes to this, but I'm all ears. I think that the more I know the better, so I was definitely open to learning, and in only a few short hours, I learned a lot. I want to do it again."

Maybe the eagerness to partake in another road trip is because his crew took it a bit easy on him in terms of good-natured pranks.

"They didn't send me into the truck stop looking for blinker fluid," Ashley said. "I wouldn't have been surprised if they did try to get me with that. I did have some dirty responsibilities where I had to drain the tank, if you get what I'm saying,which wasn't the most pleasant experience, but that was my initiation into trucking. And now, I'll make it a point to do a few road trips a year if I can."

As Ashley sees it, the experience was priceless.

"Normally, I would fly back home for work and then fly back a few days later for the race at Pomona, but I felt like this was too good of an opportunity for me to pass up," he said. "I have my laptop, so I can work from here, but I really wanted to try and spend some quality time with the team and be part of that was going in the transporter, going on in the rig. We had a lot of fun and a lot of laughs. And I think it was important for me to see the other side of racing, all the important stuff that really goes into it."

Of all the accomplishments he pulled off during the week, passing the first test was the best.

"Thankfully, I have a nice team, and when I came out of Love's Truck Stop, they hadn't left me behind," Ashley said. "I'll admit, I was a little worried. I wanted to be sure that they would still be there, and they were, which was a positive step in the right direction.

"It was fun to see the other truckers on the road and see other people on the road. And it was a little funny watching people look at the back of the hauler and see my face and then look in the hauler to see if I was there, and this time I was."

Ashley has mastered several disciplines of dragster racing en route to the top of the drag racing food chain, but when it comes to driving the Davis Motorsports rig as Austin Arnridge does, he knows his limitations.

"A totally different skill set," Ashley said. "It's difficult with all the different gears and all the shifting that goes on and the footwork, to be honest, that it takes, but you really can't get a real appreciation until you get in there and drive. I'm probably pretty convinced that it's harder than driving a top fuel dragster at this point because it takes a lot of coordination.".