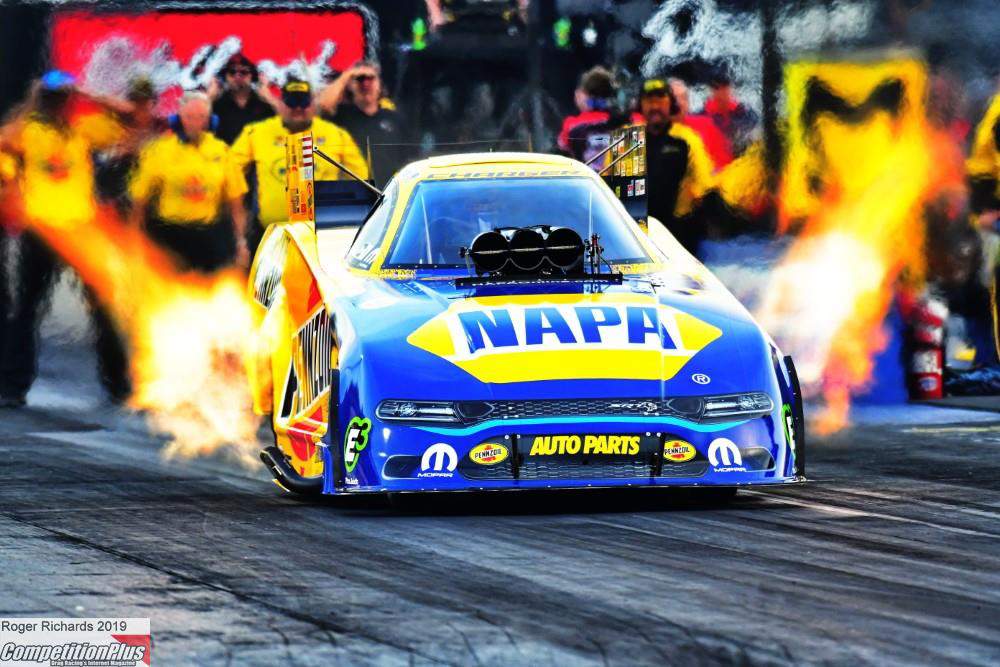 This has been a solid season for veteran nitro Funny Car driver Ron Capps.

The popular veteran has won two races this season – Atlanta and Richmond – and he has 17 elimination round wins to sit fourth in the NHRA Mello Yello Series points standings.

However, Capps has yet to capture a No. 1 qualifying position, but that may change.

“Those are obviously great conditions, great track,” Capps said. “(Rahn) Tobler (Capps’ crew chief) probably came back to the car more times than he ever has, making adjustments. (John) Force was early in the session and we saw that 88 come up, so obviously the conditions here are always good when the sun goes down. He put the rear spoiler down, all kinds of things a little bit outside his box that he normally does. It was kind of neat to see that we were either going to go to the pole or smoke the tires, but he was going to try and that was always fun.

We got out there a couple hundred feet and it moved really hard to the right on me and I thought it had a cylinder out for a second. I turned the steering wheel to the left and it came back and just kept going. I ran at the finish line thinking it was going to be an OK run. They came on the radio and said 87. It was big sigh of relief that it made it.”

Capps has 22 career No. 1 qualifying positions and he was smiling after his performance Friday.

“That was a fun session to watch all the cars keep throwing down and by the time you get up there we had started (in the No. 2 qualifying spot) and by the time we ran (in Q2) we weren’t even in the top half,” Capps said.

“Temperature-wise it will be a little overcast, so you never know,” Capps said. “It could cool off enough and if the sessions get delayed a little bit, especially Q4, we could see conditions get good enough that you could run a high 80 again. I hope not. I hope it gets sunny and it is 97 degrees out (Saturday). Regardless of that, it has been a while since we have seen the number of cars in Top Fuel and Funny Car and that tells you a lot about this place. I sent an email to Bill Bader Wednesday saying ‘Is there anything we can do? You have fans who couldn’t make it and expected to see Sportsman (racers). There were a lot of things he was heartbroken over and is there anything we can do, sign autographs, whatever we can do to help alleviate some of that heart-burn he had. He said, yah to a couple of things and I know (John) Force was running around doing all he could and that is just what Mr. Bader and the whole family brings out of you.

You come here and its like you’re at a county fair. It’s crazy. You have the little town over there and the ice cream. You see his whole family working everywhere you go. There are Baders everywhere, so it is a lot of fun. You feel bad for them, so it was nice to see a big crowd tonight.”

Capps also had the second-quickest run of the first session, a stout 3.965-seconds.