This afternoon, we learned of the passing of Roger Gustin, iconic jet car racer and a friend of the family at CompetitionPlus.com. In honor of our friend we have dug up one of his stories from the War Stories Showdown. We extends our deepest sympathies to the Gustin family, and hope you can share in a laugh with our fallen friend. - Bobby Bennett

NO. 8 QUALIFIER – ROGER GUSTIN
WAR STORIES CLAIM TO FAME – ONCE FELT THE STING OF A FRANK BRADLEY PRANK

TELLING THE STORY OF: IT’S A BIRD; IT’S A PLANE … WHAT THE HECK IS THAT? 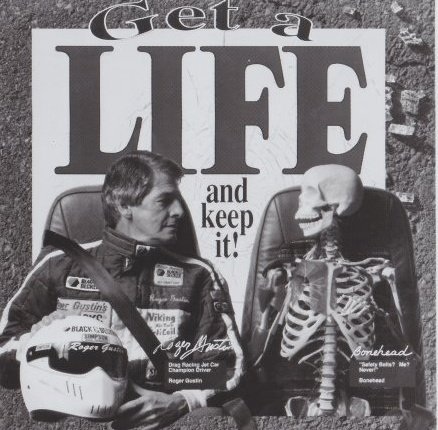 I’m not going to say whether I believe in UFOs or not, all I can tell you is my experience during an unusually warm evening in the darkness of the newly constructed “5” Freeway driving through Northern California.

My story takes us back to July of 1972. I was a rookie jet car driver and at the time, I was living the outlaw life because the NHRA had banned jet cars altogether.

I traded in my nitro car for a Mustang jet Funny Car called “The Time Machine”. After years of having a supercharged, nitro-burning engine in front of me, I now had a J-46 behind me.

Because we didn’t have those NHRA tracks available, we had to run every unsanctioned, obscure track in the United States. As popular as California was for drag racing, the Carolinas and Georgia provided a hot bed of bookings for spring match races. Later in the year, we moved towards the Midwest on our tours. There was only six of us outlaw jet car racers back in the day.

We ran mostly AHRA tracks in the Midwest and west coast. We made our way to California and begin working our way up the Pacific Coast Highway for a show in Seattle.

Because it was extremely hot, we’d sleep in the day and drive at night.

One the night in question, it was still hot … 100 degrees in the day and the nighttime provided little relief. There were four of us; myself, Mike Evengens, Doug Rose, and Dave Corey, the one responsible for getting me into jet car racing who later died on this trip in a racing accident.

But anyway, each one of us had a crew member with us and for me, it was a gentleman named Ray Stewart.

I can without a doubt say Ray Stewart was the most unassuming person I had ever met in my life. He was kicked back and nothing rattled him. A bomb could have gone off 20 feet from him and he would have responded, “Man, that made a lot of noise.”

It was 3 AM and we had decided to switch off driving, so he took over. I kicked back and tried to take a nap when I wake up to see Ray driving with his face almost pressed against the windshield. He’s down the newly-built Interstate 5 in Northern California, staring out the windshield and he’s uncharacteristically rattled. There was no real business development around there, not a whole lot of gas station, just miles and miles of farmland. You could drive for miles and never see a house … just desolate area.

“Something’s after us!” Ray exclaimed.

He was in a state I had never seen him in before. He was excited.

“Something’s after us!” Ray exclaimed again.

“What do you mean something is after us?” I responded.

No sooner than I said this than a bright light swooped in above us. It was an incredible bright light; almost to the point it was blinding. It was coming in out of the west and swooping down and away. This light was low flying … about 25 feet in the air.

This light would come at us at a high rate of speed and then disappear.

There was really no noise associated with the light and we had the windows down in the truck. It would pass by and disappear.

The experience had me asking, “What is this?”

By this time, I was concerned, not really understanding what this was.

We just drove down the road, after slowing down, and watched this thing move around. It would come from the west, this light, and it would disappear. A few seconds later, out of the east, it would swoop down on us and then disappear into the night. Bear in mind, this was only 25 or 30 feet from the ground in the pitch dark.

Listening to the radio earlier that night, we had heard a news report of a commercial airline pilot on a flight from Seattle to San Francisco talking about the UFO he had seen. We were laughing and joking about it earlier.

Since we knew we’d be on the same route, we laughed and joked that maybe we’d see it too. This time, there was no laughing just concern it was going to finally quit playing with us … swoop down and take us to Mars.

We didn’t do drugs, so I knew it wasn’t a hallucination.

We had ruled out every lunar possibility including a meteorite or falling star.

We were facing a UFO.

Then it came from behind and over the rear of all four trailers.

I was extremely concerned by this time as was everyone else. By this time, I remembered Ray had bought a flashlight at a truck stop somewhere down the road.

It came at us again and as I was prepared to shine the light, Ray grabbed me, “Don’t piss them off or they will get us!”

It came out of the North this time and the light was so bright it blinded us and then disappeared. We never heard a sound.

Then this thing made a turn and with my head out the window, it became apparent what we were dealing with.
A crop duster!

We sat there for the longest time trying to figured out how there was no sound. He must have had it throttled down so much there wasn’t a sound.

And for us, as we hit the road, there wasn’t a sound inside the truck either.

When you’re grown men and had the pants scared off of you by a crop duster, you just found other things to talk about going up the road.

We had stared down the Jetsons and lived to tell about it.