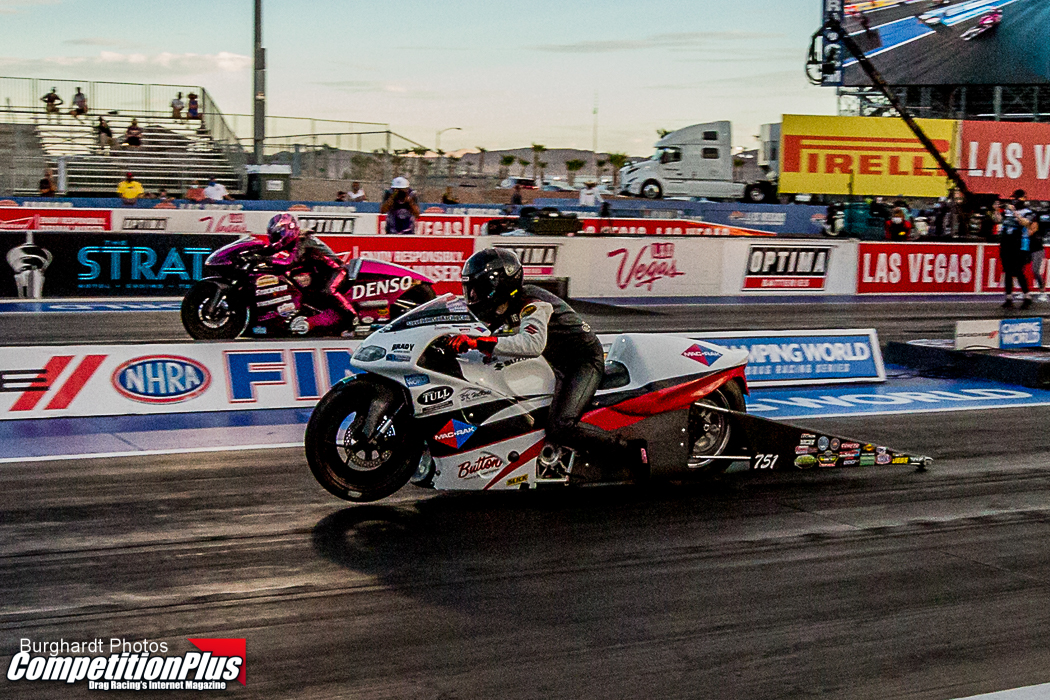 It’s a smaller-budgeted Pro Stock Motorcycle operation from King, N.C., that is frugal with the funding it gets from an assortment of sponsors.

But the husband-wife team of Matt and Angie Smith put their dollars and their determination in the right place Sunday at the NHRA Dodge Nationals at The Strip at Las Vegas Motor Speedway. And they headed home with all the available hardware.

Matt Smith claimed his fourth series championship before the second round of eliminations was over. He had hoped to meet Angie Smith in the final round, bur she went on to take the event Wally trophy, defeating Steve Johnson.

With that, they had the distinction of hitting the first bike-class jackpot in the Camping World Drag Racing Series era.

For Matt Smith, his fourth series crown was especially satisfying because he eliminated two racers from the better-funded Vance & Hines Harley-Davidson team. The first was Round 1 opponent Angelle Sampey, then six-time and reigning champion Andrew Hines. The third Vance & Hines racer and title contender, Eddie Krawiec, fell to Hector Arana Jr. in the quarterfinals. That handed the championship to Matt Smith.

“Well I said it all along: they can play all the games they wanted to. We came here to win this championship and try to win this race,” he said. “I said on an earlier interview today, I'm going to beat Angelle first round, I’m going to beat Andrew second round, and we're going to win this thing fair and square and not have any gimmes. We haven’t had any gimmes all year long, and we’re not starting now.

“That team’s got all the money in the world. They get three times, maybe four times, more money than everybody else out here, and we still beat them. That's a privilege for us and for our team.”

Matt Smith Racing, which also includes Scotty Pollacheck, one of the final-day challengers, ended up first, third, and fifth in the final standings.

“That's a pretty good year for our team, to be a small team like we are,” Matt Smith said. “We're nowhere near the size they are. But man, Denso, Lucas Oil, Mark Stockseth, everybody helps us, Greg Butcher Trucking. I couldn’t do it without them, and it takes all of them to be able to let this little giant come and get to play against the big boys.”

Even so, he said this wasn’t his most gratifying championship.

“No, I think my most satisfying might have been my very first one,” Smith said. “It's because it was my first one. I had to win the race to win the championship. If I didn't win that race, I was going to be third in points. That's what it was - either first or third. And we got it done there, and we did it here. Just so proud to be affiliated with Denso and everybody else.

“The biggest thing is we are a four-time champ,” he said, “and I never in my wildest dreams thought I could ever do that in NHRA.”

It wasn’t all that alarming to anyone who follows the class. He also fields the bike of Pollacheck, whom Angie Smith beat in the quarterfinals to fend off her husband’s rival. Arana took care of the rest for the Smiths when he beat Krawiec.

“Yeah, I feel bad for Scotty. We talked about it before that round. It looks like that motor was going away and obviously it blew up that time,” Smith said. “But it was just disappointing. We don't want to blow motors up, but we don't want to go up and not be able to run, either. They just didn't give us enough time to change that thing. But hat’s off – he had a great year. He went 200 [mph], won the U.S. Nationals, won his first race ever, finish third in points. That’s the best he’s ever done. Got Angie her first 200 mph.”

So Matt Smith conceded he’s not exactly a stereotypical underdog.

“We’re the only team out here that all three members have gone 200 mph,” he said. “So yeah, we're the David with the big rock.”

“It feels awesome. You never know when your next one is going to be and I guess I'm just a true testament of you never give up on your dreams and you work really hard and it'll come,” she said.

Despite the completely unconventional nature of this season, she said it has been “very satisfying - and the main focus was to bring the championship back to MSR [Matt Smith Racing]. Never did I imagine that we could go out there and win the race.”

“I knew all three bikes were capable of winning races at any time, because we have fast motorcycles and if it wasn't for everybody that helped us we wouldn't be here,” Angie Smith said. “This is a true testament to how you work really hard, you keep your head down, and things turn around.”

She expressed pride in topping Johnson “because he's been out here, I think, the longest out of all the Pro Stock Motorcycle category,  and he's one of the best out here and everybody’s the best. This is the elite of motorcycle drag racing. You can never take any rounds for granted, and you got to be on your game each and every round. I was a little late, but you know what? These guys right here [the crew], they gave me the bike to win. I owe it all to them because I was a little late. I've been .15, .20 and .30, [in reaction times], and I didn't want to go and throw it away on a red light. So I just wanted to be conservative, and my bike helped me out on that one.”