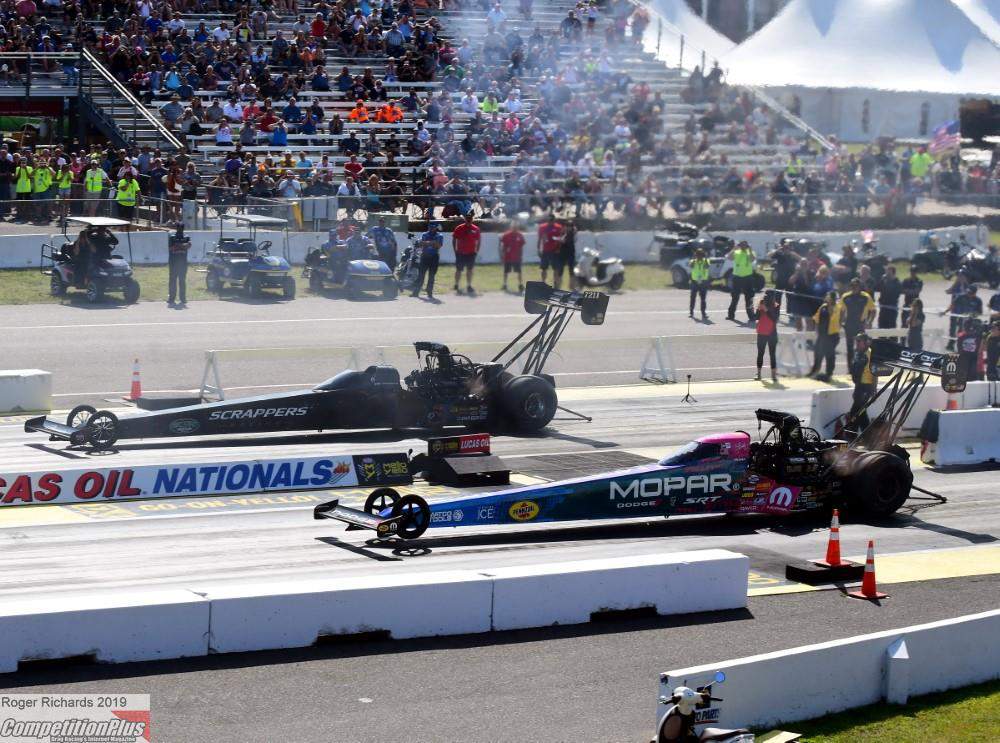 One thing Don Schumacher Racing is not accustomed to in the sport of drag racing is losing.

One of the most dominant teams in nitro racing today, DSR is known for race wins and championship contention. But in recent months, those wins have been few and far between and in Top Fuel - the pinnacle of NHRA competition - the team had not won in over a year. 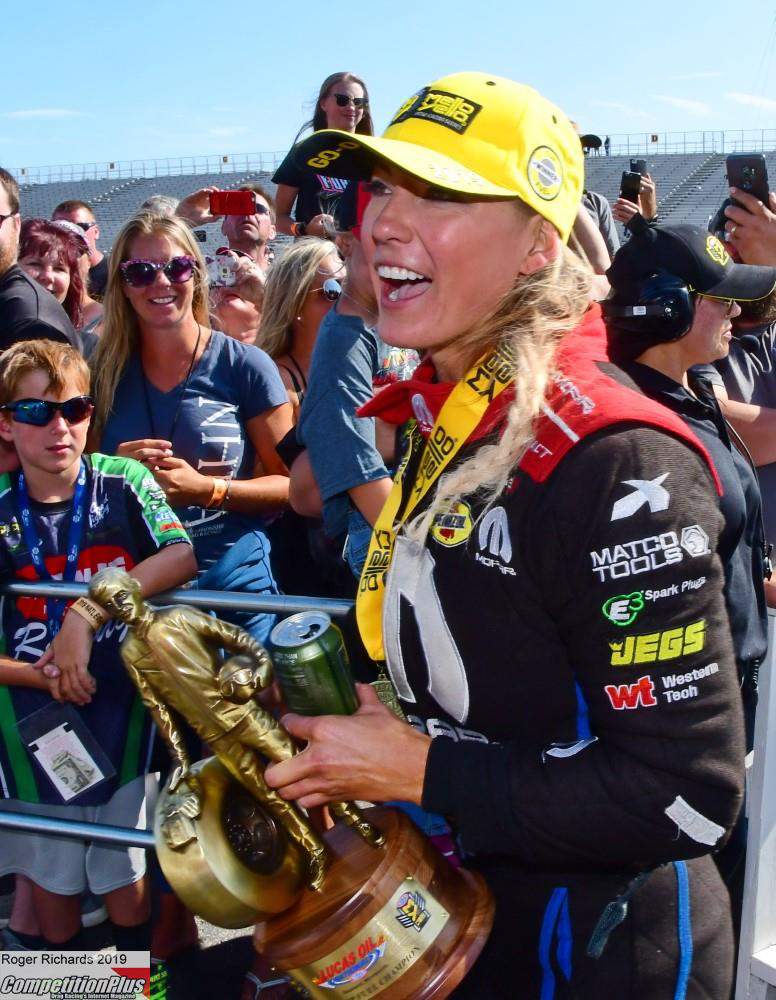 That is, until Sunday.

“It feels just as good as it sounds. Not only for myself, but for the team, for Dodge, for Don Schumacher,” Pritchett said. “There was a recent article put out by AutoWeek that Don Schumacher isn’t going anywhere and we are thriving and this weekend, I think that definitely showed across all the nitro categories.

“I am proud to be the one to put on the final win light, especially for DSR. This is the perfect time to be able to gain some momentum for this season. I feel like, looking at the time sheets, you can see we made four incredible runs and that is something the crew chiefs have worked really hard to do consistently now. And it is coming into play at the perfect time.”

Pritchett broke a 26-race winless drought herself with the victory over Salinas, getting away cleanly and never trailing in earning her first win since Denver last year. Pritchett ran a 3.732-second pass at 321.04 mph in her Mopar-backed dragster in the winning pass - the eighth of her career in Top Fuel - as Salinas began hazing the tires and had to click it off early. Salinas ran a 4.066 at 235.72 mph in the runner-up effort.

“I was feeling good about whatever was going to happen. I was replaying situations in my head, thinking is Salinas going to go in deep? Is he going to hang me out? What is he going to do? But I was comfortable with all of those things,” Pritchett said. “When I launched it stuck and we kept going and when we got to halftrack I knew I drilled it. I had heard him in the beginning but I didn’t hear him anymore.

“Unfortunately, it wanted to let loose at the top end. We were only at 321 mph, but she was not happy at the top end through the lights. We were pushing hard, but in the final round you give it everything you have.”

While the team had been nearly flawless all afternoon, Pritchett admitted that the team’s recent gains on the race track and the confidence instilled by crew chief Todd Okuhara helped ease her mind going up against Salinas and his own legendary crew chief, veteran tuner Alan Johnson.

“We had an almost flawless car in the three runs going into the final,” Pritchett said. “I was sitting in the car watching and I saw Alan Johnson walking over to Salinas while Funny Car was running and in my mind, I’m like, ‘he ain’t Todd Okuhara.’ That is the confidence I have in my own team and I wouldn’t trade it for the world. People have been taking us lightly lately and, while we aren’t trying to show anybody anything, we are just trying to show ourselves that we are the competitors and the champions that we know we are.

“Today we raced really smart from a tuning standpoint and myself from a driving standpoint. I am just really excited because when you see results from hard work, you are able to just work on that even more.”

Starting from the No. 4 position, Pritchett added wins over Kyle Wurtzel, Billy Torrence and Austin Prock on her way to her 15th career Top Fuel final. Pritchett was on the receiving end of a red light by Torrence in round two and was able to dispatch red-hot Prock in the semifinals with a 3.725 to a 4.002 to eliminate the most recent winner on the NHRA tour.

“There is no secret that I have been working at my own craft and to do that doesn’t mean you are going to go in one direction the entire way. In qualifying I did four entirely different things - the way I staged, the way I looked at the beam, the way I looked at the tree. And some of it worked and some of it didn’t,” Pritchett said. “Through that I’m able to pick up on what other drivers do. Billy is a very consistent racer and his times are really good. I’ve been bit before and if you have a chance to bite you have to be the lioness. This is like eat, ride, or die. There was an opportunity that I saw and, unfortunately for him, he jumped the beam and got out of sync. It startled me, but we had a fast pass and we were able to get lane choice over Prock.

“In the semifinals we got a great racer coming off of a win. And when you are on that high and you race with no fear you do really well. He is a hot shot no doubt about it, but today we had a hotter race car and just as hot of a driver. It feels good to put up a win light against that.”

Salinas reached his fifth final of the year with wins over Luigi Novelli, Clay Millican and Doug Kalitta.

It is no secret that Pritchett has had her share of struggles over the past year, chasing sponsorship, missing races and, lately, struggling on the track. Coming into this weekend, Pritchett had faced six first round defeats in her last eight races, but Sunday’s win was a game changer for this team entering the final race of the regular season with the Countdown to the Championship looming large on the horizon.

“Looking at us lately, it would seem (that we have been missing). It was like, ‘hey, where are they at, I know they are here.’ But if you really look at the Western Swing and our qualifying positions, our early rounds, they were all really close races,” Pritchett said. “When we talked about gaining momentum internally, we really were (gaining momentum) in regards to the car, the setup, and the team morale. We have been able to keep that up and, putting all of the puzzle pieces together, we could see what it was looking like when I am not sure everyone else could.

“And the change in our mindset has been huge. You look back here when we won two years ago and it was throwdown central. It was world-record setting conditions and that is what you get excited about. That is what this sport stands for - being the fastest and the quickest. And you have to race with that extreme mindset and I feel I haven’t been able to do that. I’ve been racing out of fear of sponsors, of what the future holds, instead of racing without any fear.

“Once you break that barrier, you are finally able to get that back. It goes all the way from the parts and pieces to the mindset and this has done such incredible things for our confidence, for our sponsors, for our fans and for ourselves. I’m excited. Between the race car and the team and what we are asking (the car) to do, she is behaving beautifully and we couldn’t be happier.”

With the final race of the regular season two weeks away in Indianapolis, Pritchett has secured her spot in the Countdown, the last driver locked into the 10-driver Top Fuel field. Seven drivers have secured their ticket for the postseason, with another three spots to be earned at the Chevrolet Performance U.S. Nationals over Labor Day weekend.