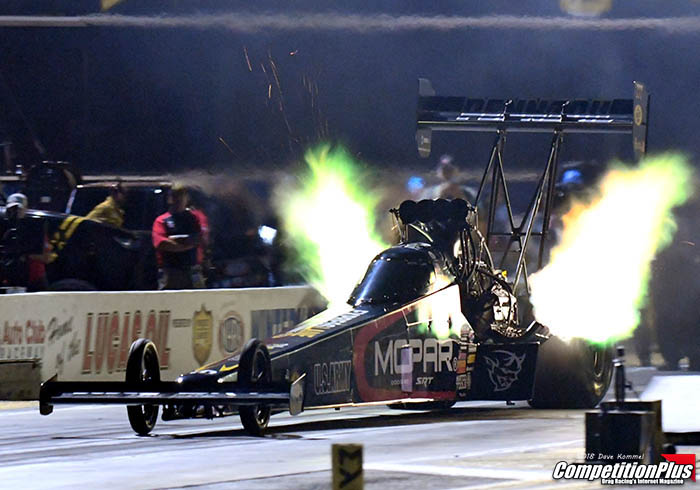 And she hopes to prove that with a strong finish to 2018.

Pritchett raced to the provisional top spot Friday at the 54th annual Auto Club NHRA Finals at Auto Club Raceway at Pomona, dipping into the 3.60s all while holding off some of the fastest cars of the season. If her time holds, it will be her fourth No. 1 of the season and 11th of her career.

“When you have this weather - horsepower weather - and we have this time of day, you can just feel the energy,” Pritchett said. “The reason there is a smile on our face is we were able to execute what we wanted to do. Steve (Torrence) really laid it down with that 70, so we knew it was out there. And when we ran that low of 77 in Q1, we knew that there was so much more in it.”

Pritchett blasted to the top of the charts in Q2 on Friday, driving the Mopar Dodge dragster to a 3.649-second pass at 329.34 mph, putting her in a position for her first No. 1 since July.

“It is a testament to the chassis work that we were able to do back at the DSR shop. We have really been able to put that power to the ground,” Pritchett said. “Tomorrow we are not going to have these same conditions, so that is why we are excited to be able to capitalize on it today.

“Going fast is super fun. I went out there and it shook a little bit and when it takes that shake and it gets right through there that’s when you know. You know before you are even at half-track the kind of run you are on. Then when it sticks and it doesn’t want to move around, that is when I am like this is it. Those are the moments, besides eliminations, that you can’t wait for because that is the epitome of all of the power and all of the work coming down to that Olympic moment.

While Pritchett won’t have a chance to race for a championship this weekend, with Torrence securing that honor two weeks ago in Las Vegas, there are still plenty of things she can take away from the season finale. Among them, trying to earn her third win of the season and first since she sweeping the Denver weekend in July and finishing the year with back-to-back final round visits after finishing runner-up in Vegas two weeks ago.

“In my opinion, we are peaking just fine. If anything, it is going to be one heck of a start to 2019,” Pritchett said. “We can’t change the past, we can only focus on the future. We wished we could have peaked earlier, but the momentum that we had in Vegas definitely has been transferred over to California. I was the one that put a stop to that momentum in Vegas and I am going to make sure I don’t put a stop to it here.”