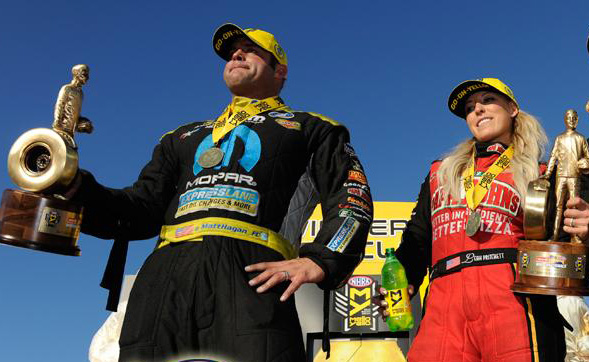 There was some doubt that the Don Schumacher Racing team – a power player in the NHRA Top Fuel and nitro Funny Car ranks – was going to test at all at Wild Horse Pass Motorsports Park in Chandler, Ariz., the week before the season-opening Winternationals Feb. 7-10 in Pomona, Calif.

“We are at this moment confirmed to make some type of presence there,” Pritchett said Wednesday afternoon. “What days I’m not exactly sure but if you’re asking regarding TF4, my dragster, we will have the opportunity to make a couple of shakedown runs. It’s a new development that I couldn’t be more excited for. I totally plan on being there. My foot needs to hit that gas pedal.”

Pritchett acknowledged the uncertainty of the preseason testing was weighing on her.

“It was a very uneasy feeling, the thought that we had through the majority of the offseason that we weren’t going to be able to test,” she said. “Rolling straight from our last hit down the track at Pomona 2, which was E1, straight into the 2019 season when we have a new assistant crew chief with Neal (Strasbaugh) and we have new chassis developments that were created by Mopar and I have new driver compartment situations and we just need a shakedown day. I’m a happy camper.”

Hagan also is thrilled to get to go to Arizona for some test laps.

“We’ve booked flights, so unless Don (Schumacher) changes his mind we will be able to make runs,” Hagan said. “I’m pumped up. It has been three months and we will get to shake it down a little bit. We’re not going to change a whole lot of stuff, but more or less just shaking the car down and getting a feel for it and getting the bugs worked out. It is hard if you’re not testing and go to Pomona and make a full pull and you have not been in a race car. So, for me that is going to be huge.”