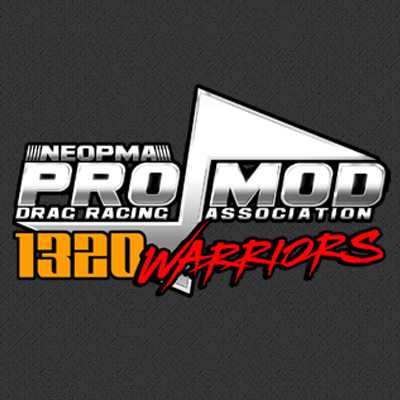 At a time when even the NHRA decision-makers reportedly have been debating a return to quarter-mile racing, the Northeast Outlaw Pro Mod Association (NEOPMA) will break with its 27-year 1,320-foot tradition and shorten its course on the dragstrip to eighth-mile starting in 2020.

NEOPMA President John Mazzorana announced the move in advance of the organization’s event this weekend at Maryland International Raceway at Budds Creek, Md.

Mazzorana said the idea of a switch might be hard for drivers who always have raced on the quarter-mile but said the move is part of “a continued drive to make this [association] better. It’s a sign of the times. More and more racers want to race eighth-mile.”

NEOPMA, which formed in 1992 as the Northeast Pro Shootout Association, races a Friday-Saturday format at Atco Raceway in southern New Jersey; Maple Grove Raceway near Reading, Pa.; and at Capitol Raceway at Gambrills/Crofton, Md., and Maryland International Raceway.

According to Mazzorana, the change to eighth-mile racing came from a number of factors, mainly the need to keep the sport more affordable – and therefore boost the car counts at each event – and to satisfy the trend among racers to compete at shorter distances.  Other similar sanctions race at the eighth-mile distance, and several others are making the switch for next season, longtime promoter and NEOPMA supporter Dave Hance said.

Three years ago, Mazzorana took a survey. He said results showed at that time that “80 percent of our racers wanted to run quarter-mile. The two months ago, we took another survey of our racers, and 22 of 29 people we contacted wanted to run eighth-mile. So it was a reversal. It was a shocker to me.” But he said he thought, “OK, if that’s what you want . . .”

In analyzing the turnouts, he said he recognized that his 16-car fields sometimes weren’t full: “For a 16-car field, we were getting 10-18 cars, 19 cars maximum. We were just barely making it, and in some cases not making it at all. And it made the tracks upset, because they were promoting a 16-car field.”

The reduced costs of racing to the eighth-mile, he said, should be a boost to NEOPMA’s racer base, which still is loyal.

“The retention rate of our racers is about 90 percent. We don’t lose many,” Mazzorana said. “This is a good place for them to race, because it’s convenient, it’s cost-effective, and we pay out well for as small a club as we are.

“We’re a not-for-profit club,” the long-time NEOPMA head and retired banking executive for JPMorgan Chase & Co. said. “We don’t do this for money. I do this absolutely for free. And most of the people who work with me do this for free. We give every nickel we make back to the driver – because we feel like he’s spending all the money so he should get all the reward. We try to do that all the time. We feel that’s the right thing to do. And I think that’s one of the reasons we’ve survived 27 years. 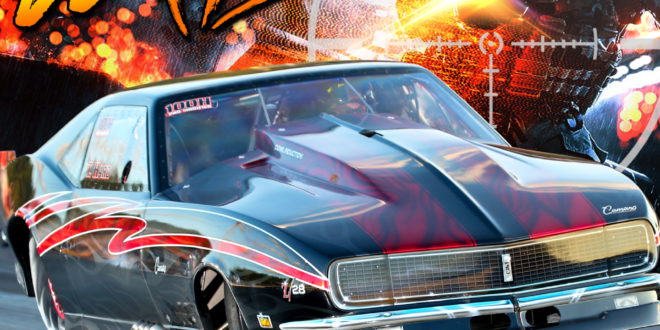 “We’re local. We give the guys a good deal. We charge an annual membership fee for $1,000. (We actually raised it from $750 to $1,000.) We allow a driver and three crew members into all of our races for free. Our first-round loser gets $500. So he gets his money back in two races just by showing up. And the winner gets $5,000. So we have a very good payout program, and it’s an inexpensive way to get in,” Mazzorana said. “We were invited [to develop a schedule with] 17 races this year. That’s because we have a good reputation. We put on a good show.”

Most NEOPMA competitors live within a 300-400-mile radius of the tracks where they compete, although some come from as far away as Canada, Florida, and Puerto Rico. So most of them, he said, are “homebodies” and are happy because they can “get home to their families. They can go home Saturday night or Sunday morning” and be able to clock in at work Monday morning. Some own their own businesses; some don’t. But even the ones who are bosses at work don’t want to take time away from their primary jobs. So, just like with their more high-stakes NHRA counterparts, NEOPMA’s drivers are satisfied with the nine races and locations of them.

Scheduling around what Mazzorana called “the big-name brands” is a bit of a challenge for him. And with so many sanctions vying for entries and sponsors in the fragmented market that is drag racing, he said, “The reality is that the sport is fractured. Go back when the IHRA was the only game in town. They had full, gigantic fields. Then all of a sudden IHRA lost sight of the objective, which was bringing racers to the racetrack and having fun.

“IHRA lost [its draw], and ADRL came on board. They did a good job for a number of years, then something happened and they fell apart. Now you’ve got NHRA, PDRA, local clubs like our organization – and then tracks do their own programs. So it is fractured,” he said. “You’ve got this pie you call Pro Mod. Although the pie is bigger because you’ve got more cars, you’re getting a smaller slice of the pie. That’s the biggest problem we have. Even PDRA is struggling; they’re not getting the car counts they had a few years ago.  Right now, small groups like mine are [hurting at least a little]. People can’t afford to go to all of the [races], so they’ll pick and choose what satisfies their needs.”

And he’s hoping this change to a shortened course will entice more racers back. Maybe some raced at other venues because it was eighth-mile racing rather than quarter-mile. Maybe some sat out more often than they would have otherwise.

“There’s no simple solution,” Mazzorana said. “But I think local groups like mine . . . we love this sport. But the guys are driven by ego. I think if we can get the guys to understand that we can promote them and give them a few minutes in the limelight on an ongoing basis, they become the local hero. And that’s what they like.”

He said that’s another factor in the NEOPMA’s longevity.

Crowds are better close to home, because family, friends, and neighbors show up – something they couldn’t or wouldn’t do to support their driver if he raced at Pomona, Calif., or Atlanta or Houston, for example. 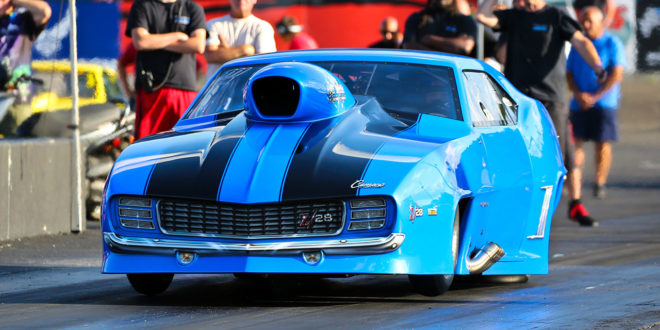 So this change to the eighth-mile, he’s hoping, will be the anchor to keep NEOPMA racers “at home.”

Hance, who owns New York Motorsports, said he doesn’t believe the mechanical tweaks will prohibit anyone from doing that.

He said what racers will have to change is “not a whole heck of a lot. Perhaps the biggest changes will involve gear ratios. If they’re not going quarter-mile, they can put more gear in the car and it’ll help with eighth-mile performance. You don’t need a new car or a new driver. Just a few bolt-on modifications, mainly gearing, and you’re ready to race. Other than that, there’s not much more. That’s what made it such a simple changeover.”

Always envisioning fresh opportunities for racers, Hance said, “This could open other doors. When we grow legs and get this thing going, you could have a genuine World Series of drag racing, where you have a champion or even top five contenders from Midwest, NMCA, PDRA, Northeast – and I’m hoping some West Coast association will follow. In talking with the Qatar Racing Club, they’re going to adopt this standard rule package, as well, for their 2020 winter season. So now you’ll have international eighth-mile flavor. And we could all meet up someplace for a ‘top dog’ deal.

“Before, you couldn’t even compare your performance to guys in the Midwest or NMCA, because there were so many associations with non-standard rules. You can’t make a comparison, because you’re not comparing apples to apples,” Hance said. “You might not have the fastest car, but you might have the fastest car for your type of power.”

The NEOPMA move at least will provide its racers that as its takes effect next season. Already NEOPMA has approved of three power-adders for its engines: nitrous-aided, supercharged, and turbocharged. So if nothing else for the immediate future, racers across the country can compare their elapsed times and speeds in a meaningful way.

While NEOPMA’s move certainly will gather racers under a wide umbrella of nearly identical rules packages, that’s putting the cart before the horsepower a bit.

Mazzorana just marveled that NEOPMA will be celebrating its 28th birthday in 2020. But for the veteran racer who said drag racing changed his focus as a restless teenager on the tempting streets of Brooklyn, forming NEOPMA – or rather the Northeast Pro Shootout Association – doesn’t seem so long ago. He remembers vividly gathering with his equally passionate friends at a diner in Dixville, Long Island, N.Y., to bring structure to their obsession.

“We wanted to do something different,” Mazzorana said. “We were inspired by the IHRA. They had this Pro Mod program that we were just getting familiar with. It was fantastic,” he said.

They started with nitrous and naturally aspirated Pro Stock cars and evolved into what for more than a quarter-century has been a reliable haven for drag racers. Now it’s on the verge of merging with a small swell of disruptive trendiness in a passage that perhaps could preserve and even grow the class.

Mazzorana was a leader for change in 1992. Today he says he’s reluctant to part with tradition, especially what he thought was the very essence of the sport, quarter-mile racing. But this move has stirred a little bit of those memories, memories of when he was eager to change and knew everything would be all right. He’s cautious as 2020 approaches, but he said he’s willing to step out on faith.

“We have got to do something to bring more people into the sport or it’s going to die,” he said. “We need to get young people involved.”

“He’s open-minded,” Hance said. And Hance, who built the Shakedown at E-Town from a vision to just six or seven cars the first year to an entry list of 200 within a few years and to a fall classic, knows what that’s like, to step out on faith.

“I like quarter-mile in NHRA,” Hance said. “The rules are good for it. The teams that run there have the budgets, the Safety Safari, the facilities. Outside of NHRA, though, it’s tough to make that case. The cost is cheaper running eighth-mile. You don’t have to have safety [measures in place] for stopping at 250 miles an hour. Big difference. The resources are just not there outside of NHRA.

“So it’s not that quarter-mile or eighth-mile is better than the other. It’s just a matter of resources for the people doing it and the tracks that are having the event,” he said. “Not everybody has NHRA Safety Safari and the resources and the facilities. So one’s not better than the other one. It’s just that eight-mile racing simply is, Hance said, “more manageable” for the lower-budgeted operations.

NEOPMA might not have all those resources, but it has the ones that matter to its loyal racers. Adapting and listening to what its racers want, in spite of how the President of the organization might feel, is something money can’t buy.