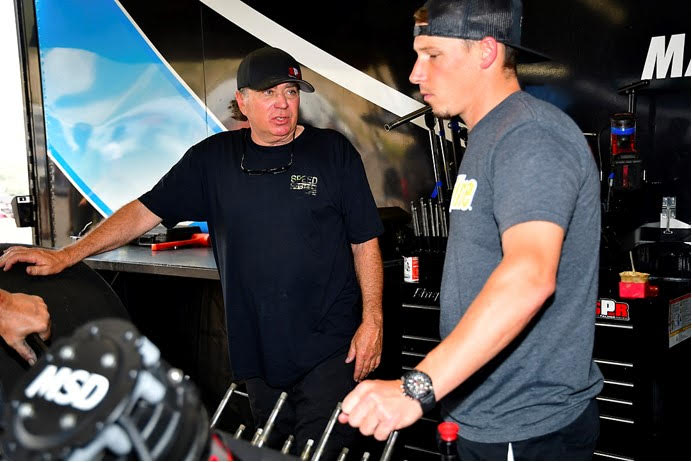 Palmer planned on competing in last weekend’s Mile-High Nationals at Bandimere Speedway in Morrison, Colo., outside of Denver, but his plans changed.

Palmer opted to sit out the event and let Alex Laughlin make his Top Fuel debut in the Havoline-sponsored dragster.

“This is a new car (dragster) that we just got last year,” Palmer said. “I ran it at Gainesville. Then Houston, we had both cars there, but I only ran one. Lee Callaway drover one of them. Then this deal came up and I had this in the trailer coming here for myself because I've got sponsors here too.

“(Alex) was in a bind because of his Pro Mod deal not coming. So, he was in a bigger bind. I'm not in one because I'm not running for points, I'm just doing whatever I want like Pro Mod races, whatever Top Fuel races I want. It just made more sense. We talked about bringing two, actually have two here, but we talked about running two but it’s Denver. He’s got a corporate deal so we might as well just focus on that, help him get through this. He was in a little bit of a bind, so it was just a fun way to work it out.”

Laughlin, who pilots a Pro Stock car, Pro Mod and Top Alcohol Dragster, didn’t have any luck in his first career Top Fuel pass. He had problems with his reverser after his backed up his burnout and his dragster didn’t leave the starting line.

Palmer was thrilled to lend a hand to Laughlin because he’s been on that side of the fence several times, especially early in his career.

“Yeah, it's cool because I've been in a bind before and there's usually not anyone to really help you get through the bind,” Palmer said. “I've always relied on the Laganas. Us and the Lagana family have kind of stuck together and helped each other throughout the last 20 years. This was kind of neat because it was a different kind of help. He had a corporate deal he's trying to take care of and honor his part of the agreement. So, this kind of a fun way to honor it.”

Palmer was competing in Top Fuel full-time for the last several years and up to 2019 before he diversified his racing plans.

Palmer said he will make at an appearance at the recently announced the “Stampede of Speed,” Oct. 3-10, that’s being run in conjunction with the FallNationals at Texas Motorplex in Ennis, near, Dallas.

“On Monday night (Oct. 4), we’ll have all of our contraptions there,” Palmer said. “They call it the Nitro Sideshow. It’ll be two Top Fuel dragsters. We're going to have a band, (punk rocker) Scott Sturgeon’s band is going to be there. We're going to roll up there, make a run with probably a couple of Top Fuel Harleys. A couple of Nostalgia Funny Cars, a couple of Pro Mods, and Outlaw Pro Mods. This will all be eighth mile and then we'll run a Chevelle and the Studebaker that runs on nitro. We’ll run those and then we'll finish off with the dragster. Lee Callaway will drive one and I'll drive the other one.”

Palmer said his plans to drive his Top Fuel dragster at the Menards NHRA Nationals Presented by By PetArmour in Topeka, Kan., Aug. 13-16.

Palmer has competed in one race in Top Fuel at the season-opening event in Gainesville, Fla.

“We've been doing the Mid-West Pro Mod Series with another guy's (Outlaw) Pro Mod, and we’ve been doing good winning races,” Palmer said. “So, we’ve been busy. We run (Jon Stouffer’s) his whole team. He has a ‘71 Cuda. It's a beautiful, awesome car. It's been a lot of fun.”

Although the COVID-19 pandemic crippled some racers, that wasn’t the case for Palmer.

“Honestly the last two years even with the COVID deal and all that, have been the best two years I've ever had,” Palmer said. “The last two years even in rough times, I haven't put all my eggs in one basket. I have my own Outlaw Pro Mod; I have an alcohol funny car.  We went to the 64-car Funny Car Chaos. I think we were ninth or tenth qualifier in that. Went to the final round in their b-field. It ran great. I haven’t driven a (Top Alcohol Funny Car) in 22 years. It was fun. But I keep that open because all the people who sponsor me or help me or race with me during the COVID virus when we were all shut down with no fans, we were still racing. We were on the Midwest Series.

“My obligations to our sponsors are easy. We just go and have a good time. I have the best sponsor deal in the world still to this day. Nobody has a better deal than me. It may not be the most money but it's the best deal in the world because I’m lucky I get to do whatever I want.”

There’s was time not too long ago when Palmer was struggling to make ends meet, but that’s not case anymore.

“Nope,” Palmer said if he saw this day coming. “Even five years when Tommy and I started doing this, nope, never thought that would happen. So, it's just been fun. In 2019 before the virus Tommy said, ‘What we can do next year, Scott?’ I said, ‘I'm not running the whole season. I'll never run 24 races again. I'm going Pro Mod racing; I’m going to go do this. But we’ll go do 12 and run it like (T.J.) Zizzo. Zizzo comes out and runs hard. That’s what I want to do. Then I still have time to go Pro Mod racing. Kind of like what Alex does. Alex goes out and does a variety of things.”