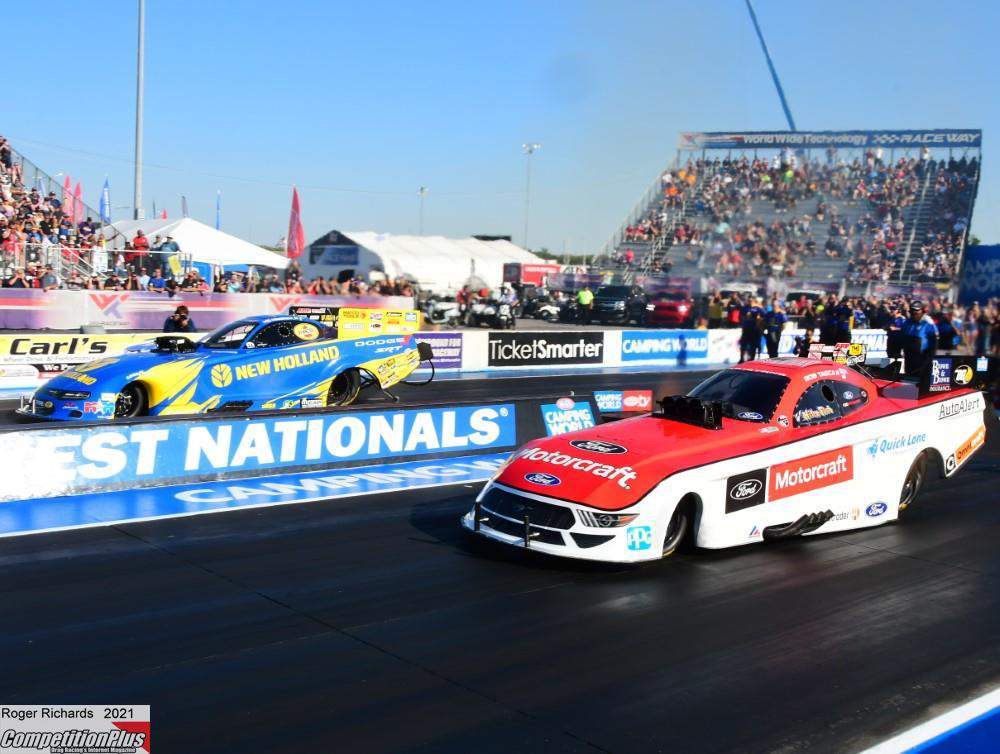 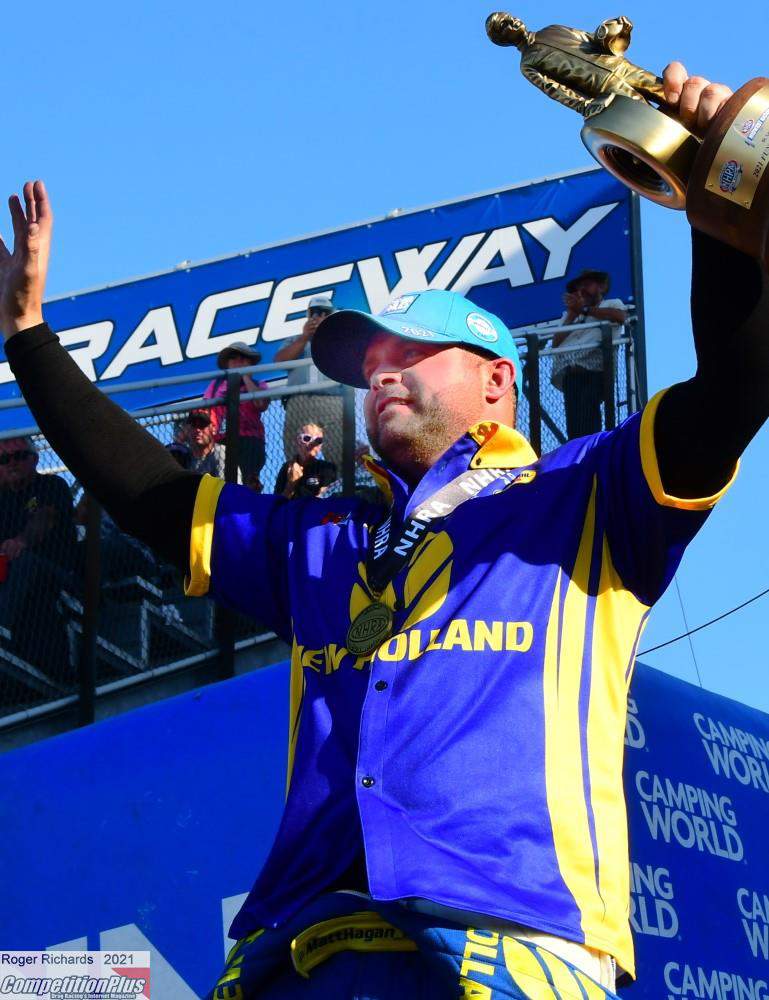 Hagan drove his New Holland Dodge Charger SRT Hellcat Redeye from the No. 1 qualifying position to victory lane at the Midwest Nationals Sunday in St.  Louis.

This was Hagan’s 39th career NHRA nitro Funny Car national event victory and third this year to go along with his wins in Denver and Brainerd, Minn. The win also pushed him to the top of the points standings – 59 in front of second place Ron Capps.

Hagan received a boost from his substitute driver Tommy Johnson Jr., who won the Reading event, and the points he earned counted for Hagan.

On Sunday, Hagan had a bye in round one and then defeated J.R. Todd, Cruz Pedregon and Tasca.

“Thank goodness we had a bye run because we went out there and smoked the tires,” Hagan said. “Dickie (Vebables, Hagan’s crew chief) obviously made some adjustments and just threw down all weekend. In qualifying and race day, if you give that guy a little time he just dials it in. I’m just so blessed and lucky to have him here. It’s one of those things where I have won a lot of races and a lot of championships with that guy and I just trying to go up there and do my job and leave on time and keep it in the groove. When you have a combination and package like that, it is really hard to beat.”

As good as Hagan has been, especially the last two years, it wouldn’t be surprising for him to boast a little – but that’s not the case.

“I think it so humbling out here, but you have to have that confidence and mentality of winning,” Hagan said. “But it changes so fast day-to-day and race-to-race if you don’t qualify or you go out in first round or your car breaks that we take it in stride. These things are the most humbling things I have ever been around. For me, I try to keep it in perspective and over the years, the championships I have won, I have really been able to take and minimize what I can control, and I focus on that and then everybody else has to do their job and you depend on them, the people who you put in place to do that.

“For me, you start to feel the pressure because we only have four races left. I have been there before, and I understand the hunt and I know that our car is going to be a really serious contender and honestly, I really think we can win this championship. Capps is going to be tough; Robert (Hight) is going to be tough - you name it. It’s a slugfest out there. These crew chiefs are licking their lips and that puts even more pressure on us as drivers. It really comes down to the starting line.”

Hagan acknowledged watching Johnson Jr. win in Reading was a different experience for him.

“It was emotional for me,” Hagan said. “That’s your race car and that’s your team. I had my pom poms up and was cheering for him. Tommy did a phenomenal job. I knew he could, but it was bittersweet for me because I wished I was in the car. But to be honest with you, the new rule that they came up with, COVID is not going anywhere, and we have to deal with it. It gave me a real opportunity as a driver to take a step back and say ‘Hey look. I’m not ready to be in this race car. It gave me a chance to heal my body.’

“If you are not 100 percent out there when you’re going 300 mph you have no business being in a race car. For me, it was tough because I wanted to be driving the race car, but I couldn’t hardly breathe well enough to walk to my bathroom to take a pee. I had no business out there and it gave me time to recover and feel like I’m 100 percent to come out here and do it. I’m blessed and humbled to be here and I feel 100 percent and I’m ready to go win this championship.”