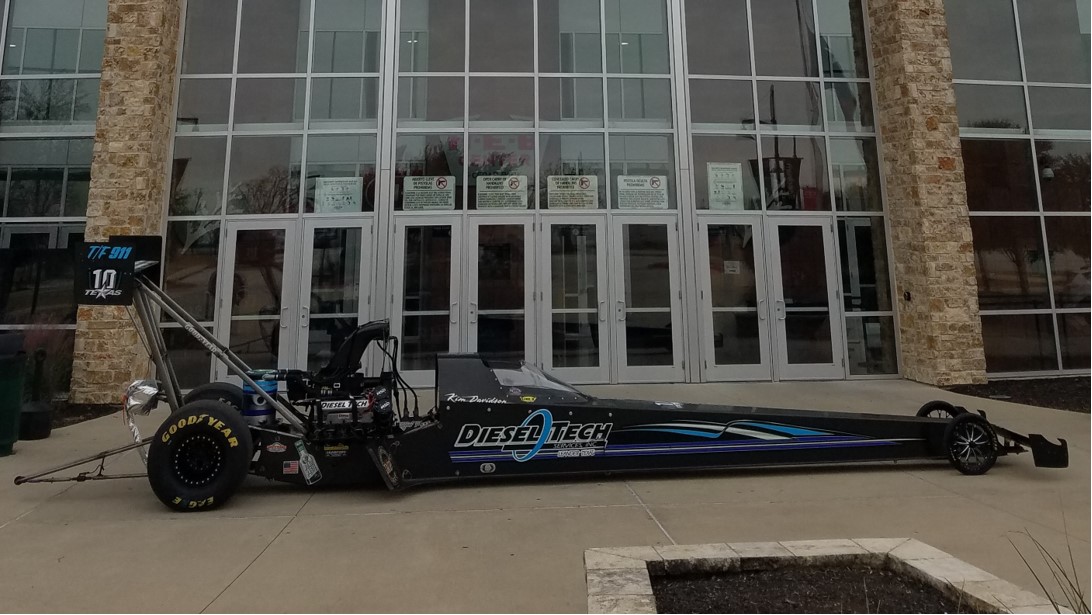 Like Shawn Reed, Kebin Kinsley, and the Scott Palmer/Tommy Thompson team, Texas drag-boat racer Kim Davidson wants to go quick and fast on land, too. And in a few short months, he has made big strides with the Diesel Tech Services Dragster, which last fall was locked in a garage at Leander, Texas, just north of Austin, surrounded by raging floodwaters.

Davidson has teamed with 2018 NHRA Rookie of the Year candidate Jim Maroney, who in only six appearances for strategic partner Terry Haddock earned one round-win (against Brittany Force, at Denver) and beat all of his first-round opponents on the Christmas tree.

Maroney’s average reaction time was .062 of a second. That matched class reaction-time leader Antron Brown’s number (.0625) in 47 race-day pairings. It also ranked Maroney second among all drivers during the events in which he competed, ahead of Top Fuel contender Leah Pritchett’s .074.

So it’s no wonder Maroney was Davidson’s first pick when he looked for a Top Fuel driving partner for this year’s Mello Yello Drag Racing Series season.

“After seeing his killer reaction times and the way he handled the car, it was an easy choice,” Davidson said.

The team will start testing at the end of this month at Wild Horse Pass Motorsports Park at Chandler, Ariz., close to Maroney’s home in the Phoenix suburb of Gilbert. Its debut will be at the Feb. 8-10 Lucas Oil Winternationals at Auto Club Raceway at Pomona, Calif.

Maroney and Davidson will share driving duties throughout the year. They will announce their schedule of events later.

Davidson Motorsports has been competing on the liquid quarter mile for the last 15 years, with blown alcohol and Top Fuel Hydros, most notably with the “Disorderly Conduct” entry.  Davidson decided in 2018 that the team would switch to asphalt and campaign a Top Fuel dragster.

“We’ve tried to put all the right pieces in place to have a competitive team from the start, and we’re excited to start testing.” Davidson said.

Maroney Racing has race cars from seven other forms of motorsport in his garage at Gilbert. And he recently got to show them off on Phoenix TV station FOX 10, in an interview with Cory McCloskey, Arizona Morning weatherman / news personality, in a feature segment. He traced his family’s history in drag racing, showing photographs of his father, Jack Maroney, and the tribute ‘70s Vega Funny Car that will honor him. Preston Maroney, the oldest of Jim and Laura Maroney’s four children who has competed in sprint cars and motorcycles in addition to dragsters, will drive that car. On camera, too, was the sportsman-level dragster that daughter Hailey drives. Colton Maroney, the youngest son in the family, races dirt sprinters.

“Terry Haddock gave me a great start last year, and I am excited to get started this year and capitalize on that," Jim Maroney said. He told Arizona Auto Scene that driving a 10,000-horspeower dragster “is amazing” but noisier and shakier than his nostalgia car is.

“It’s more than I expected, having driven nostalgia cars for 30 years,” he said. “I thought it would be a pretty easy jump into Top Fuel, but it was a bigger change, a bigger jump than what I had expected.” But, as he told McCloskey, it’s a thrilling extension of his time “playing with LEGOS and making race-car noises down the hallway as a kid.”

Despite a different reality from what he had imagined, Maroney posted a couple of three-second passes at more than 300 mph as he raced at Denver, Seattle, Epping, N.H., Norwalk, Ohio, and Sonoma, Calif., as well as in the Countdown to the Championship opener at Reading, Pa.