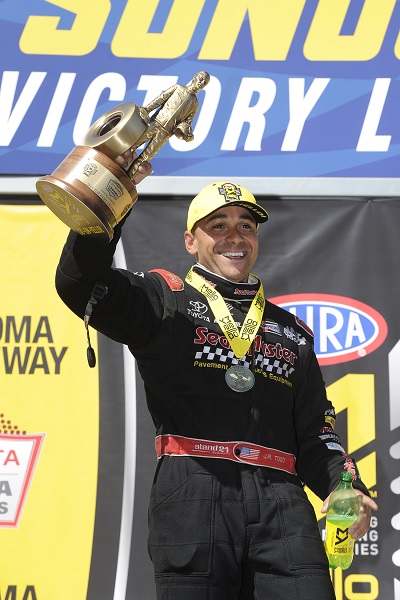 Inside every Top Fuel driver could be a Funny Car daredevil just waiting to get out.

J.R. Todd, 34, admits racing a Funny Car was on his so-called bucket list, even though he's not officially old enough to have one of them.

Todd, who joined Kalitta Motorsports in March 2014 as a Top Fuel driver, will move over to the Funny Car position vacated by Del Worsham. Filling Todd's seat in the SealMaster dragster will be Troy Coughlin Jr.

DHL will continue as the primary sponsor on Todd's Toyota Camry Funny Car for the entire season.

"I never once expected to be taking over driving the Scott Kalitta, DHL car," Todd said. "That’s a special car for the Kalitta team. With one of the greatest drivers ever driving it, Del Worsham, I expected him to finish his career there, and definitely not anytime soon. There had been talk of me making some runs in one of our cars just to cross over my license."

"Driving a Funny Car is something I’ve wanted to do for the past couple of years. Things are happening pretty quick now."

Todd readily admits whirlwind is such a vanilla word to describe his life since he received a call during the evening of March 28, 2014, from team owner Connie Kalitta asking if he would like to travel to Las Vegas and drive his car for the rest of the weekend.

Todd not only qualified in the impromptu driving gig but also scored a first round victory. The first race was just the tip of the iceberg as Todd, a former Junior Dragster champion, eked his way into the Countdown and worked his way through the field, ending his season as the championship runner-up.

Todd has raced his way to three NHRA event wins in 11 final rounds since he boarded a plane from snowy Lawrenceburg, Ind., en route to Las Vegas.

"I was just thrilled and honored to be driving the Bounty Hunter dragster," Todd admitted. "And I wasn’t for sure if I was even going to get hired full time to drive for Connie. I just wanted to go out there and prove that I could get the job done."

Todd's career is one which has been built on proving himself time and time again. From his initial foray into Top Fuel driving for Bruce Litton in the early-2000s to earning his first full-time job driving for Dexter Tuttle and then Morgan Lucas Racing, Todd has refused to allow any grass to grow underneath his feet.

Even between rides, Todd wasn't content handing out resumes and watching drag racing. Back in 2003, he immersed himself behind the scenes as a crewman for Funny Car racer Bob Gilbertson, who employed crew chiefs Nicky Boninfante and Tommy DeLago, key figures now in the Kalitta Motorsports Funny Car operation.

"I spent three years working over there, and I’ve got an appreciation for Funny Cars," Todd said.

In 2005, Gilbertson offered Todd the opportunity to make a short test hit in the Funny Car. He knew immediately this would be a path he'd like to pursue, although his roots were entrenched in dragsters.

"By the numbers, our early incremental numbers then, they were really quick for that time, and they’re not far off from what they’re running today," Todd said. "So, it was a pretty good run at that time and ever since then, it’s been in the back of my mind that I want another shot at driving a Funny Car."

In planning for 2017, banter had been going around in the Kalitta camp about Todd making some unpublicized runs in one of the team's Funny Car.

"I had talked to Nicky [Boninfante] here and there about it and then before I knew it [Kalitta VP of Operations] Jim Oberhofer's calling me saying that Del told him he wouldn’t be back next year," Todd explained. "Pretty much everybody in the organization knew that I wanted to make some runs in one and that I would be open to driving it."

"Connie explained to me, “That’s a special car and not just anybody can drive it, and you are the right guy for the job," Todd said. "For me, that was a huge compliment, and to have his blessing is pretty awesome."

Todd understands he's got a physical challenge ahead of him in manhandling a 10,000 horsepower Funny Car which sometimes can have a mind of its own since the advent of the laid-back headers. He is quick to agree that with or without the laid back headers; a Funny Car ride is intense.

"With laid back headers or regular headers, these things are buck wild," Todd explained. "I don’t think you can mentally prepare yourself for a Funny Car or a Top Fuel Dragster without just getting in there and hitting the gas and doing it.

Todd said the team plans to go testing as soon as possible, and make a big push at the Phoenix Nitro testing event prior to the NHRA Winternationals in Pomona, Ca. With NHRA's technical department reportedly on the fence about what to do with the radical headers, Todd said he's going to be prepared regardless.

"I’m not even sure what’s going to happen with the headers with NHRA, with the rules," Todd said. "Either way, I’ve been going through it in my head the last few days, trying to prepare myself.

"Nothing gets you prepared other than getting in there and hitting the gas. More than anything, I probably need to get back in the gym and lift some weights."