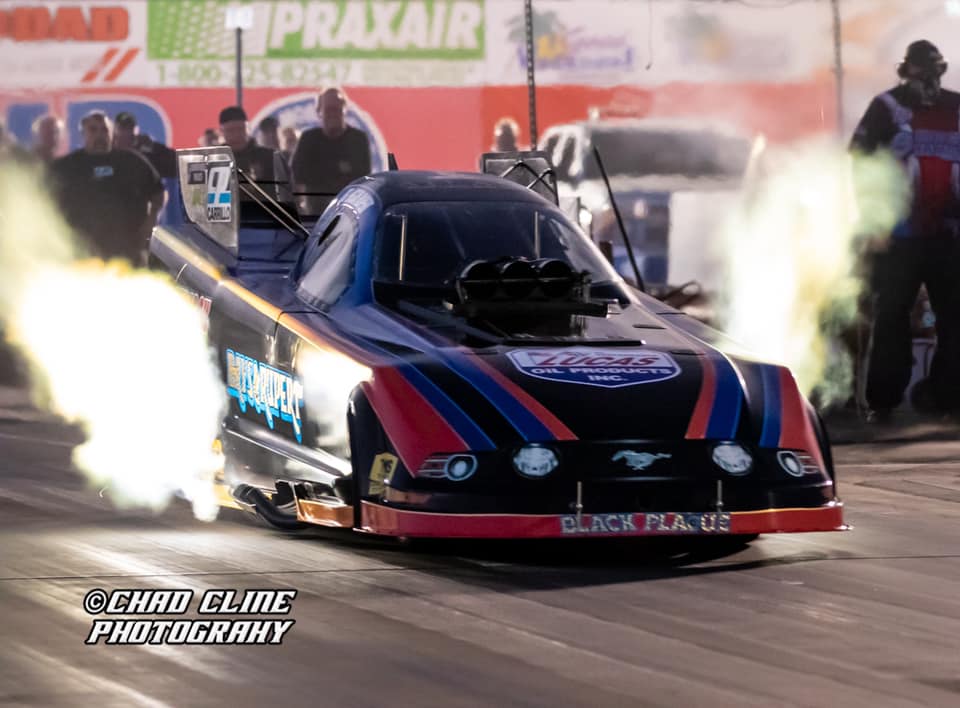 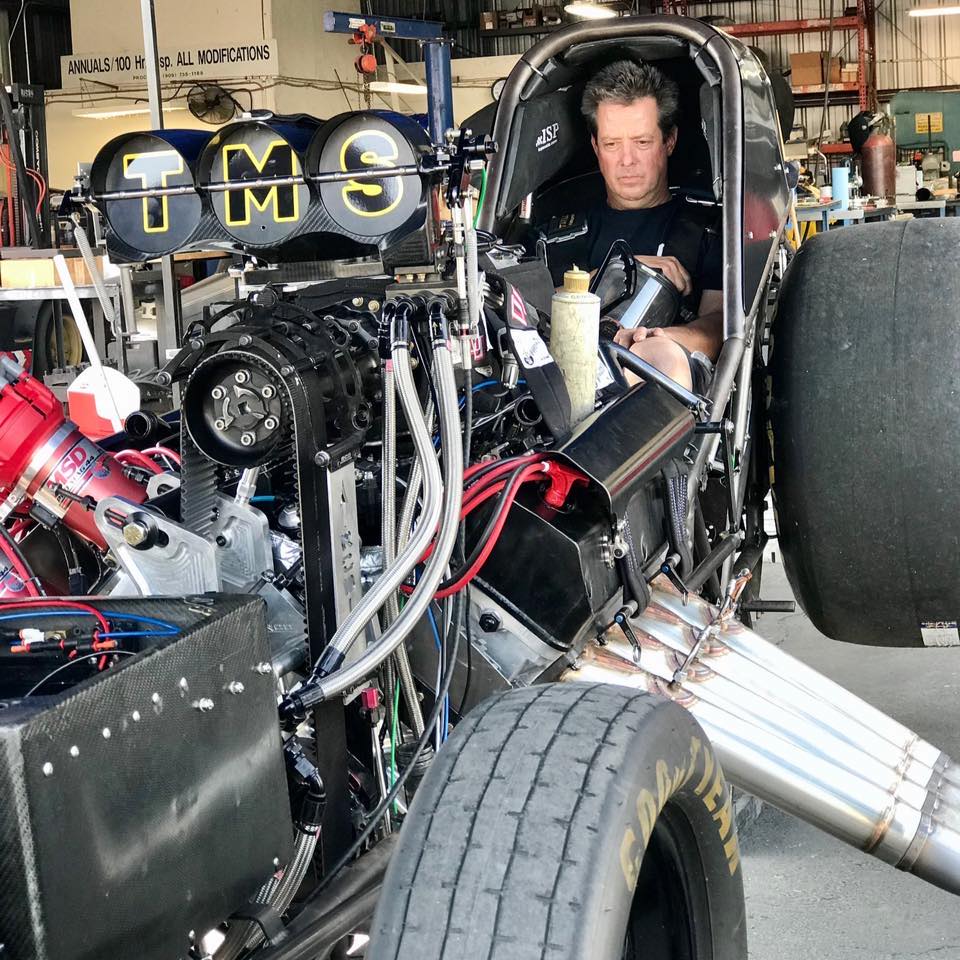 Second-generation Funny Car racer Jason Rupert knew one-hundred percent he wanted to go NHRA Fuel Funny Car racing in the Big Show, and wasn't the least bit intimidated. That is until he looked in the box.

"The Box," as many refer to as the black box, includes a myriad of wires and timers that control a fuel car's engine management program.

"I look in that thing, and I'm like, 'Oh my gosh, what is all that stuff?" Rupert recalled, with a chuckle.

Rupert went into Bakersfield with an unproven Funny Car with the hope of driving the car from start to finish under power.

The power, Rupert added, got his attention early.

"I hadn't been in a car in quite a while, ever since the Nitro Revival," Rupert explained. "So I knew that I was going to have to get up to speed. The first time we finally got the thing ready to run, and it was getting dark, getting cold. I got in the car, and the seatbelts weren't adjusted quite properly, and the first time I hit the gas, it was in between daylight and darkness.

I got in the thing, did the burnout, and backed up. When it rolled up and pre-staged and staged, the seatbelts were too long. I hit the gas, and it shoved me up in the roll cage so hard that it pushed my head into my helmet. And I'm sitting there thinking to myself, "I don't know if I like this or not." 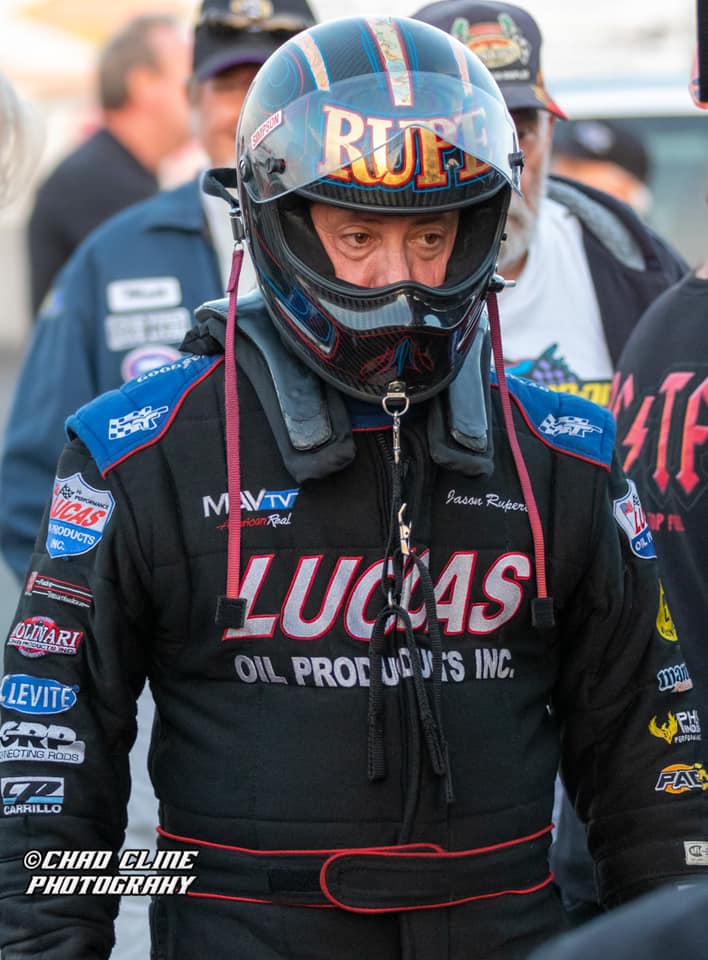 Rupert might have lost his sense of gravity in the car, but the Mustang flopper went straight.

West couldn't make it for the first attempt, but Densham was there to assist Rupert. With the belts fixed, and West on hand, the multi-time AA?FC champion made a run to the 400-foot mark, carding a .928 60-foot time.

"I'll tell you one thing, when you stand on the gas with one of them damn things, you better be committed," Rupert added.

For clarification, Rupert's use of the wordcommitted meant to hold on. The first experience left him feeling a measure of flirting on the side of insanity.

"I've driven some fast stuff, but I've never driven anything like that before," Rupert explained. "I mean, that thing is fast man."

Rupert is no stranger to fuel racing as he has multiple Nostalgia Funny Car titles while racing the NHRA Heritage Series and the short-lived IHRA AA/FC tour.

"It has a whole different sound," Rupert said. "It has a whole different feel. We had some problems with the clutch linkage. It was hard to hold the pedal in, but I'm sitting there; I'm so used to the cackle of a nostalgic car, they sound, they bang in the pipes, and this thing's more muffled because it's got so much fuel going through it. I mean, you can tell just by sitting in it that the thing is just, it's a beast.

"I feel pretty comfortable in an alcohol or nostalgia car, but when I got into this thing, I wasn't afraid, but you could tell. You have to give them all respect, but this darn thing. I mean, this thing, it's little things that can cause big problems."

Rupert confirmed he is also getting technical support from Don Schumacher Racing.

Rupert has not completed the licensing process and needs to make a full pull under 4.5-seconds and at over 260 miles per hour.

"If we wouldn't have had problems with the clutch on Saturday, we might've been able to get a run or two more," Rupert explained. "But it was more important for us to fix the problems and make sure that everything was right. So I basically needed to go, and I plan on going out a couple of times before Pomona anyways. Not only do I need some seat time, but we need practice on servicing the thing and getting up to par there, to be able to do it fast enough."