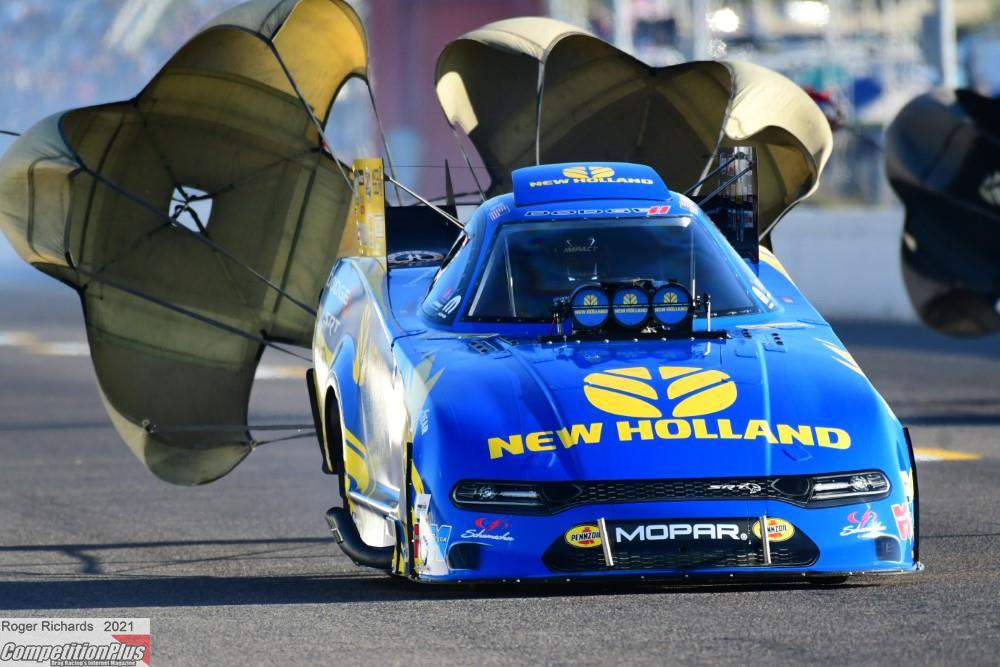 If only Matt Hagan could have seen from the outside of the car the show he and Ron Capps put on for the race fans at World Wide Technology Raceway during qualifying for the NHRA Midwest Nationals.

"[Crewchief] Dickie Venables is throwing down. I just can't say enough about my team; Mike Knudsen and Alex Conway," an enthusiastic Hagan said. "Those guys have got this car on a string, and they're just doing such a great job of scooping up bonus points."

For Hagan, he is where he wants to be at this part of the season. Not necessarily in second place, but chock full of momentum with five races (including Sunday's eliminations) remaining in the run for the championship.

"I think that all in all our confidence as a team is coming around and I think that every run that Dickie makes, he gets better," Hagan said. "He told me up in the lounge the other day, 'We're going to be aggressive and we're going to scoop up these points."

"It's exactly what he's doing. So it makes me feel confident in just what he's doing and it kind of builds my confidence as a driver up there on the starting line and different things like that. But at the end of the day, we got a car that can win this championship without a doubt in my mind. I've won three championships, runner-ed up twice, and I know what it's like to be there and I know what it's like when things start clicking and things start really coming together."

Saturday's moon shot for Hagan earned him a free ride in Sunday's first round of eliminations while most of his Countdown counterparts are racing one another. For Hagan, a bye run isn't just a win - it's 20 free points in his account. It's also a tough battle for second round.

"t the end of the day, number one's not always the greatest place to be," Hagan admitted. "You got to run a eight, nine car that second round or whatever it may be. And those cars always run good and they're tough. I've always done well out of the two, three spot for some reason. And it seems like the ladder looks better a lot of times like that. But Hey, Dickie's running strong. We're going to take those points and we're going to take that number one spot."

Hagan knows if he's to win this season's championship, it will take his greatest effort ever.

"I really truly get excited in the race car when we have moments like this, when you get a chance to step up and you know your crew chief's going to go try to go low," Hagan said. "It's like, you get a chance to make some history and you get a chance to rise to the occasion. That's what excites me about it. It's not a fear thing, or, I'm going to mess this up. It's almost like, 'Give me the ball coach."

"I think that's a mentality you have to have to win championships. You can be nervous and I've seen guys puke in trash cans and all kinds of stuff, but it just doesn't go over well. You just got to believe in your ability and your confidence and your team and it will all fall together."