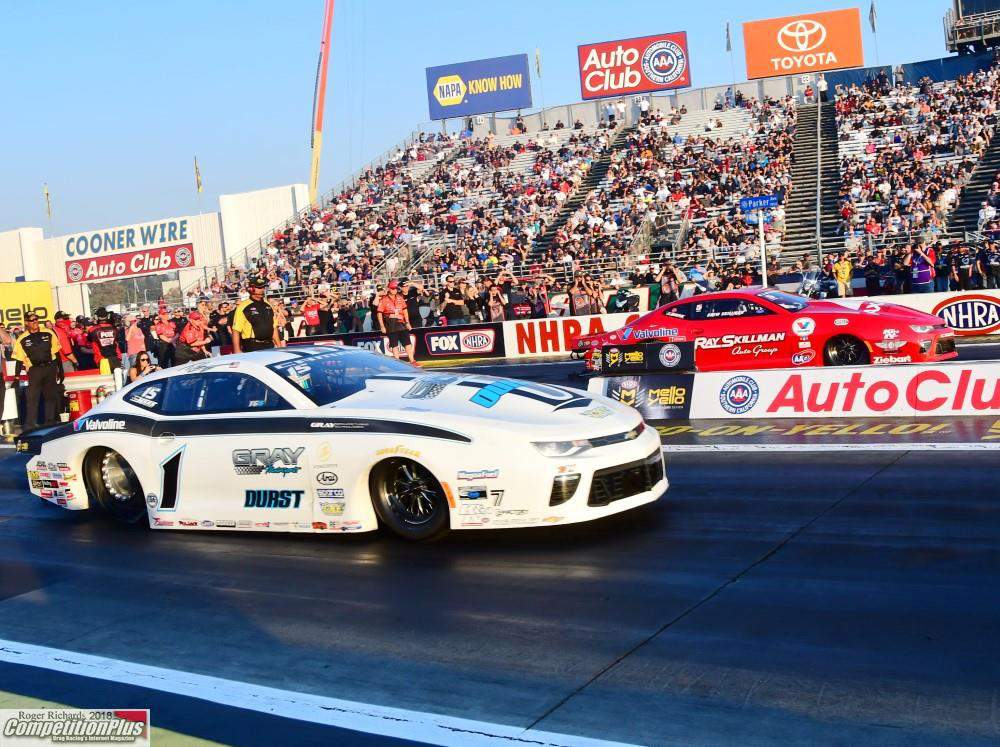 You couldn’t have scripted a better ending to a season than the one Tanner Gray enjoyed on Sunday.

At just 19 years of age, Gray wrapped up his sophomore season behind the wheel in NHRA’s factory hot rod category with a perfect finish, winning the race and ultimately the championship just one year removed from winning Rookie of the Year honors Sunday at the 54th annual Auto Club NHRA Finals at Auto Club Raceway at Pomona. 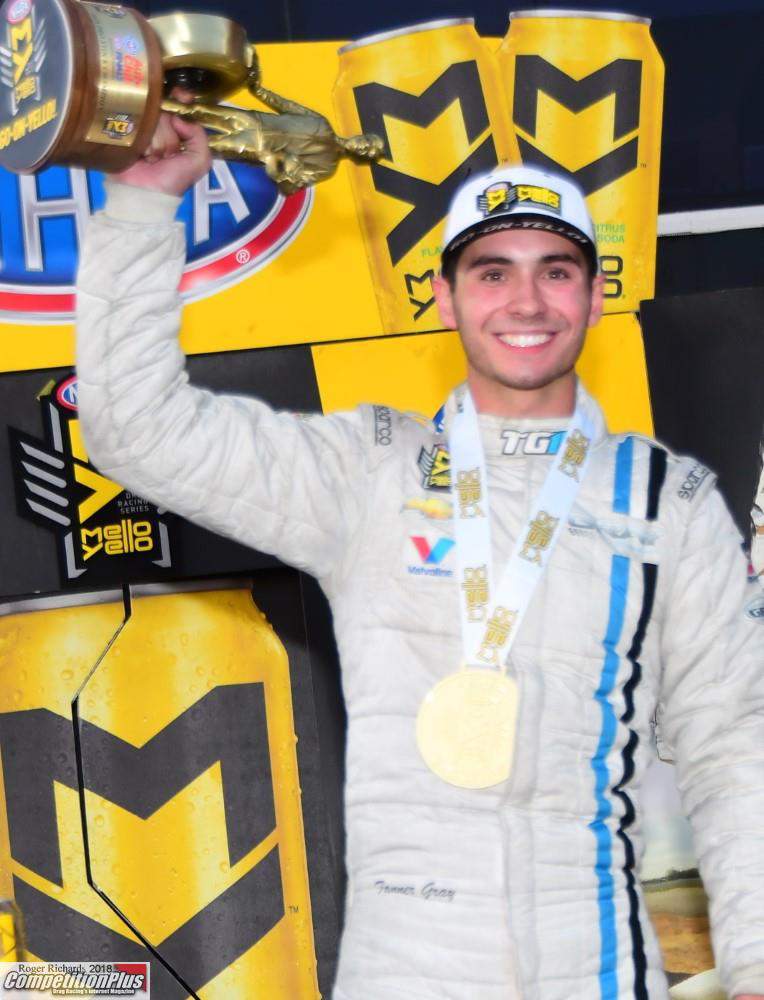 Gray followed up his sensational rookie campaign with an eight-win season culminating with four final rounds in the season’s final six races to earn the first championship for Gray and the Gray Motorsports team. And, with no pressure on the team after securing the title following qualifying on Saturday, Gray went out and capped the near-perfect weekend with a win, the 13th of his career.

“I think for me, I just had no pressure. This was probably the most relaxed Sunday I have had ever,” Gray said. “Even when you are not in the Countdown and you are just racing in the regular season, you still have that pressure because you want to win. For me, coming in here, it was all about trying to enjoy the moment. We wrapped up the championship in qualifying, so I just wanted to enjoy it and not get too wrapped up in winning or losing. We had already won seven races and that is really good and, while we obviously wanted to win more, at the same time I just wanted to enjoy the time with those guys and make the most out of it. Obviously winning the championship and winning the race just added to that.”

Gray capped the 2018 season with a win over Drew Skillman in the finals Sunday in Pomona, easily cruising to the victory after Skillman lit the red bulb by -.002. Gray, known for his lighting-quick reaction times, had a .010 light in the final and ran a 6.519-second pass at 211.86 mph in the Gray Motorsports Valvoline Chevrolet Camaro to pick up the win.

“That was the goal. Obviously we didn’t get that done, but we got six of them and missed the final one by a thou. I told Dave (Connolly) before we went up there, win or lose, I just want to be double-zero,” Gray said. “It was a really good weekend. I love this track as far as reaction times go. For whatever reason, I am just really good here. The way we setup the clutch is exactly how I want the pedal. I feel like when I am sitting up there I am looking at a practice tree.

“I feel like I can move around and do whatever I want with the clutch and I don’t know what happened when I missed it. The sun was sitting awkward in the tree, but I had already seen that look in qualifying. Either way, we still came out with the win.”

Gray added wins over Jason Line, Erica Enders and Shane Gray to record his eighth victory of the year. Enders gave Gray his closest battle of the afternoon in round two, with Gray earning the holeshot win with a 6.563 to a 6.562, earning the advantage with a dead-on .003 light. In the semifinal, Line tried to get the best of his opponent with a perfect light, but shook the tires and had to abort the run.

Skillman, in his third final round of the year, had wins over Jeg Coughlin, Greg Anderson and Alan Prusiensky.

Gray finishes the year with an impressive run that saw he and his Gray Motorsports team take three wins in the Countdown and seven of the final 15 races of the year. The team started slow with a couple of early exits in the season’s first few races, but gradually found its footing as the season progressed. The team took the lead for good following a huge victory at the Chevrolet Performance U.S. Nationals and never looked back.

“Even after we won Gainesville, I feel like we still struggled a little bit,” Gray said. “At the beginning of the season we tested so much before we went to Pomona and we even stayed after Pomona and tested and then we stayed after Phoenix and tested and we were testing in between races during the summer. That is when it is long. All of those back-to-back races and then you are testing in the middle of the week and it just makes it tough.

“To finally see all that pay off there toward the middle of the season was awesome. There for a while we were doing all of this work and not seeing the results that we wanted. For whatever reason, everything switched and we started knocking out some wins and then coming into the Countdown we knew what we had to do. We knew how we had to race the car from the mistakes that we made last year and Dave (Connolly) and all of those guys did it. I was just the monkey behind the wheel.”

And it is Connolly that Gray credits most with his win. After coming up short of the title during his rookie campaign, Connolly helped guide Gray both on the track and off of it, helping keep his emotions in check and focused on the job at hand.

“I’m obviously a pretty emotional guy. I get down on myself and stress about the little things and that is one of the things he has helped me out with a lot is letting it go, moving on, and going up there and focusing on the next run,” Gray said. “I think that really came into effect at Charlotte for me. I ripped the tree all day and then I go up there against Jason (Line) and, for whatever reason, I am 44 and I was pretty mad about that. He sat me down and said, ‘look dude, we’ve got another race to go and we can’t do this if you are all spun out. Get your head together and move on. That really helped put things into perspective.”

Gray concludes, not only the season, but potentially his NHRA career with Sunday’s championship, as Gray looks to make the jump to NASCAR’s K&N East Series in 2019 and beyond.

And if indeed this was the final time NHRA saw Gray behind the wheel, it was the perfect ending to a wonderful season for one of NHRA’s brightest young talents.