FORCE SURPRISES WITH TOP FUEL NO. 1 ON FINAL PASS 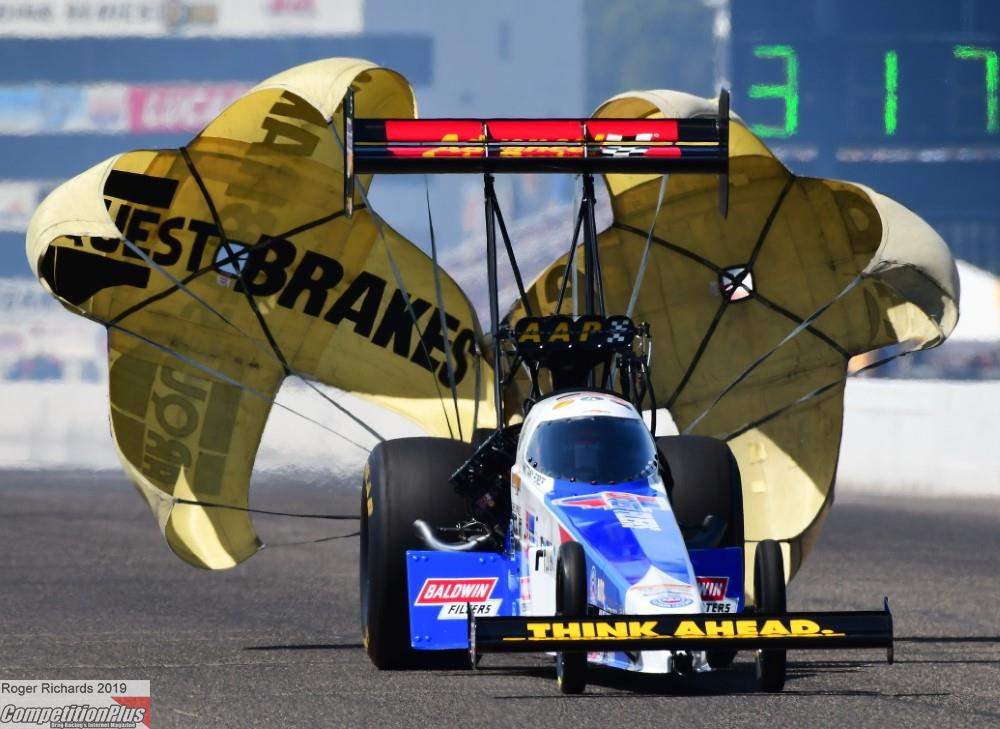 It is safe to say few saw that one coming.

After day one in Minnesota, Steve Torrence looked to have a lock on yet another Top Fuel pole.

He was the quickest car on Friday with a pass that looked relatively insurmountable considering the conditions and the ensuing runs in the class.

But in drag racing, anything can happen, a point proven once again Saturday night.

Brittany Force and world-renowned crew chiefs David Grubnic and Mac Savage blasted from 10th to first in the final qualifying session in the Advance Auto Parts dragster, giving her her fifth No. 1 of the season and the 15th of her career Saturday at the 38th annual Lucas Oil NHRA Nationals at Brainerd International Raceway.

“It was a clean run all the way down there and that put us No. 1 and we are very happy with that,” Force said. “David Grubnic said on this last run we are safe in the field and he was going to push to see if we could move up and he moved us up quite a bit. We are very excited about that and it puts overall good energy in our pit and confidence going into race day tomorrow.”

With few able to improve on their times from Friday, the field appeared locked entering Saturday’s fourth and final session. Going up to the line, Force was informed that she would be running her teammate and most recent race winner Austin Prock in round one on Sunday and the team hoped to see some movement on the ladder to avoid that matchup.

“Right before we started the car I heard them say that we would have each other first round,” Force said. “That was a bummer and I thought that we have to step it up. But with Grubnic and Mac Savage, I knew we were capable of doing it.”

In the fifth pairing of the session, Force put together her best run of the weekend, rocketing to the top of the charts and holding on as no other cars were able to improve on their times. While it was a surprise to some, with an all-star team in her corner, Force admitted that little surprises her anymore.

“I love working with (Grubnic) and Mac Savage. (Grubnic) has been behind the wheel in one of these things so he understands the stress. He understands the pressure. He understands exactly what you feel when you pull up to the line every time,” Force said. “To be able to sit down and have a conversation with him when I come back to the pits and I’ve screwed up or whatever, to talk to him knowing he has been there, is really cool. It is great to be able to rely on him.

“I have the greatest team out there and I know that we are capable of doing anything. Grubnic told me the number he wanted to run before (that pass) and I knew it was going to be pushing hard if we could make it down there and it did just that.”

No longer having to face her teammate in round one, Force will match up with Chris Karamesines in the opening session on Sunday as she seeks her second win of the season.

“The No. 1 puts us in the best spot we can be in. It feels good to go into race day with that,” Force said. “The last couple weekends we have struggled a little bit and haven’t been exactly where we wanted to be. Taking the No. 1 spot, we get some points and we have the best start for tomorrow.”