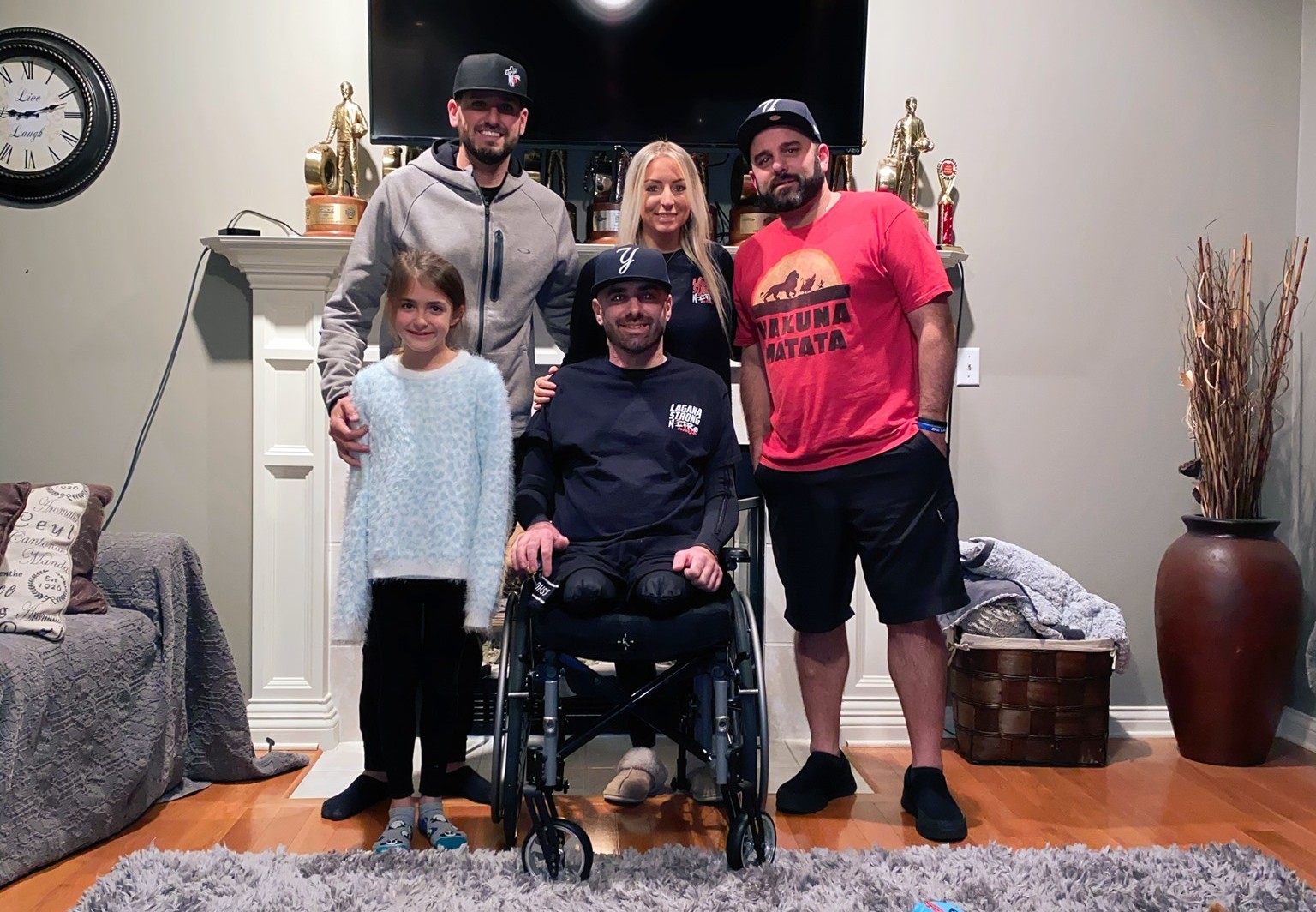 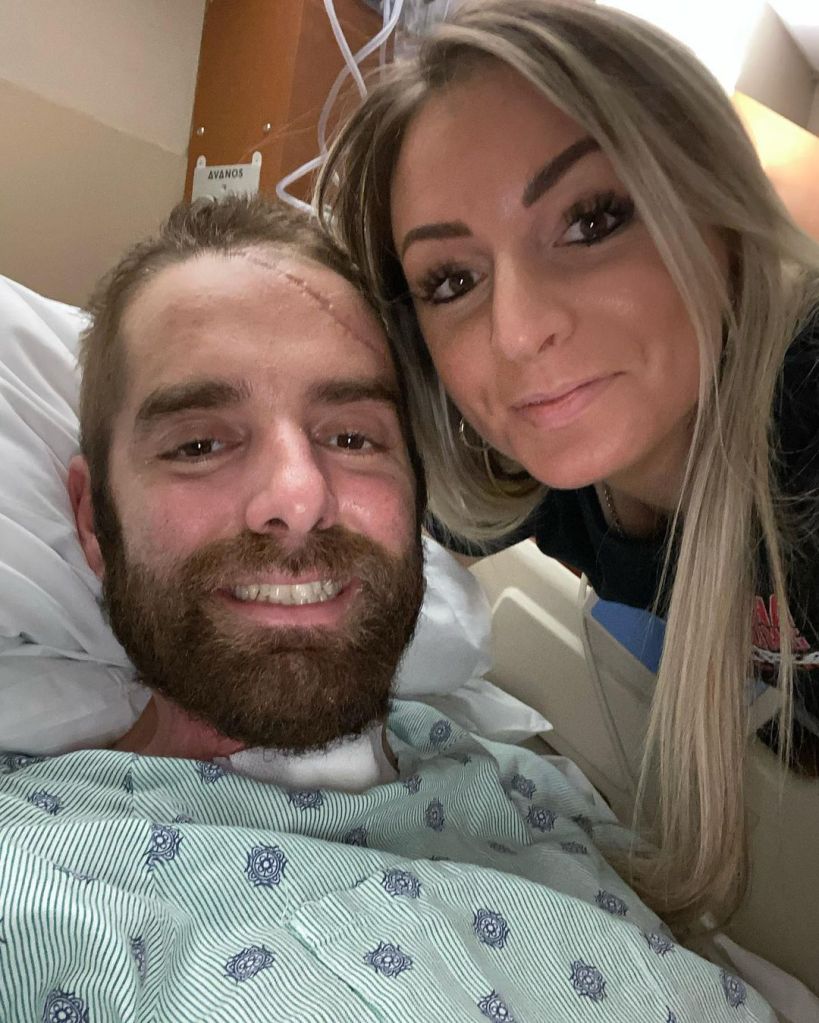 Where does one begin to put their life back together following a tragedy?

This was the pressing question that ran through Dom Lagana's mind as he lay in the hospital bed following an Aug. 9 highway accident that left him broken, burned and with both legs amputated at the knees.

Lagana was injured when the high-horsepower, 1957 Chevy he was driving late in the evening after leaving Lucas Oil Raceway Park, ran off the road, and struck a utility pole.  Car owner Richie Crampton and Jake Sanders, passengers in the car, suffered undisclosed injuries.

Lagana, who comes from a drag racing family, was raised to never take life or anything for granted, said something so simple that he longed for. That mindset put into motion his recovery and healing process.

"My starting point was to be able to get some independence back," said Lagana, who spent 103 days confined to a hospital bed. "When I went to a second hospital just to heal up, it was tough because they had to pick you up out of bed in a sheet to put you in a wheelchair or a stretcher.

"The first thing I wanted to do was sleep in my own bed and have a measure of freedom."

Today, he's back at the Torrence Racing shop in Brownsburg, Ind., performing odd jobs on the workbench.

Lagana's also getting some homecooked meals and some quality take-out.

"We had some chicken cutlet wraps the other day. That was pretty good," Lagana said. "We're hard on Italian food. There's one good Italian place around here that we always go for lunch, so we've been ordering out from there a lot, too."

The meals are a luxury, but even from the early days of his recovery, he had a strong belief he would be around to enjoy such things despite the daunting odds he faced.

Lagana, who lost his mother early in life to cancer, and later his father, has always understood life is a measure of peaks and valleys. Throughout both, he chose to see them as learning opportunities.

"We've been fortunate enough to live a great life so far," he said, "but we've seen a lot of bad stuff, and it's definitely inspired me to never take any day for granted. Even before the accident, I have always been thankful for just waking up and being healthy. Having those around you have the same opportunity was, and is, always a blessing to me. 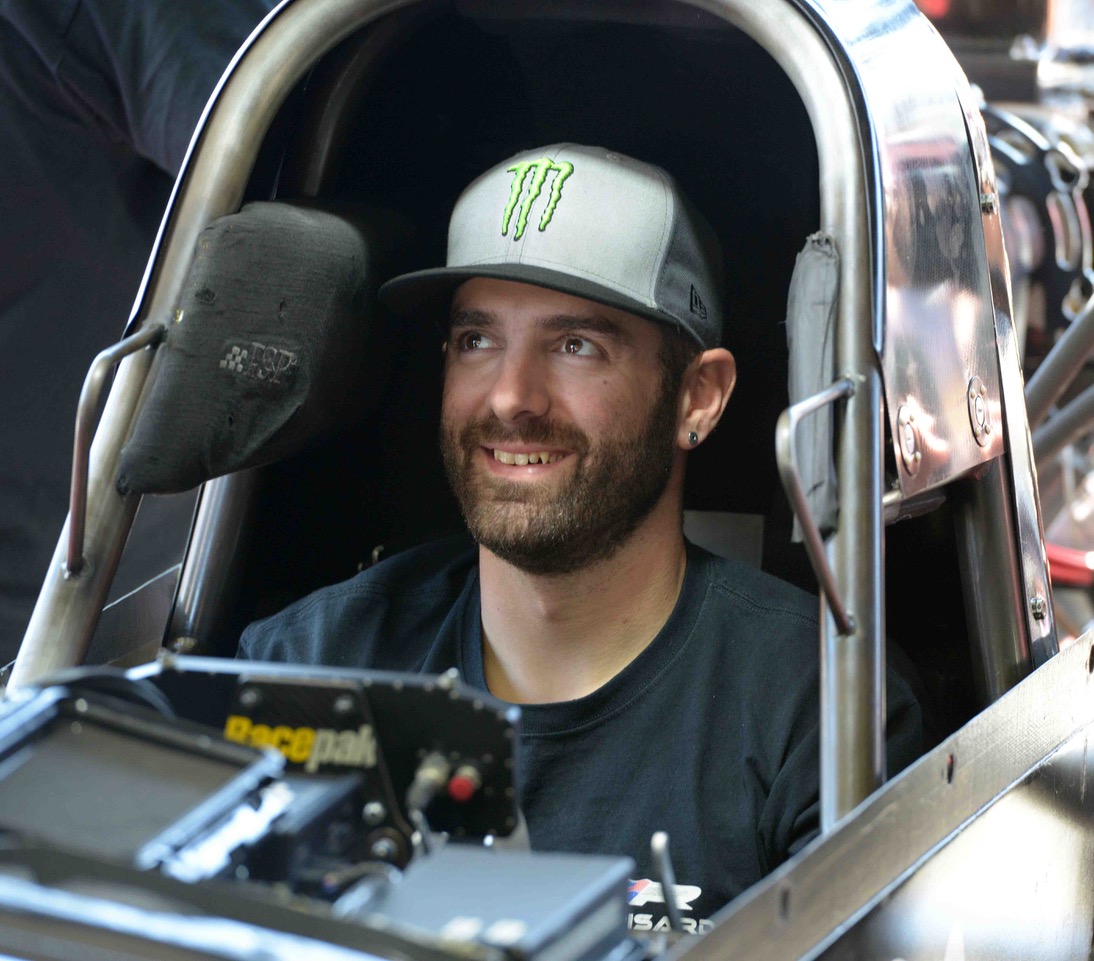 "The fact that we've gotten to drag race and to be able to do that for life for a while has been awesome, so we never took anything for granted, and I never did. I always knew that in an instant, anything could be taken from you."

On July 10, 1998, Lagana had his world turned upside down when his brother Bobby was involved in a horrific Top Fuel crash at the IHRA Empire Nationals. The combination of a hung throttle and parachute failure sent him off the top end of New York International Raceway. He suffered several injuries, including a thumb amputation.

Bobby was critically injured, and Dom ran all the way from the starting line to be at his older brother's side.

"It was kind of like an airplane crash," he said, "and I thought the worst because it looked just so bad."

Why is recounting the accident important to the younger Lagana?

Lagana said he saw first-hand the meaning of #laganastrong long before it became the mantra for his recovery.

"Watching him heal up served as a wake-up call, like where you realize first-hand, 'Man, this stuff is dangerous,'" Lagana said. "It reminds you that life is fragile.

"But to watch him heal and have the strength to get back to racing was pretty inspiring back then, like my mom fighting cancer."

Now the ball is in Lagana's court.

"I've gotten to see it now with my own two eyes how having a huge support system means a lot for a person lying in the hospital such as I was," he said.

Lagana doesn't hide the fact he questioned why this happened.

"I've had a couple of moments where I looked up and asked, 'Why did this happen to me?' " Lagana admitted. "Unfortunately, life just throws curveballs at you and anything could happen. And I never took anything for granted. But just at those moments when you ask why, you also have to be thankful.

"I am thankful to be in the shape that I'm in. I hit my head really hard. I had a bad brain injury, and that could have gone either way. That was just the Lord looking after me and my body fighting back because it didn't want to give up -- so definitely thankful for stuff like that. It could always be worse. My injuries could have been way, way worse for the situation I was in."

Lagana credits a strong supporting system he didn't even realize existed when he was in a coma.

"All the doctors that have treated me throughout this entire ordeal, especially at the Eskenazi Hospital in Indianapolis, they saved my life, 100%," Lagana said. "I caught pneumonia in the hospital, and they fought for me because I was in a coma. My body could fight for myself, but I couldn't mentally fight for myself. And the doctors and nurses, they are unbelievable. I still see them in the check-ups, and they make an investment in people's lives.

"They enjoyed seeing me heal up and be happy and stuff like that. And then the therapists at the rehab place, they brought me back to being able to be independent. They're all amazing people, and I cannot thank every single one of them enough for trying to make me live and have a good quality of life." 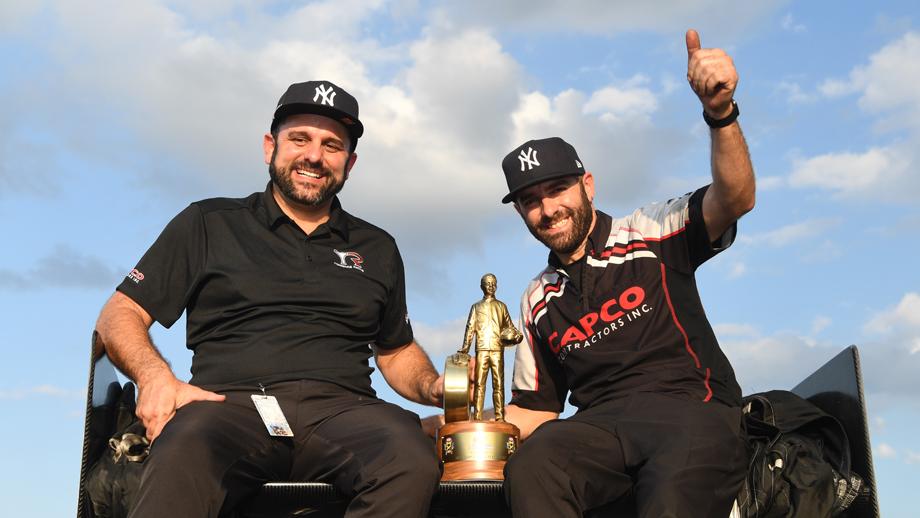 Bobby and Sarah took extraordinary measures to keep Lagana moving on a trajectory towards full recovery.

"Bobby was in the hospital, and he was also in a championship battle and still texted me all the time or visited me all the time and supported me and gave me goals, 'Hey, it's going to be all right. We'll get through this,' " Lagana said. "Without his support and the team's, I definitely wouldn't be in the shape I am in.

"And Sarah ... I really love this person, and I want to give her as good of a life as I possibly can. The love and support that she's showing me now has gone way beyond just getting married, stuff like that," he added. "She's been, as they say, she's my ride-or-die girl. She's unbelievable. Just coming in the hospital, praying for me when I was in a coma, playing music in my ears, calling people to be able to FaceTime with me even when I was in a coma. And all that stuff helped. And just inspiring every day. When I had the bad days, when I was down on myself, she'd give me a lot of motivation. And I love her to death, and I can't thank her enough."

Additionally, Lagana drew a substantial measure of inspiration from Dan Parker, the former Pro Modified racer who suffered a head injury in a racing accident that eventually cost him his eyesight. Parker later returned to work in a machine shop and has secured records while driving at Bonneville in both automobiles and motorcycles.

"I know what guys like Dan Parker and people in the race family that have gone through with terrible injuries," Lagana said. "Talking to these guys, it was very inspiring and helped my mental state a lot. That just motivates me more to, when I'm able to at some point in my life, be able to speak to kids or adults or anybody who is going through something severe like I've gone through and just help them out. I know for sure, without the help and inspiration of guys like Dan Parker reaching out -- that (stuff) really, really hits your heart tremendous and excellent and really good that, 'Hey, this person has gone through the same tragedy and they've fought back and made it back to a little bit of normalcy.' 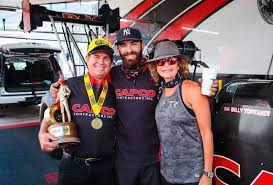 "It's mind-blowing. But I definitely would like to, at some point, be able to help one person or hundreds of people. I'll do whatever I can just when I'm able to, to help people."

Being a part of the Torrence Racing family has been a Godsend too. For him, the Torrences -- Billy, "Mama Kay," and son Steve, the NHRA Top Fuel champion in 2018-20, are much more than the team's benefactors. In his eyes, they're part of his family.

Lagana doesn't hesitate to point out the act of wrapping Steve's car to mimic his Nitro Ninja livery was the first boost of motivation in his recovery.

"For Steve, Billy and Mama Kay to allow something like that or do something like that just shows what kind of people they are," Lagana said. "That's a big deal to run another paint scheme or a sticker scheme on it at the biggest race of the year. And they didn't bat an eye. And it's unbelievable, the support, what that did for me.

"I've been around drag racing my entire life from when I was a baby, and you always know that the drag race family sticks together. We've seen it with other guys that have unfortunately gone through tragedies or injuries or stuff," Lagana said. "I've always been a supporter of anybody that needed it. You know it's there, and you know everybody sticks together. But once I woke up and was out of a coma, my fiance showed me pictures of people wearing the T-shirts.

'And I started watching the races on the live feed. It was unbelievable. The drag racing community really came out and surrounded me spiritually and just tried to help me heal as much as they can. And I'd want to tell people wearing the T-shirts, wearing the bracelets, and having stickers on race cars, it may only be a sticker and a T-shirt or a bracelet, but it really, honestly helped me heal up and helped me a lot in the hospital. It was inspiring to see that, and it gave me more of a fight to heal up and get better.

"That kind of support, I'll be eternally grateful for everybody that supported and took time out of their lives to get T-shirts and wear them. And a lot of the teams wore all the T-shirts on one of the qualifying rounds at the Indy race. I dare to say, without support like that too, I definitely wouldn't have come out of this as good as I had, either."

Lagana realizes he can never thank each one who offered their support personally but would like to speak to the community as a whole.

"I would just say (to) love your friends and family," Lagana said. "We all know tomorrow's never guaranteed; life could change in an instant. Support your family, support your friends, and just try to try to enjoy yourself because the reason we live the lives we do is to be able to look back on those memories and smile and feel good inside. That's what drives me to live a good life and be a good person and stuff like that. We never know what the heck is around the corner and what kind of curveball life is going to throw at you."

A trust fund has been set up for Lagana to help dray the massive medical and other living expenses.

Checks can be made out to Robert Lagana. then write the account No. in the memo.