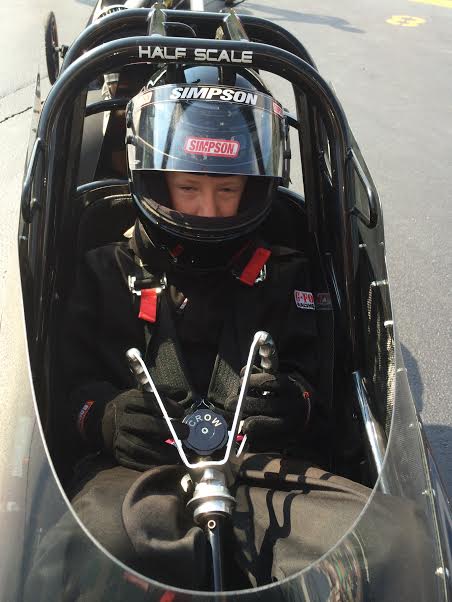 “We went last month to Frank Hawley’s Drag Racing School (in Gainesville, Fla.) and we got halfway through it, and it got rained out,” Bob said. “We are going back in September to finish it up. We also went last year, and he now has nine passes in Hawley’s Alcohol Funny Car, and we are going back in September, and we will have him make six more passes and hopefully, he will finish up things then.”

The younger Bode is 17, and he will turn 18 in April of next year. He’s presently competing in the Junior Dragster class and winning his share of races.

“The way the rules are and the way we understand it, he could start testing in January because he would be 18 during the (2020) season,” Bob said. “Once he is 18, if he has his alcohol license, we could let him start making hits in my car and see how he does. If he gets good enough and makes the passes he needs we could let him try and qualify my nitro car next year sometime if everything goes the way it is supposed to. A lot of stuff has to happen, but it should be good.”

The elder Bode said his son has expedited his learning curve this season by warming up his nitro Funny Car at the races the team has attended at Charlotte, N.C., Chicago, and Norwalk.

“He gets in it and warms it up and he actually does a better job than I do now,” Bob said.

Prior to this season, Bode’s team joined forces with standout veteran driver Tim Wilkerson. The Ford Mustang Bode is campaigning is a car he bought from Wilkerson last year. Bode drove the car in the final four races he ran in 2018.

According to Bob, having Wilkerson onboard has really benefited his son.

“Tim works really good with Bobby on the tune-up,” Bob said. “Bobby is very literate with all the digital stuff and new technology. Bobby sits up at the starting line and changes the clutch flows just before we go and watches the weather and we never did that stuff before. Tim told us we needed to change, or our car was never going to improve.”

Bob knows having his son understand his Funny Car inside and out will make him a better driver.

“It helps so much because if something is not right, he knows what the data is and he knows what the car is like,” Bob said. “That’s a good combination. He also keeps really good records. When I was doing it, I was a little shoddy and he has all the computer stuff down and keeps really good records. That allows us to go back and see what we are doing, and it has helped us a bunch.”

Bob will have no qualms giving up the driver’s seat when his son’s ready to take the wheel. 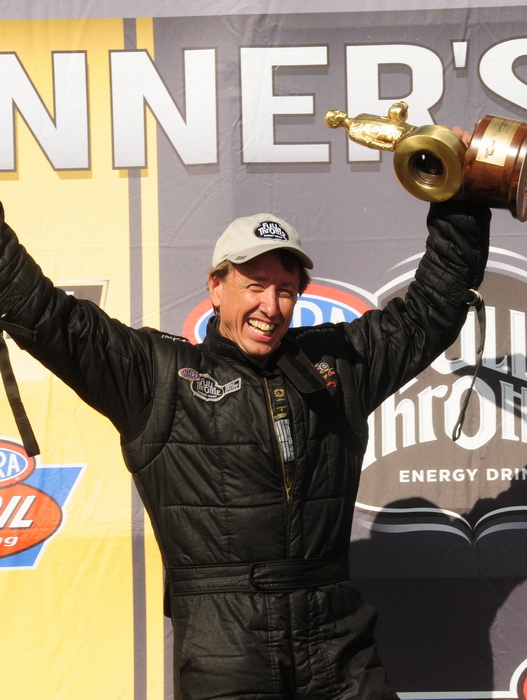 “The sport is all about the young kids coming up through the Junior stuff and getting us older guys moving along and getting the young guys back in the sport,” Bob said. “I have been doing this (driving) for 19 seasons now and I will keep driving if Bobby doesn’t like it, but it would be really exciting to stand there and watch the new young guys like Bobby coming into the sport. I remember 19 years ago, Brainerd (Minn.) was the first place I took my car after I got my license and it was so exciting just to be able to go do it. We didn’t care if we won or not, we just wanted to get the car out there and I know Bobby would be the same way.

“Bobby has a lot of talent and he’s hard on me because he always has great lights. This last weekend he had a perfect light (in his Junior Dragster). He tells me, ‘Dad you need to get your lights better.’ I’m getting them as good as I can and if we can get him to drive the car, I know we will have a kid who will have some pretty good reaction times. It will be a lot of fun.”

Bob said the next race he will compete at will be the Lucas Oil NHRA Nationals, Aug. 15-18 in Brainerd, Minn. The site of his lone national event win in 2010. His improbable run culminated with him defeating Jack Beckman out of the Don Schumacher Racing stable in the finals.

“Tim is helping us so much, and we are upgrading so much stuff,” Bob said. “We have new blower cases and we have new rocker arms. He has got us out of all our old stuff that was causing trouble and now we have to get all the upgrades to match the other stuff we are doing and if it ever balances it will be a fast race car.”

Bob would love nothing more than to have that balance come at Brainerd.

“Every time we go to Brainerd it is like we are going to our home track,” he said. “There are so many fun people there. A funny story, after we won there, we were so excited and Jeff Arend and Del Worsham came and grabbed me and our crew and put us on a golf cart. They took us out there (to the Zoo at the race track) and we sat around a big bonfire and everybody was partying and having a good time. We were well-liked when we were wandering around out there. Those guys know how to have fun. It would be pretty amazing if I could win again and go back there.”