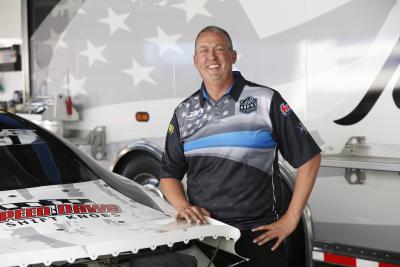 Bo Butner, the versatile past NHRA Pro Stock champion, has raced several sportsman division successfully, will undertake the challenge of another professional division as he subs for Rickie Smith. Smith recently underwent back surgery.

Butner says filling in for a legend like Rickie Smith is a great opportunity.

"I've got a lot of respect for Rickie Smith, and he's always been very nice to us," Butner said. "He's a hard worker, and he always got good stuff. He does a lot with what he's got, and he's got great stuff, but he does this for a living. He called says, "Hey, you're a Strutmaster driver, I'm one too, and it might help us both.

"We put together this one-time deal, and I'm sure he'll be back in the car pretty quick, but it's going to be fun."

"First time ever," Butner admitted. "The only thing I drove was Harry's car to get my license in. Same type transmission and stuff, so we'll see what happens."

And for at least one weekend, Butner will be channelling his inner Scotty Cannon; admittedly his hero for doorslammer racing growing up.

"I'd like to see ol' Scotty one of these days," Butner said. "I know he's out hiding, probably fishing or on a boat. It's been a long time. He was a bad man back then. I'm sure he still is."