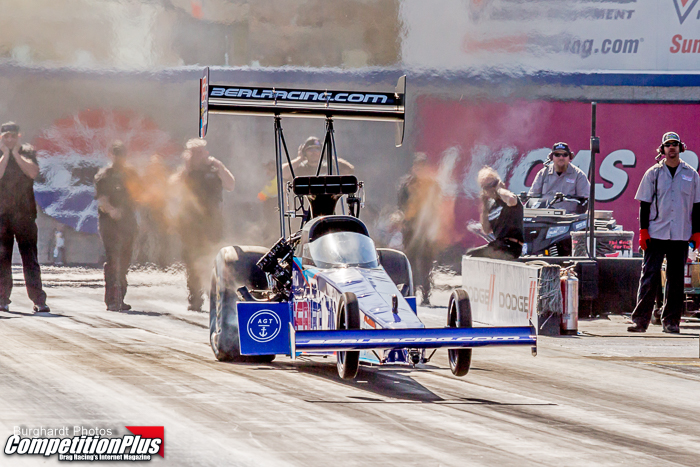 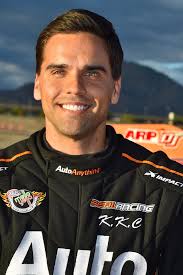 Billy Torrence is 61 years old. Brandon Welch is 36. But Torrence is a fellow Top Fuel team owner and driver Welch can relate to, despite the fact Torrence has qualified for 47 races and so far Welch could count his passes down the racetrack in a dragster on one hand.

Both are juggling a work-race-family balance, and both have a firm grasp on financial matters with and separate from their race cars. Torrence’s expertise is in the oil-and-gas pipeline construction and maintenance business in Texas; Welch, a San Diego native, is entrenched in marketing and in the financial world of securities and real-estate investments.

Before Welch embarked on his NHRA career, which began in 2015 in grandfather Chuck Beal’s Funny Car, he said, “Racing is a business, and we are marketing people first. In order to pay for these things, we have to understand marketing language and marketing strategy.”

From Torrence, Welch (who is progressing through his cross-licensing procedure from Funny Car to Top Fuel) has learned racing strategy that he has integrated into his complete business platform.

“In Top Fuel especially,” Welch said, “the business model has been proven by Billy Torrence and by the Vandergriff cars that you could have a very competitive car that doesn’t have to go to every race.”

Not that he set out to revolutionize the nitro-class approach when he began racing in the Top Fuel class in 2013, but Billy Torrence has done just that in 2019.

He competed in only 10 of the 18 “regular- season” races, and in those 10 appearances he won twice (at Phoenix and Sonoma) and was runner-up twice (Topeka and Indianapolis). Torrence qualified for the Countdown to the Championship as the No. 10 and final seed. In the six-race Countdown, he has won twice, at St. Louis and Dallas, and climbed to the No. 4 position in the standings. With one race remaining – one that grants points and a half – he’s only 8 behind the leader (his son, Steve Torrence). So as a part-time racer, the Capco/Torrence Racing Dragster driver has a legitimate shot at winning the series title.

Vandergriff Racing scored the most recent two of its six victories with Blake Alexander in 2018. He competed in only 11 races all season and just seven in the “regular-season.” In his first six starts, Alexander had two victories, a runner-up finish, and two semifinals. With his semifinal performance at Indianapolis, he likely would have made the Countdown, had he not skipped 11 events.

In the Pro Stock Motorcycle class, White Alligator Racing owner-racer Jerry Savoie took off three consecutive midseason races but won the U.S. Nationals to take the No. 5 Countdown berth. And in the Countdown, Savoie is a two-time winner (at Reading and Dallas).

So the days of charging hard through 18 races to make the six-race title hunt might be gone. Terry McMillen and Scott Palmer, two significantly improving drivers who finally had some Countdown experience under their belts, ran a full “regular season” and failed to qualify for the chase. So did Top Fuel rookie Cameron Ferré. Same for two-time champion Cruz Pedregon, Terry Haddock, and Jim Campbell in Funny Car. The pattern isn’t just in the nitro ranks. In Pro Stock, for example, Fernando Cuadra, Alan Prusiensky, and Kenny Delco were tour faithfuls who didn’t get a shot at the championship.

Welch is crafting his schedule in a realistic way that still allows him to be competitive and offer a marketing partner greater return on an investment. Moreover, that investment promises to be more reasonable than one might have been in previous years.

“I look at this team as I’m building a business, and we’ve invested more than two years now in a top-quality product,” he said. “I consider my mindset and what I bring to the table as part of that product, as well. But you also have to think about it as a business manager and entrepreneur: How do you scale a business comfortably?

“To go out there and run 24 [races] right out of the gate is difficult. But also to be able to say to a sponsor, ‘We’re going to have the parts in the car to run 17 [events], and we believe there could be a Countdown berth in there if we perform well enough and have the opportunity to run the final six,’ that’s a great proposition,” Welch said.

“You don’t have to scale up to that 24-race deal You can run 13 out of the first 18 races or something like that and see how it goes,” he said.

“There’s also an opportunity to bake in performance incentives for a sponsor who’s interested in that – you unlock certain funding when you make the Countdown. I like that idea a lot,” Welch said. “I like not overpromising. I like under-promising and scaling into growing into more. We’re in a position to do that. I have a certain level of comfort in the position I’m in, because I don’t have to ask for $2 million to put out a good product and do right by a sponsor. I’ll scale my operation accordingly.”

Welch never really fretted that his budget needed to be as grand as those of some operations. He’s secure in his method of building his business, and he’s looking for growth potential rather than instant gratification.

“I can sell six races. I can sell eight races. I can sell it, knowing I don’t have to keep the same kind of infrastructure as if I were running 24 races,” he said. “So I can adjust pricing accordingly to make the value, the price point, match the perceived value the sponsor’s getting. I don’t mind that perceived being a little lower than what somebody else is charging. If I can over-deliver on that value, then when we come to renewals, I can scale it up. I can grow. I can prove the value we’re delivering, then scale it up.

“So I’m not always trying to hit a home run. I’m trying to hit singles and doubles. By doing that, we’re in a position at least to stay relevant, stay present, and always keep chasing ‘the bigger fish’ and the full-season deals,” Welch said.

This past Monday, Welch made his first two passes at The Strip at Las Vegas Motor Speedway in the Kalitta Motorsports-built dragster that Richie Crampton used to drive and that Pat Dakin qualified this past weekend at the Dodge Nationals. Welch said the engine was damaged on the second run and that he will “bring the car out one more time between now and Pomona” to complete the final two requirements for completing his cross-over licensing procedure. He said, “The car’s incrementals were very strong, and we’re excited about our potential for 2020.”

In the meantime, until he can hit those home runs, he said his “small-ball” strategy is this: “As a driver, team owner, salesperson, you just go all-out, break a sweat, and do all your publicity and appearances and over-deliver like crazy and hope they see the value.”

If he can do that, he’ll find himself with a season like Billy Torrence is having right now.

Rookie Top Fueler Jordan Vandergriff said, “the biggest thing about my season, tell you the truth” – meaning the hardest thing – is not racing every event on the schedule. He understands why his team isn’t a fulltime team. He knows the business side. #DragRacingNews #NHRA pic.twitter.com/sjOe1lbo5l