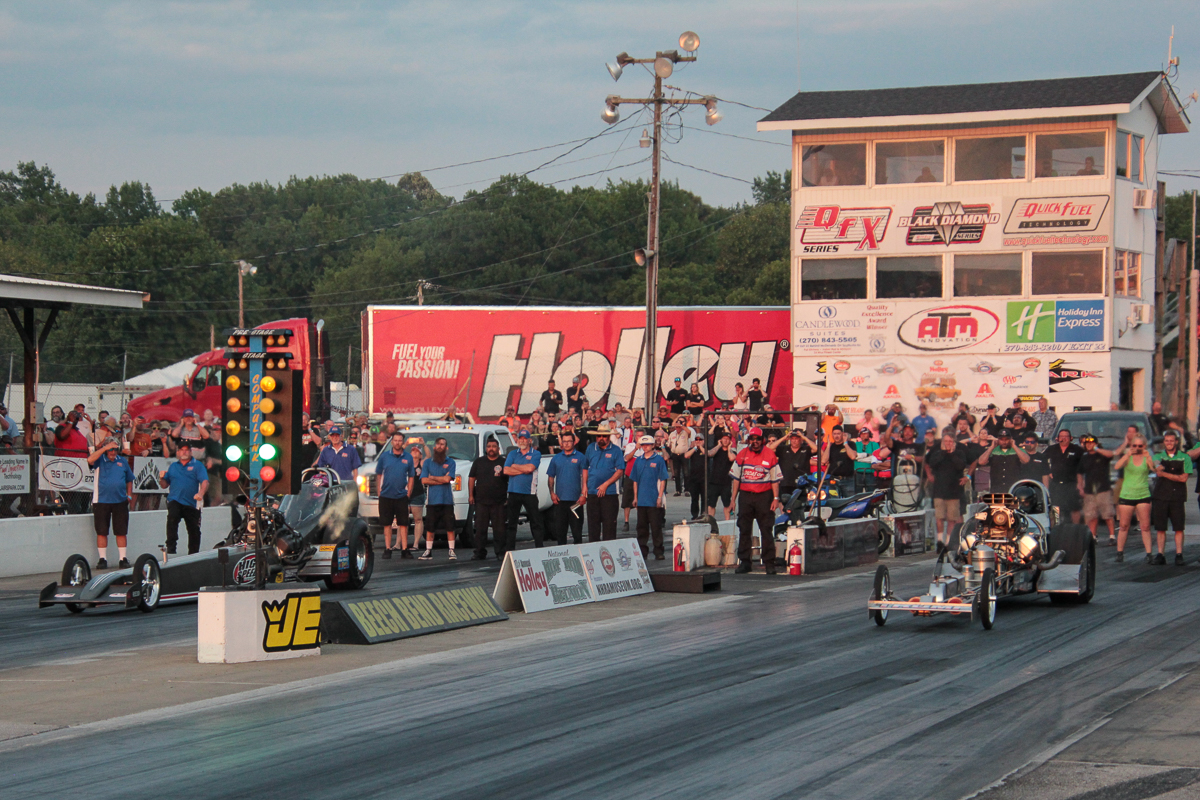 Jeff Arend took home the coveted Wally in the Nostalgia Funny Car category with his run of 5.784-seconds at 243.28 mph. Arend's California Hustler Trans Am was also the top qualifier for the weekend. He defeated Dan Horan Jr. and Eric Stevens on his way to the winners circle.

"We've never been to Bowling Green before. Love the track; it's a great area," said Arend. "The car ran good and Ronnie Swearingen is a good Crew Chief. We have a great team here. We were low E.T. in qualifying. So today we knew if we run the same as we have, we're probably going to do okay and win. I'm really happy we won and got a Wally for Don Nelson (team owner)."

In Nostalgia Top Fuel, Mendy Fry, current world champion and top qualifier for the event, powered to victory in her High Speed Motorsports dragster with a pass of 5.561 at 259.21. It was a side-by-side battle all the way down the track in the final round as Fry defeated Jim Young's run of 5.651 at 262.28.

In the final round, Fry kept her foot in the “High Speed Motorsports” dragster even as her Hemi engine was coming apart.

"I knew it was going to let go at 1000-foot", said Fry. “I was not lifting. I think it pushed the head gasket out -- I was oiled in. I knew I was straight, so I stopped on the track as soon as I could. I could hear him... it's a crazy feeling, knowing something was going wrong and not lifting."

In other categories competing, Rich Krohn won in 6.0 Eliminator, Jeffrey Sanborn won in 7.0 Eliminator and Randall Boles was the winner in 7.5 Eliminator. Dan Dishon captured the win in Competition Eliminator and Jim Hayes emerged victorious in Gas Eliminator. In Modified Eliminator, Greg Carta came away with the win and Jimmy Ray took the top spot in Nostalgia Super Stock. The win was captured by George Warren in Top Stock Eliminator and in Hot Rod Eliminator, Paul Mitchell snagged the victory. Rounding out the day's winners were Herman Hill in Straight Axle and Joe Bush in Geezer Gassers.

In the Axalta Show 'N Shine, the Top 50 cars were honored during the day as they made a celebratory lap down the track. Nine cars received perfect scores in judging. Those entries with perfect scores were:

As is Hot Rod Reunion tradition, the ever-popular Cacklefest fired to life to close out the event. The sounds of American muscle reverberated under the covered grandstands as vintage cackle cars roared to life delighting hoards of fans.

The Hot Rod Reunions are produced by the NHRA Motorsports Museum and benefit the facility located in Pomona, Calif. The NHRA Motorsports Museum is a 501c (3) non-profit institution. The Museum’s mission is to celebrate the impact of motorsports on American culture. The Museum collects, preserves, exhibits and interprets the vehicles, stories and artifacts that represent America’s affection for, and the influence of, automotive speed and style in all its forms.