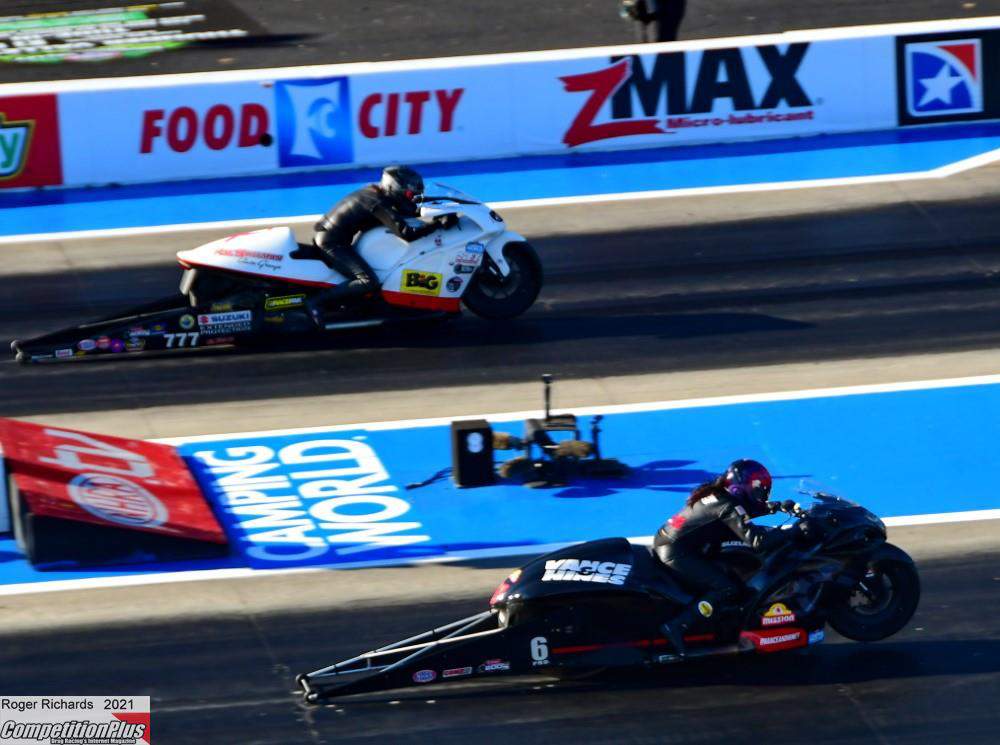 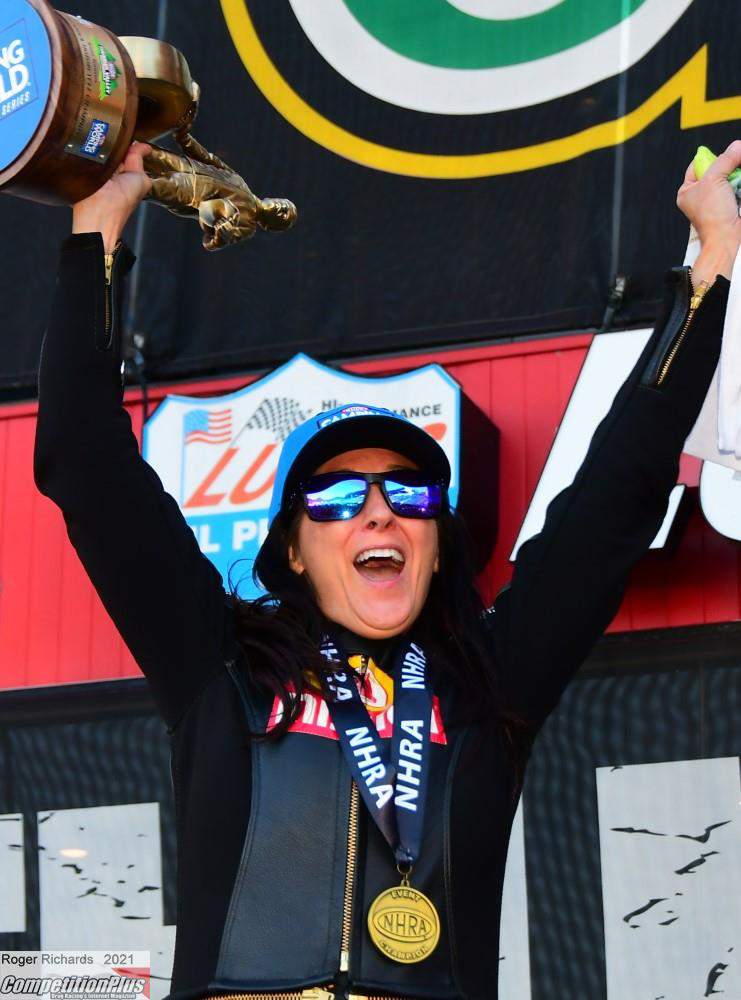 Angelle Sampey is the winningest women racer in NHRA history, and she keeps on winning.

The difference was at the Christmas tree. Sampey had an .010 reaction time, slighter better than Stoffer’s .029 reaction time.

On Sunday, she defeated teammate Andrew Hines, Chris Bostick, another teammate in Eddie Krawiec and then Stoffer. Sampey, with two races left in the season at Las Vegas and Pomona, Calif., is second in the points just 25 behind leader and reigning world champion Matt Smith.

Sampey is a three-time PSM world champion, capturing titles in 2000-02.

“It was tough,” Sampey said. “It was a very tricky racetrack to get down with a Pro Stock Motorcycle. There are lots of bumps that unsettle the motorcycle and the biggest task for me was to get it straight down the track because when it starts to go to the right or go to the left and you have to hang off and you start hitting those bumps, then it starts reeling and it is very scary. When I raced Chris (Bostick), I saw his red-light and the bike started wiggling and going toward the wall and I intentionally shut it off because I wanted to save the run.

“Then when I raced Eddie (Krawiec) the same thing happened. It started getting wiggly down there and I rolled off the throttle a little bit and got back on it and managed to get the win. With Karen, I knew that wasn’t going to be an option. I knew I had to stay on the throttle and my team let me know that I threw away some ET. We did it. We won it. It was a rough day, but we made it happen.”

This was Sampey’s 45th career PSM victory and second this season as she also was victorious at Charlotte’s fall race.

“I was screaming down there like I won my first race ever because going into first round I was so nervous about the track and so nervous to get down there, I asked Andrew (Hines) if he wanted a bye run. I told him I could stay in the trailer, and he told me to get my butt down there and race. It seems like when I’m nervous I usually do well. When I have a lot going on around me, I usually do my best on the racetrack. I’m so proud of Vance & Hines because Karen showed today what they can do with the Suzuki 4-valves and that was a heck of a race in the final. I was really proud of that.”

Sampey acknowledged this season has been a learning curve for her on the Suzuki.

“It just took a while for me to trust the motorcycle,” she said. “It wasn’t the motorcycle or the team, it was all me. I’m finally coming around learning it and getting braver and trusting in my team and the bike. That was the mission to come back here and catch up with what we lost at the last race (in Dallas). I don’t know what is going to happen at the end of the year, but it sure would be great to get the No. 1 back on the motorcycle. When I first started racing, it was always like trying to get my first win and now I’m just worried about when is it going to be my last. This may be my last, I don’t know, that’s why they mean so much to me.

“If I can get the No. 1, it might be my last, so I’m trying really hard. My team deserves it and I’m trying to give them what they deserve. I have been out here so long, that I appreciate everything I get. In the beginning it was almost too easy and I didn’t know what it meant. I didn’t know what struggles meant and sponsors came easy and today it is so hard. When I win a race, the emotions are 100 percent genuine because it is a task to get it done. I love this sport so much and I really dread the last day I’m going to be out here. I don’t want that to happen anytime soon and I’m hoping Vance & Hines keeps going. I’m not ready to go anywhere.”