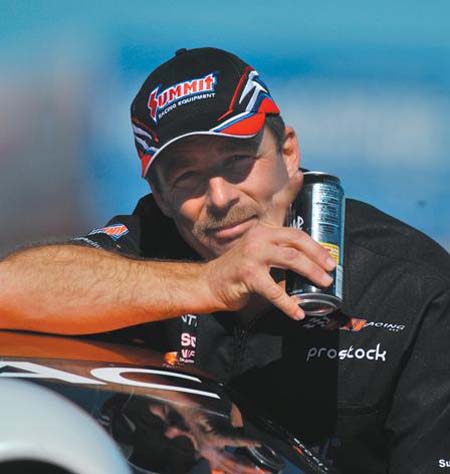 Greg Anderson has seen NHRA Pro Stock at the highest of highs and the lowest of lows. And for the four-time series champion from Mooresville, NC, he sees good times ahead.

Despite the announced retirement of his teammate since 2003 at the end of the season, Anderson believes the Pro Stock fans are in for a treat in 2020.

"KB Racing has an exciting year ahead of us, with some really neat things that should be coming down the pipeline," said Anderson. "We've worked hard all winter so that we could have a great year, and the plan is to hit the ground running with the two Summit Racing Chevrolet Camaros and each of the KB Racing-powered cars."

Anderson would love to hit a drag racing milestone this season. He's just six wins away from hitting 100 career, and three away from passing former boss Warren Johnson on the all-time list. As he puts it, if he gets ... he gets it. Winning a fourth championship is the ultimate goal.

"I've said it, again and again, these past couple of years; this class is tougher than ever. Wins don't come easy, but we go to every race with the expectation that we can bring back a trophy for Ken Black and Summit Racing," said Anderson. "It's been 'all hands on deck' this winter even more than usual because we missed the opportunity to bring that big trophy home last year. Every single person in the KB Racing shop is working towards the same goal, and hopefully, this year, we'll achieve what we set out to do. It'll be a battle, but we're ready for it."

Beyond this season, there are some uncertainties with Line's retirement, but for Pro Stock, he believes there's lots to be excited about.

"There is a positive surge in Pro Stock right now, across the board," he said. "It will be an adjustment for all of us when Jason moves out of the driver's seat at the end of this year, just because it will be different, but he is still going to be involved in every facet of this team other than sitting behind the steering wheel of the car.

"We're all grateful to Ken Black and Summit Racing for their continued support of the team and this class, and we're looking forward to positive things in the future as we move forward together."