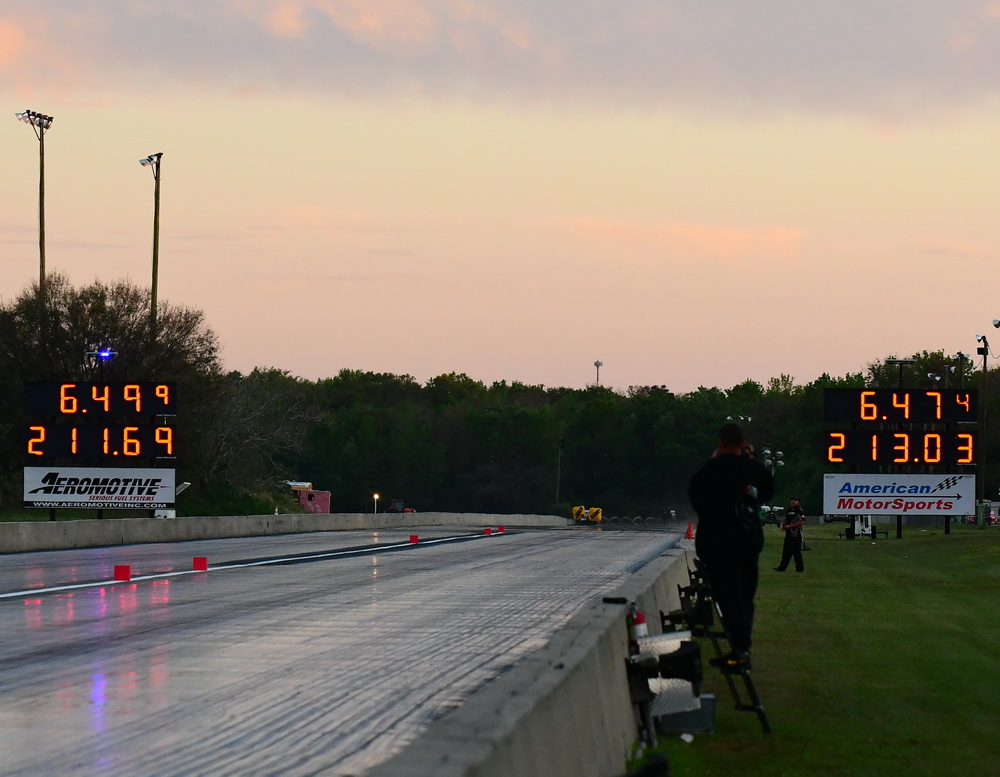 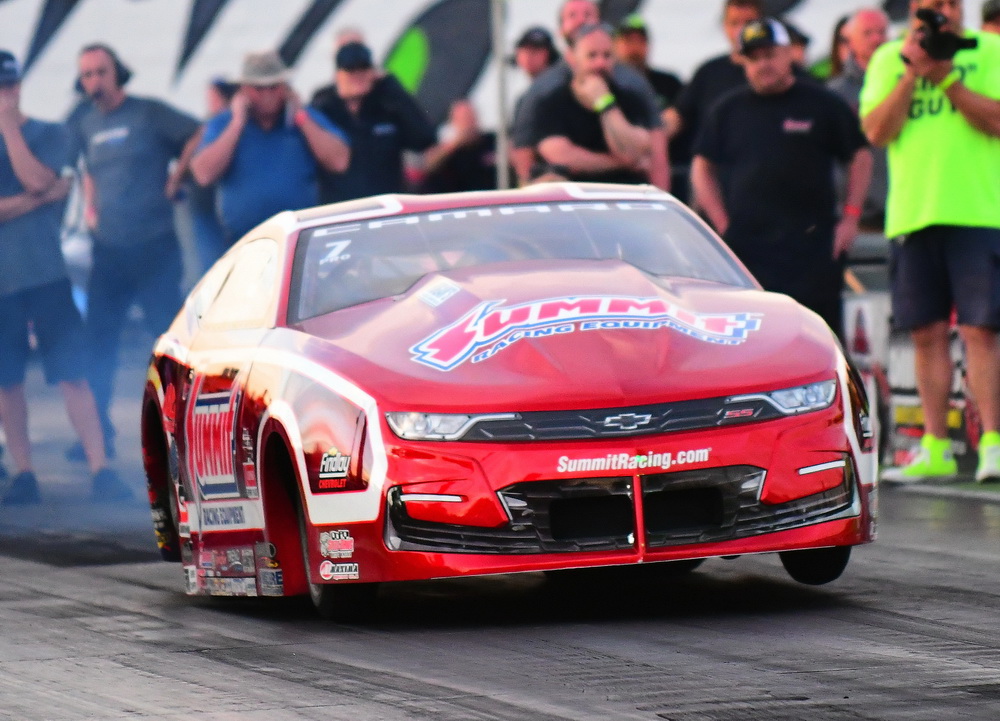 It didn’t take long for Greg Anderson to leave an impression at the Drag Illustrated World Doorslammer Nationals presented by CTech Manufacturing.

The four-time Pro Stock world champion rocketed to the provisional No. 1 qualifier spot on Friday at Orlando Speed World Dragway, making the quickest run in the history of electronic fuel injection (EFI) Pro Stock with a monumental blast of 6.474-seconds at 213.03 mph in his Summit Racing Equipment Chevrolet Camaro.

PRO STOCKAfter one day, Anderson’s 6.474 puts him in a good spot as he tries to claim the $75,000 prize, which the largest single-race payout in Pro Stock history.

“It felt really nice in low gear and just floated the front end out there,” Anderson said. “This has been a fun race. You can concentrate on your race car and make the changes you want to make. It’s been great so far and I’m looking forward to (Saturday). It’s going to be a really fun deal. The car should and could run better tomorrow, so that’s fun. I love fast racing and I love quick E.T.s and big speeds.”

After major struggles to open the NHRA season, Anderson and his talented team were determined to get things turned around in Orlando. The team tested extensively this week, and found their rhythm in a major way on Friday night. With ideal conditions likely again on Saturday, Anderson hopes to lower the boom even further.

“It was a good start and we needed it,” Anderson said. “My red Summit Chevy was not happy the first two races. It could not get ahold of the track in Pomona or Phoenix. We made some wholesale changes and it looks like we made some right decisions because it was a completely different feeling race car. It’s fun to drive right now. We definitely gained ground where we have a chance to win again. We’ve learned a lot, so we’ll keep moving forward.”

Defending Pro Stock world champion Erica Enders qualified second with a 6.478 at 212.59 in her Melling Performance/O.PenVAPE/Elite Motorsports Camaro, while teammate Alex Laughlin followed in third with a 6.489 at 211.89 in his Havoline Camaro.

Enders, who won the most recent race in Phoenix, continued her torrid start, making the fourth quickest run in the EFI era.

“It was a great start to what’s already been a really fun weekend,” Enders said. “We’ve got a great car, our guys are working hard and it’s just been really good. It’s been such a fun environment and I’m proud to be part of it. It’s been quite the spectacle and (Saturday) should be fun.”

Laughlin, whose run put him in the top 10 of the EFI era, also netted $1,000 after beating Bo Butner in their head-to-head matchup during qualifying. It was a nice bonus for Laughlin on what he hopes is a big weekend.

“That was awesome,” Laughlin said. “The best part of it was Bo (Butner) wanted to grudge race for $1,000 and we agreed to it, even if we hadn’t made a great run yet (in testing). I was pumped we made a good run.” 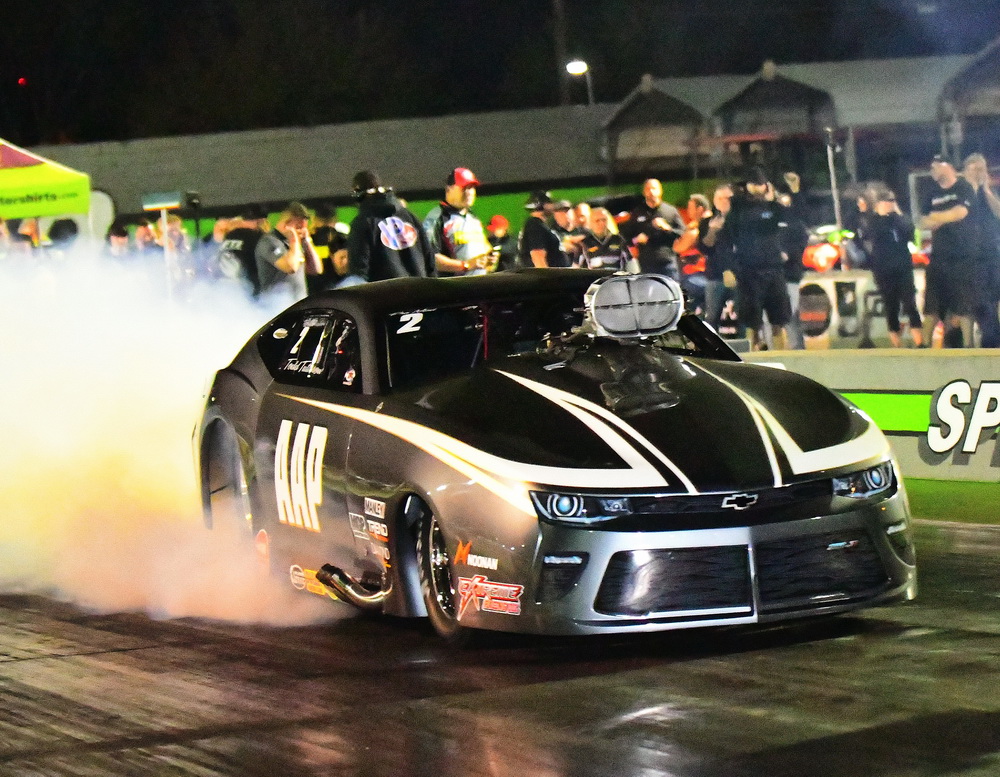 In Pro Mod, Tutterow took his brand-new AAP Racing ’20 Camaro to the top spot with a 5.684 at 253.04. It was Tutterow’s first competition pass back in the U.S. after sweeping the Arabian Drag Racing League Pro Mod championship in Qatar over the winter.

“We won a championship overseas, got a brand-new car, came here, and every run has been very good,” Tutterow said. “Here we are No. 1 qualifier in the first run, so we’re very happy. Jerry Bickel builds the best car out here.”

Tutterow in his roots-blown Camaro leads a pack of 27 cars that put up numbers during Friday’s lone qualifying session, though just over 30 cars are on the property. Tutterow is followed by “Tricky” Rickie Smith in his nitrous-assisted Strutmasters.com ’20 Camaro with a 5.689 at 254.28 and defending world champion Stevie “Fast” Jackson in his supercharged Bahrain 1 ’20 Camaro with a 5.699 at 249.90.

With Saturday’s forecast calling for a high of 64 degrees, Tutterow is expecting a challenging day of qualifying. Teams will get three more qualifying sessions before setting the field for Sunday eliminations.

“I think [Saturday] is going to be good,” Tutterow said. “I think it’s going to be tricky because it’s going to be cold. Hopefully my tuning experience can make it work. It’s cold, we got a new car, but there’s a lot of new cars out here. Anybody can go to the front. Stevie’s made some good runs, and so has Jim Whiteley [No. 4]. Hopefully we do good.”