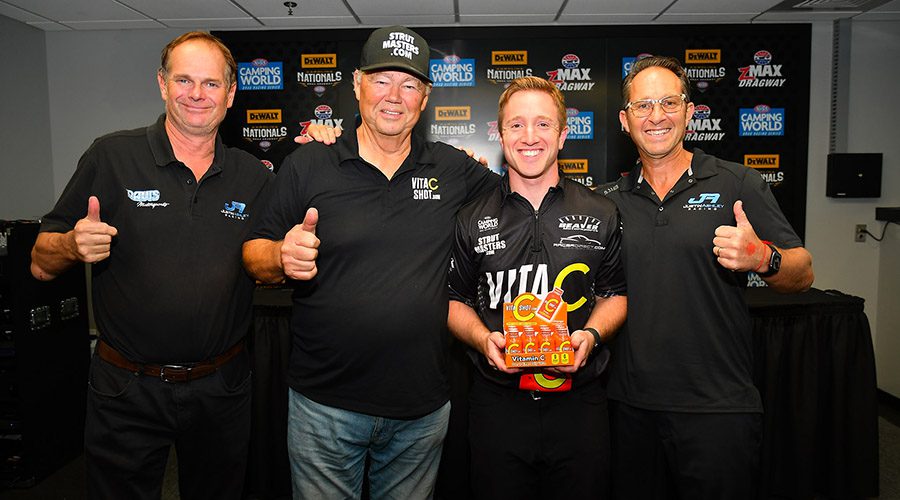 Chip Lofton was making a name for himself in the automotive-suspension industry with his Strutmasters company and in drag racing marketing as the patron saint of underfunded drivers. But he suddenly discovered the frightening truth at the 2019 NHRA Finals at Pomona, Calif. – more than 2500 miles from his home at Roxboro, N.C. – that he couldn’t help himself.

That was the first step in what turned out to be a three-year-long battle with cobalt poisoning – and the doctor who misdiagnosed it. The ordeal, which still has him facing more surgery later this year and months of rehabilitation, has caused him to decide to take a break from his NHRA activities.

More than two dozen racers in at least seven pro and sportsman classes have benefited from funding from Lofton and his Strutmasters.com branding in the past four years. The former NASCAR Truck Series and ARCA team owner and co-owner of stock-car racing’s Hooters Pro Cup Series said he will continue to partner with Mark Beaver and Beaver Motorsports to field the Vita-C Shot Pro Stock car that Richie Stevens drives.

“That will keep me involved in drag racing,” Lofton said, noting that “I don’t see it as the end of the road but as a bend in the road.”

Lofton, 72, had been proud of his effort to help racers who reminded him of himself when he was in his 20s, racing his B/Gas 1941 Willys “but had to get out for lack of funds.” He also was proud of himself in 2019 for taking the initiative to try to lose 40 pounds and become fitter following hip-replacement surgery.

“I remember Scott Palmer stopping me on the way at Indy and asking me if he could give me a ride. I said, ‘Thanks, but I’m getting my exercise walking everywhere.’ I figured if I refused the use of a golf cart at each race and walked 20 miles on a three-day race weekend, I could accomplish those results. And I did. Walking from the pits to the [starting] line for each team and each session became my routine,” Lofton said.

“Toward the end of the season, I was walking faster with ease and losing the desired weight. And I seemed able to convince myself that hearing and vision problems and balance were just part of getting older,” he said. “But at Pomona, I realized that confusion had besieged me and that I had a serious problem. It was at the 2019 Pomona Finals that I realized I was unable to safely drive my rental car.

I was confused and afraid I might cause a wreck and hurt someone.”

Pride kept him from sharing his concerns with wife Sharon when he returned home. He didn’t want her to know that he didn’t feel safe driving. So he would head out to work, drive his car one block, and have his employees pick him up and drive his car to the Strutmasters headquarters.

By then, Lofton said, “I had lost my coordination and would knock a glass over, reaching to pick it up. I couldn’t remember my grandsons’ names. I was scared, but just as I fix suspensions, I was determined to fix this.”

Then his doctor told him that he had Alzheimer’s disease.

“I don’t think so,” Lofton told his physician. “I think I have cobalt poisoning from a 16-year-old metal-on-metal hip replacement.” But his doctor sent him to a neurologist to determine how advanced the Alzheimer’s disease was – and test proved Lofton correct. He didn’t have Alzheimer’s disease. But he had to spend three more months to have bloodwork done that tested for heavy metals. Finally, his theory became fact. That was a victory but not a victory – he was right, but the fact was he had tested positive for cobalt poisoning.

According to the Mount Sinai Health System, New York City’s largest academic medical system, cobalt poisoning – an exposure to excessive amounts of the natural element that actually is healthy in much smaller increments as a component of Vitamin B12 – can cause serious health problems. They include cardiomyopathy (characterized by the heart having trouble pumping blood), nerve problems, headaches, cognitive difficulties, vertigo, deafness, tinnitus (ringing in the ears), vision problems, hypothyroidism, and thickening of the blood.

Cobalt toxicity can occur from the wear and tear of some cobalt/chromium metal-on-metal hip implants. This kind of implant is an artificial hip socket that fits a metal ball into a metal cup, or socket. Sometimes, cobalt particles are released and introduced into the bloodstream as the metal ball grinds against the metal cup when a hip-replacement patient walks. The cobalt can infiltrate vital organs. So for Lofton, surgery was scheduled right away. At that point, his health was deteriorating as he struggled to find words to complete a sentence.

“I was good at finding a work-around, using other words to describe what I meant. Most people didn’t know I couldn’t find the right words,” he said.

The surgery replaced the metal ball in his hip with a titanium ball and the metal socket with a ceramic one. The surgeon told Lofton he removed lots of “mud” (caused by cobalt powder mixed with body fluid) from his leg and reported that his glut muscle was so damaged that it “confused the DNA” and was growing a bone inside the muscle (at the time about an inch long but now three inches long).

With the metal finally removed, Lofton learned that his body could in time detox the cobalt from his blood – but not from his brain.

The operation solved one problem but cased another one. The insertion of the new ball and socket made Lofton more than an inch taller on his left side. He called it “a detail the surgeon failed to mention.” Lofton said, “I’m the only 72-year-old that grew and inch and a half after he turned 72.”

However, for a while, he wasn’t aware of the new problem. And he was determined to resume normal activities. He saw improvement in his health and decided he was able to drive once again, although he was a wee bit guarded about it. He was ready to rock for the 2020 season. He still was experiencing problems with his vision, hearing, balance, and fatigue, but he was happy to be back at doing what he loved.

By the time the Gatornationals rolled around in March, Lofton was sponsoring 13 teams, and he was orchestrating an impressive group photo there the day before the event started. That’s when the COVID-19 pandemic socked the sports world – the entire world – and the NHRA called off the race and entered a four-months-long hiatus.

When a new, adjusted schedule came out, Lofton was at every race. But in the middle of the season, he began using a cane. Because he wasn’t aware that he was an inch taller on his left side, he – by his description – “crushed” his right knee. He made it through the season with the help of the cane but had to schedule a knee replacement.

Lofton asked the surgeon if the knee surgery could give him back some of the height. The answer was no. Not only that, but Lofton lost another half-inch through that surgery, making him one-and-a-half inches taller on his left side. Built-up shoes only exacerbated the problem. So now, following the conclusion of the 2021 racing season, he will undergo hip-replacement surgery on his right hip and add the inch and a half back.

“Stretching muscles, et c., will require a good bit of rehab and adjustment,” he said. “So that’s the reason I’m taking a step back. “I’m not looking for sympathy,” Lofton, 72, said. “I’m trying to raise awareness for anyone who might have a metal-on-metal hip implant who might be misdiagnosed as having Alzheimer’s disease or dementia.”

He said his hope is that others like him could undergo testing to see if they have been stricken with cobalt poisoning. He has struggled with the illness for three years and is glad to help save others the trouble if their situations happen to be similar.

But Lofton’s mission in sharing his story is twofold, he said Because his doctor said he could rid his blood, but not his brain, of the excessive cobalt, Lofton said, “I also am hoping someone out there can tell me how to get this out of my brain that I might have a full recovery.”

Lofton sold Strutmasters in August 2020, and said, “With all that has transpired, that has been a good decision. I’m a partner in the bigger company, and together we have been able to grow Strutmasters significantly. They have been awesome to work with.

“We never know what our future holds,” he said, “but I’m grateful to all the teams that allowed me to be a part of their program. I hope I proved that there is a place in NHRA for the little guy. I am just another little guy. Hope to see all of you soon. Thanks for the ride of a lifetime.”

Before he became involved in the NHRA, Lofton was part of a group that owned stock car’s Hooters Pro Cup Series. And he helped son Matt Lofton in his racing pursuits in late-model stocks, ARCA, and finally in the NASCAR Truck Series from 2006-2012. Together they won a race in 2007 and had three podium finishes in 2012.