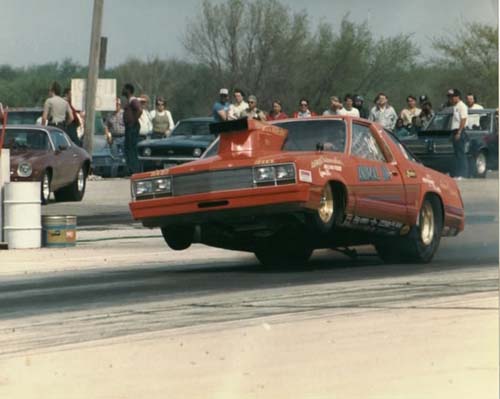 A common misconception suggests the origin of nitrous-injected doorslammer racing can be traced back to the International Hot Rod Association’s Top Sportsman division. In fact, the first organized competition for nitrous-aided door cars dates back to the American Hot Rod Association's Pro Stock class. During the last four years of the AHRA’s existence, officials bucked conventional Pro Stock regulations of the day by allowing the use of nitrous oxide. 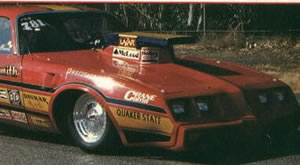 Tom Chelbana drove this neat Pontiac that actually carried horsepower from an Oldsmobile engine. The car was owned by Dave and Karen Smith and was one of two cars sponsored by NOS.

In 1980, Pro Stock was a class in transition. On the National Hot Rod Association side, Pro Stock cars were running on a pounds-per-cubic-inch basis with special weight breaks and/or handicaps based on the make of car. The IHRA took advantage of their rival’s complicated and rather unpopular structure and countered with a simplified unlimited cubic-inch format. As a result, the first Pro Stock car to break into the seven-second zone was racing under IHRA sanction

So where does AHRA Pro Stock fit into the equation? At the start of the 1980 season, the AHRA was deep in the same quagmire as the NHRA, struggling to maintain a level playing field through the use of a cumbersome rules package. To their credit, those in charge of the AHRA recognized the quandary they were in, and they reacted accordingly, making sweeping rules changes.

The 1980 AHRA Pro Stock season had gotten off to a lackluster start, but that was soon to change. The organization decided that implementing a Mountain Motor format was the best way to give the class the publicity it deserved, and inject new life into it.

There was a major problem, however.

The class was full of small block-powered cars and they had to find a way for racers to make the transition to the big-inch powerplants without making their equipment obsolete.

The solution was simple. Allowing the small block cars to run with nitrous oxide would make them competitive with the Mountain Motor-equipped machines.

A quick perusal of the rulebook revealed the following base weights: Unlimited cubic inches - 2350 lbs, and small block 2150 lbs. There were rules put in place to deduct pounds or implement penalties for using certain accessories.