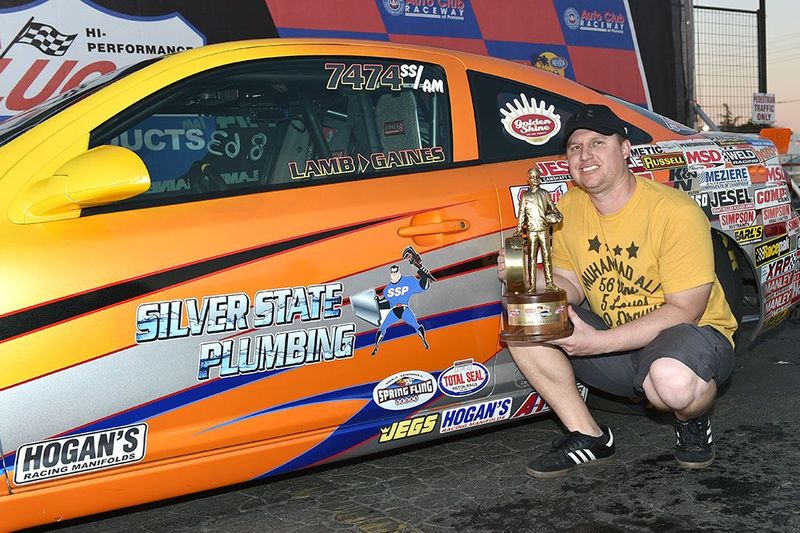 The winner of four NHRA world championships in the past five years, including two last year, does not plan on competing for another one this year.

But his desire to dominate in competition isn’t waning, and he’ll race this weekend in the DENSO Spark Plugs NHRA Four-Wide Nationals at The Strip at Las Vegas Motor Speedway.

The native and resident of Henderson, a southeast suburb of Las Vegas, is very familiar with the track. It’s where he first competed in an NHRA Jr. Dragster at age 8 and before moving in full-size racecars for bracket races when he was 16.

The last time he competed at The Strip in an NHRA event was Oct. 29, 2017, when he drove his Redback Boots COPO Camaro to winning the Wally Trophy in Stock Eliminator after clinching the world championship in the fourth of seven elimination rounds. 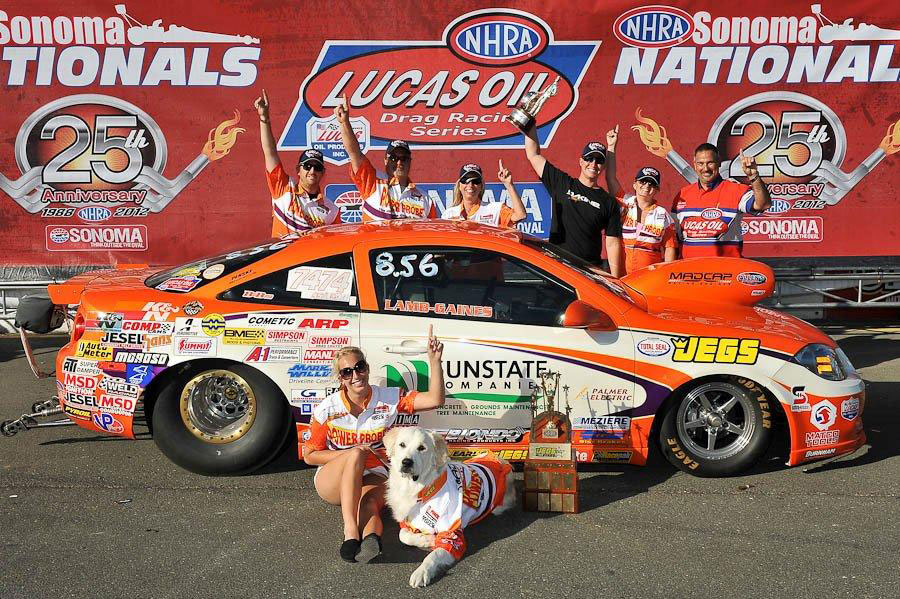 Those certainly are hall-of-fame credentials.

“I can’t really say how many wins we have,” said Lamb, who prefers tuning and setting up his cars to driving them.

“It’s gotten pretty serious,” said the business analyst for the City of Henderson, which offers a four-day, 40-hour week that enables him to travel nearly 25 weekends a year for big-money bracket races and NHRA events.

“It’s been nonstop. People think it’s fun racing all the time, going all the time. Even when we’re not racing, we’re working on the racecars, motorhome and rigs.”

Justin met his wife, Jeanine, when she worked as the safety manager for The Strip’s safety crew. They married in 2012 and now are joined at races by son Jayce, 4½, and daughter Jovi, 8 months.

A Jr. Dragster will be delivered by longtime friend Antron Brown to the Toyota NHRA Sonoma Nationals in late July and be ready when Jayce turns 5.

Family is one reason why he plans to compete in very few NHRA divisional races that would eliminate him from world championship contention as participation is required in at least eight divisionals to contend for championships.

“As of right now, we don’t plan on chasing points again. We want to try to run a few more national events and big money brackets. That gets our sponsors more exposure than they do at a regional (division) race.”

His young family also is a factor in altering his race schedule. 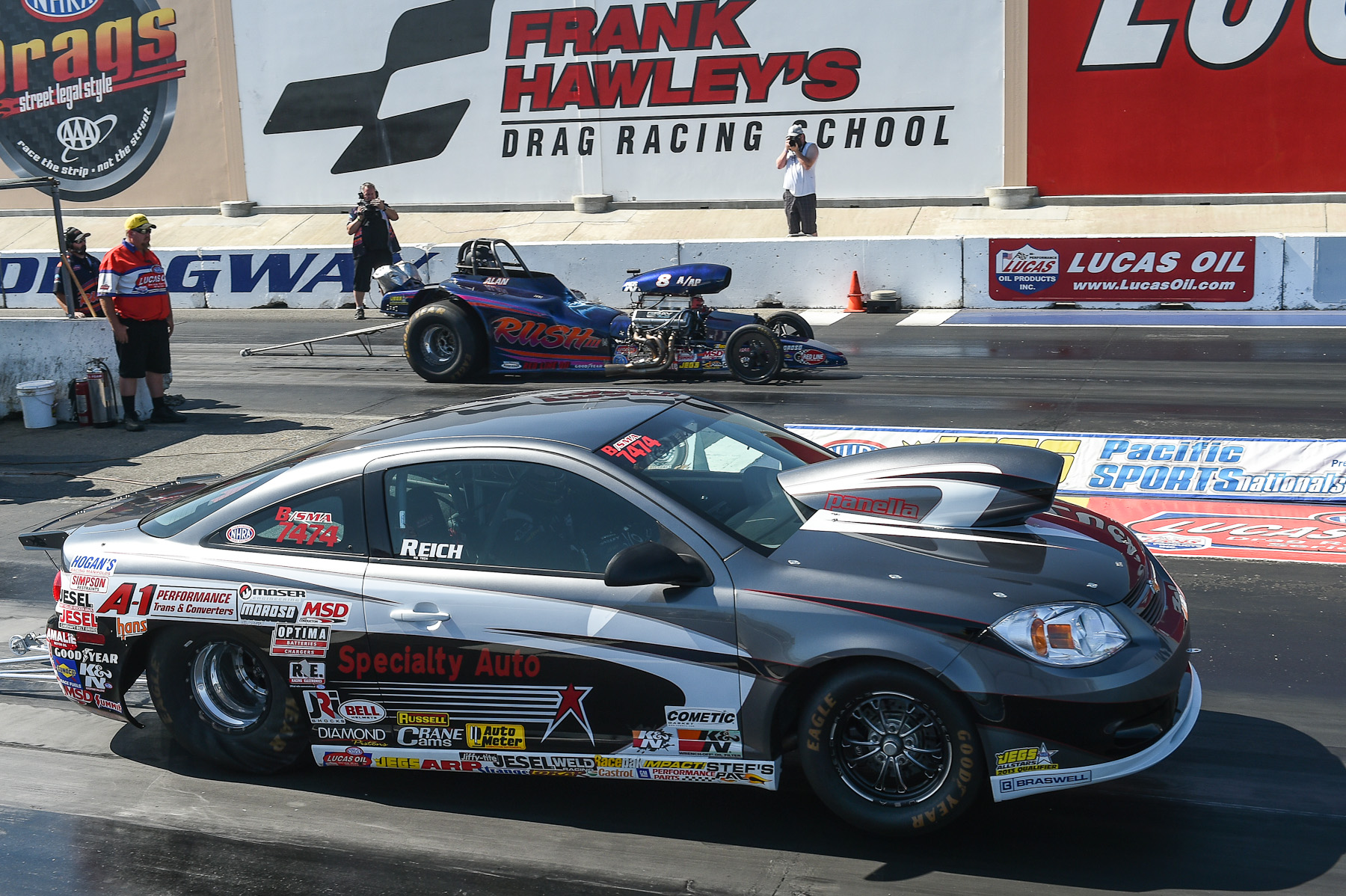 Family is one reason why he plans to compete in very few NHRA divisional races that would eliminate him from world championship contention.

His parents created the racing titan when he became old enough to drive a Jr. Dragster. They were involved in drag boat racing but came ashore to focus on their son’s driving.

“It started as something for the family to do together, but now it’s a business,” said Chris Lamb, one of the top-producing Matco Tools distributors in the country.

“I worked long days on my (Matco) truck, and when Justin turned 16 he would have towed the racecars to the (Las Vegas) track and have everything set up by the time I got there. I didn’t know anything about (land) drag racing or setting up cars for bracket racing. Fortunately, Justin was a fast learner.”

Justin inherited his father’s work ethic. He raced throughout college and graduated from the University Nevada Las Vegas in 2008 with an accounting degree that led to a full-time position with Henderson.

Lamb has no desire to leave the Sportsman ranks.

“It wouldn’t do much for me to be in Top Fuel or Funny Car,” he said of NHRA’s top professional categories. “Whoever drives a Top Fuel dragster or Funny Car that is tuned by Alan Johnson is going to eventually win a world championship. Our racing is more technical.

“In my racing, the drivers mean a lot more. Our races are down to thousandths of a second, week in and week out.