RAIN IS THE BIG WINNER ON FRIDAY AT FALL FLING - GALOT 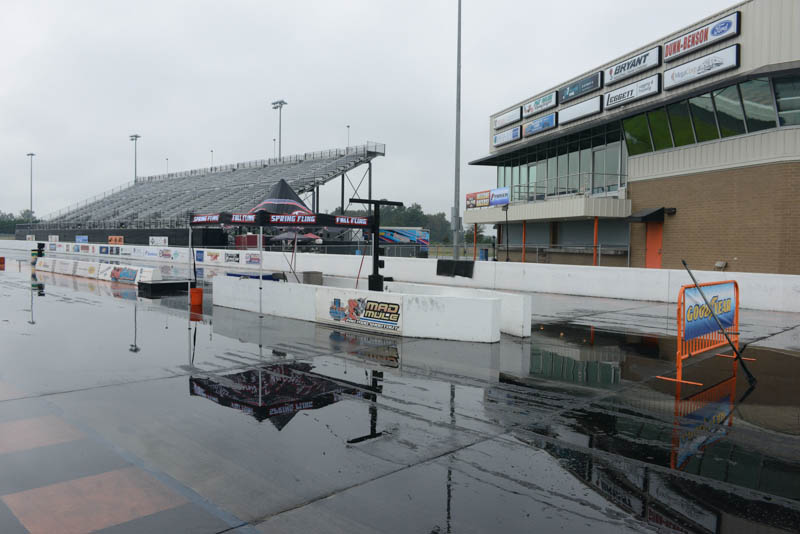 After an historic night, ATI Performance Friday at the Sparco Fall Fling presented by Optima Batteries began with wet weather moving in overnight.

For the first time in ‘Fling history, two door cars met up in the final round when Andy Dolan faced A.J. Ashe. Dolan’s Chevelle had been on a roll all day but Ashe was punch-for-punch on the same journey especially after defeating Wednesday’s winner Kyle Cultrera in round seven to win the Lindsay Racing Products Bounty Award for defeating the previous night’s winner.

Just to recap, the final was over just as easy as it began when Ashe turned on the red-light to hand the West Virginian Dolan his first ‘Fling win.

Consistent rain plagued the morning forcing officials cancel the day’s activities. “We do not see a window opening up to have the track dried and get any racing in today,” said Kyle Seipel. “The racing action will pick up tomorrow morning at 8:30. GALOT Motorsports Park has the best track drying equipment possible and depending on how long it takes in the morning to get the surface ready, we’ll be able to announce a more specific event schedule. We still have a ton of Fling money and prized to give away and are looking forward to a lot of great Fling racing action.” 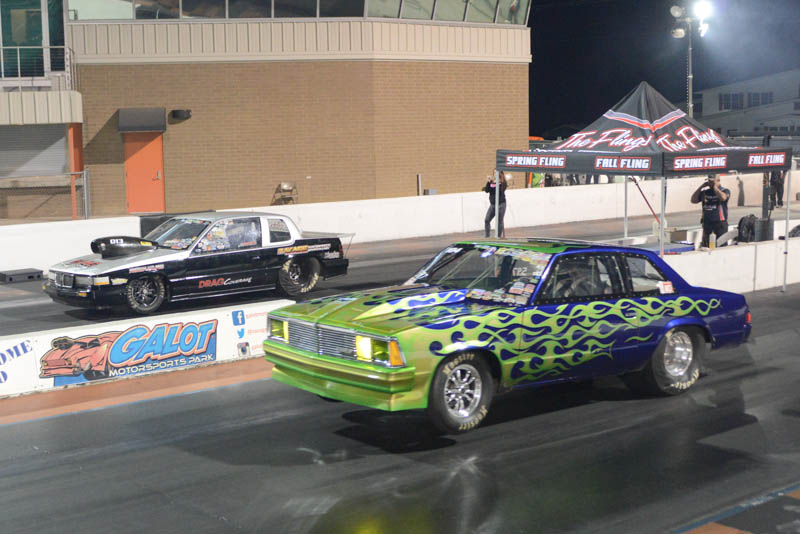 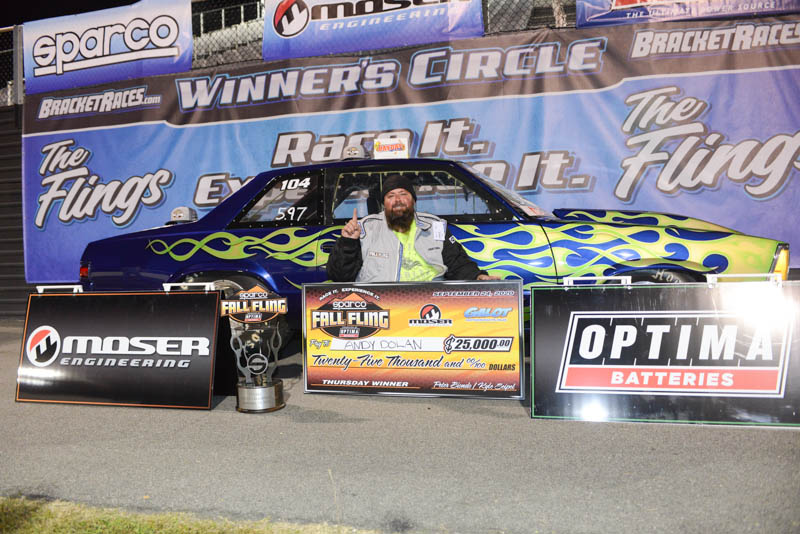 Moser Engineering Thursday at the Sparco Fall Fling presented by Optima Batteries opened up to cloudy skies with just slight bits of precipitation dropping out of the skies. A large group of new entries showed up this morning and received a time run while the balance of entrants waited for the first round to begin.

Consistent showers plagued for the better of an hour or so, but eliminations finally began around 10:00 in the morning, and continued on all day without any more “stuff” falling out of the sky.

In round seven, Wiggins ended Williams’ night. Pollard turned on the red-light to advance DiMino. AJ Ashe defeated Cultrera for a big win that included him earning the Bounty Award for defeating last night’s winner, a set of front wheels from Lindsay Racing Products, and in addition his 006 RT will give him the bye in round eight. Paschal ended Bloomfield’s night, and finally Dolan took his bye run.

Round eight, the quarterfinals and Ashe took his bye run to advance him to the semifinals. Wiggins’ dragster faced off with Dolan’s door car with Dolan using a perfect reaction time for the win. Next up, the dragsters of DiMino and Paschal staged up and DiMino turned on the red-light to move Paschal into the semis. 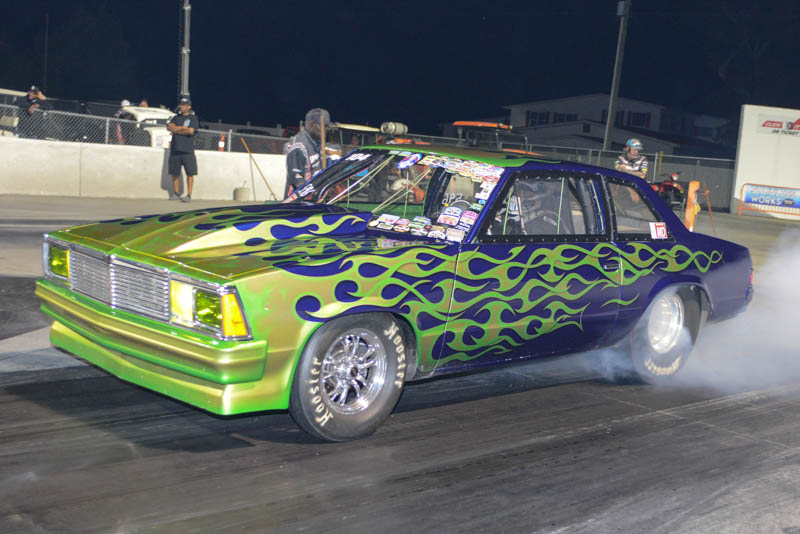 With each of the remaining drivers already having a bye run, the bye reverts to the best reaction time and with his perfect RT, Dolan will get another bye run with his door car to advance straight to his first ‘Fling final round.

Before that final, Paschal and his dragster would meet up with Ashe and his door car to see who would face Dolan in the final. With identical reaction times, Ashe was able to hang on for the win to move his door car to the final marking the first ‘Fling final where two door cars will face off for the big prize.

In that historic final, it was over quickly when Ashe turned on the red-light by -.004. Earlier in the week, Dolan was asked if he was going to attend the ‘Fling Million contested next week in Bristol. “We’ll have to wait and see,” Dolan said. We’d have to say his mind is made up after tonight’s $25,000 win.

The main event of the weekend, the ATI Performance Friday begins in the morning with a $100,000-to-win race. MotorManiaTV.com continues to live stream the action with sponsorship from Hoosier Tires and JEGS. For all info and results, visit bracketraces.com. 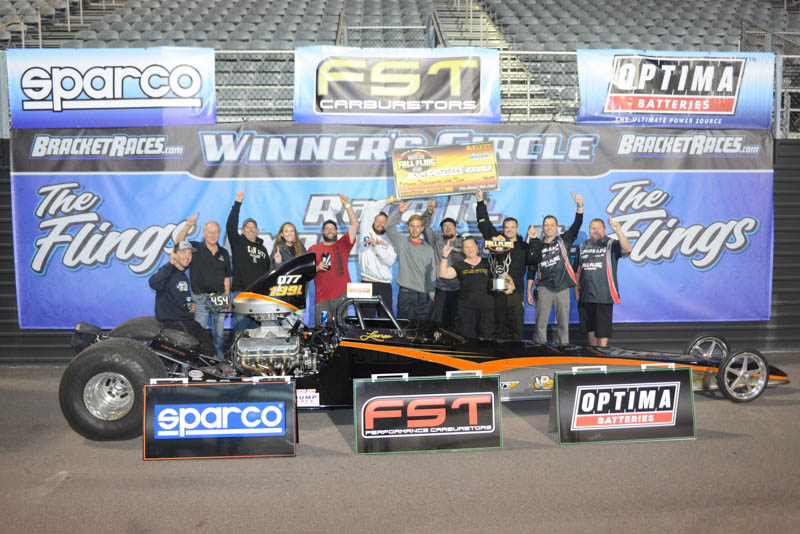 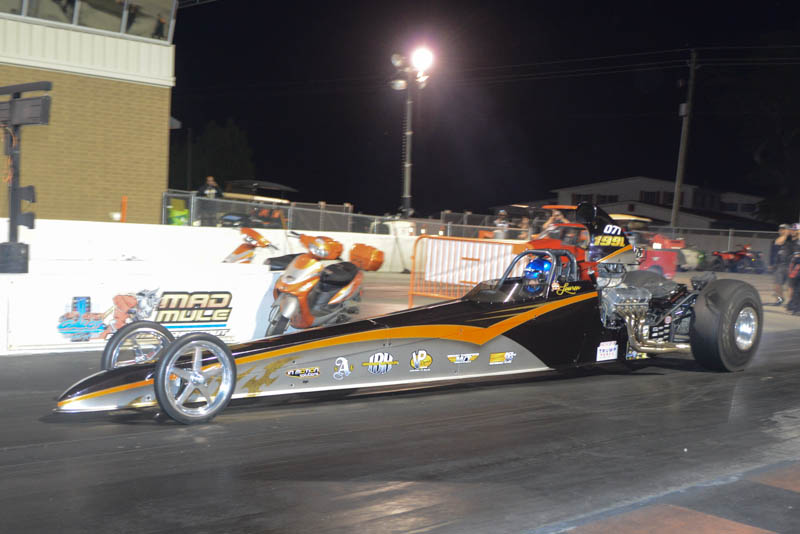 FST Wednesday opened up to cloudy skies but the racing continued all day. Today’s schedule called for a $15,000-to-win race and as of this morning, 396 racers came through the gate to compete.

One maybe unique feature to this event was the use of special numbers for each entrant, each with the Fling logo watermarked within. “One of the problems in the tower revolves around the various style car numbers an actually where the computer operator is situated,” said co-promoter Pete Biondo. “The computer operator then has to decipher the different styles and input them into the computer for each run. Kyle [co-promoter Seipel] and I chose to have car number stickers made for each entrant. The numbers were all a standard size and shape making it very easy for the computer operator to read. It’s actually has been done before at certain NHRA Bracket Finals for much the same reason.”

Biondo personally greeted each racer at the front gate and once the concept was explained, each one of them welcomed the effort in order to have the event run even smoother than it already does. “I can’t thank the racers enough for their cooperation in this,” added Biondo. “It definitely made the tower run so much smoother.”

One time run was allotted for all with this being the last time run scheduled for the rest of the week. From here on in, only new entrants would be allotted a time run. Everyone else goes right into eliminations for Thursday, Friday and Saturday’s races.

Following the time run, a word of grace, singing of the greatest song in America, the Star Spangled Banner, and racing was on. What started at 12:20 in the afternoon, by the hour of 8:00 we were down to 14 drivers left for the ladder round; Colby Fuller, Stace Shrawder, Noah Carpenter, Bennie Ulmer, Gary Williams, Tracey Wiggins, Mark Siegel, Greg Duffield, Kevin Brannon, Holden Dial, Shane Maddox, Kyle Cultrera, Jamie Holton, and Stephen McCrory.

Round six and the survivors were Wiggins, Maddox, Duffield, Brannon, Cultrera, Williams, and Fuller. With seven cars left in the quarterfinals, a .003 reaction time by Fuller with give him the bye into the semifinals.

Quarters and first up was Williams versus Duffield with Duffield turning it red to advance “G-Dub” Williams. Maddox faced off with Cultrera and Maddox also turned on the red-light advancing Cultrera. Brannon and Wiggins and again, the red-light bit Wiggins. With Fuller taking his bye run, according to the ladder, it makes the semifinals a door cars versus door car and dragster versus dragster match up, guaranteeing a door car versus dragster final round.

First up for the semis and Fuller ran under his dial to advance Williams who was coming off a runner-up performance in last night’s Dragster Shootout. Next up was Brannon and Cultrera, a double run-under affair with Cultrera getting the win light.

For the final, Cultrera had lane choice and chose to move over the left lane forcing Williams out of his preferred lane. When the ‘Tree turned green, it was Williams with a .002 reaction time but a run-out by .003 handed Cultrera his first Fling win.

TUESDAY - SILANCE SILENCES THEM ALL AT DAY ONE FALL FLING 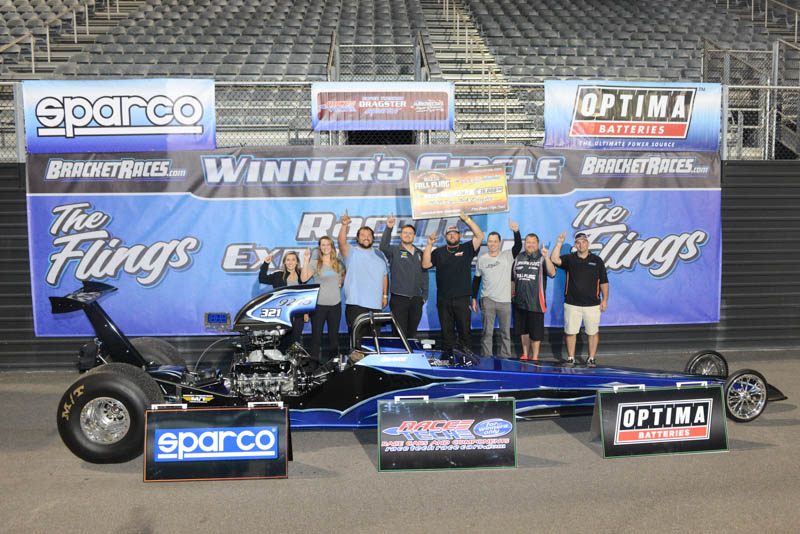 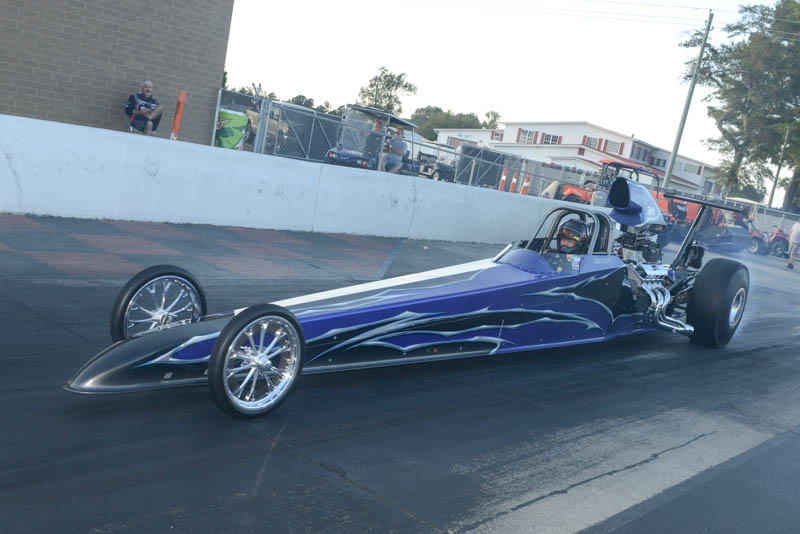 Day 1, Rob’s Automotive Test & Tune Tuesday of the Sparco Fall Fling presented by Optima Batteries opened up at GALOT Motorsports Park in North Carolina. On tap was a Test & Tune session followed by the American Race Cars/Race Tech Dragster Shootout. A random field of 32 racers signed up for a chance at either an American Race Cars or Race Tech dragster. The two finalists would race with the winner getting his or her choice, while the runner-up takes what’s left over; not a bad prize in itself. The two semifinalists earned $500. 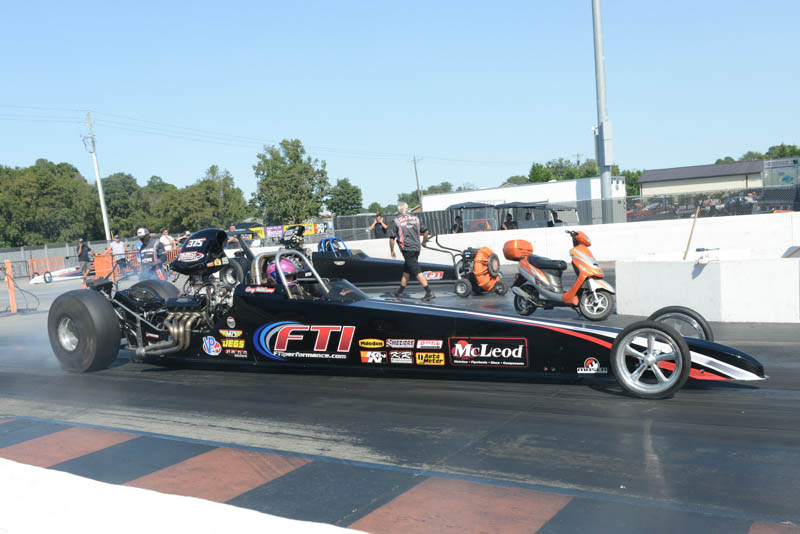 Round three and all drivers on the ladder, first up was brother versus brother, the Williams boys with brother Gary taking the reaction time advantage for the win. Next up was Patton; who has done so much winning this year including winning the Dragster Shootout earlier this year at the GALOT Spring Fling; moving on by defeating the door car of Glenn. Taylor picked the wrong time to have a .095 RT allowing Silance to move on. Finally, the last remaining door car of Ulmer went down in defeat to advance Morrison.

Semifinals, Patton and Silance faced off and by .0003-of-a-second, Silance stopped the Patton train. In the other half, Morrison turned on the red-light by -.006 to advance Williams.

Final round and it was Williams leaving first by virtue of the dial-in, but turning on the red-light by -.005 to award Silance with the win and his choice of dragster. Silance’s choice? The Race Tech product will be going back to Jacksonville, NC, while Williams takes home the American Race Cars.

FST Wednesday begins in the morning for a $15,000-to-win day 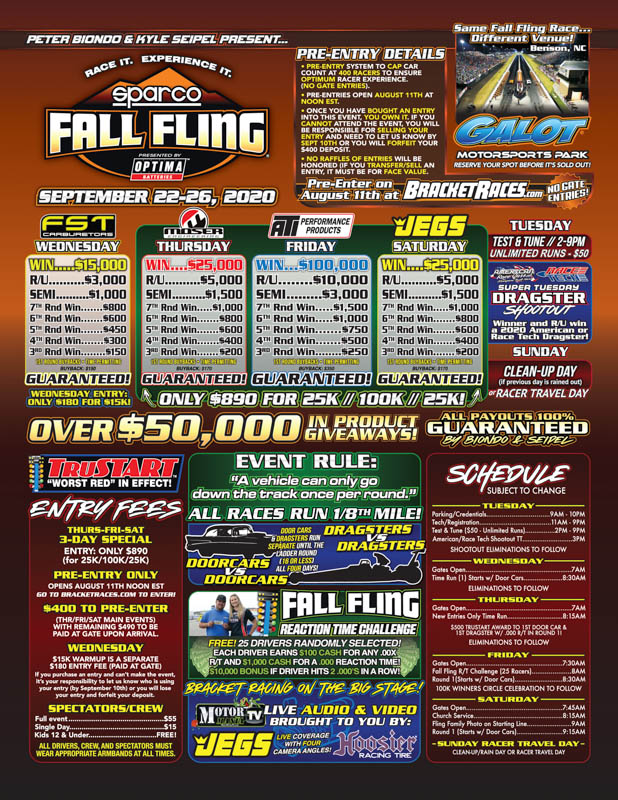 The next two weeks are going to be pretty exciting for the hundreds of racers who will be attending the Sparco Fall Fling at GALOT Motorsports Park in North Carolina, followed by the next week when the K&N Spring Fling Million will take place at Bristol Dragway in Tennessee.

The original Fling schedule became another victim to the pandemic requiring co-promoters Pete Biondo and Kyle Seipel to scramble in order to continue the tradition of promoting high dollar events which have become so popular in the bracket racing world.

“We had been working closely with our partner tracks to come up with a game plan for our Fall events,” explained Biondo. “After discussing our options and realizing the commitment we have to our racers and sponsors, we have come up with the best plan which will come to fruition in the next two weeks.”

That plan was announced several months ago which involved the Fall Fling, that has been run normally in Bristol, to move it to GALOT a week earlier than it was originally scheduled. The K&N Spring Fling Million has always been contested at The Strip At Las Vegas Motor Speedway. Due to restrictions in that state, it was decided to move the Spring Fling Million to Bristol Dragway the week following the GALOT event. That makes for two pretty exciting and busy weeks in a row. Each event name, sponsors, structure, and guaranteed purses will all remain the same.

“Kyle and I can’t thank our partner race tracks enough for helping us piece this all together,” added Biondo. “We were going in circles for a while, but are excited where we landed. It’s going to make for some much-needed back-to-back weeks of racing on the East Coast.”

While quite a number of racers from all over the country will be trekking to the east coast to attend the Fling events there, Biondo and Seipel didn’t want to leave their west coast customers without a race.