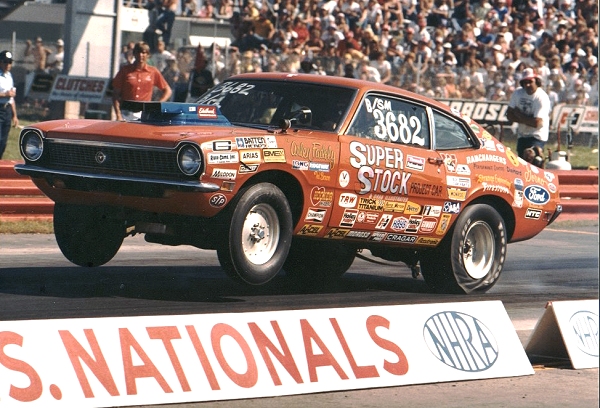 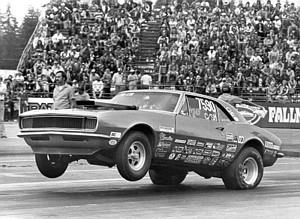 “We had just completed the Econo Dragster crusade and we wanted to do a doorslammer oriented version,” recalled former Car Craft magazine staffer Rick Voeglin in a 2004 interview. “Our initial version was to be called Pro Modified. It was intended to be a heads-up eliminator for sportsman racing on an affordable level.”

The objective was to attract body styles such as 1967 and later cars of the muscle era and some compacts. The vision included Camaros, Chevy II’s, Dusters, Barracudas, Mavericks, Firebirds, and AMC Hornets, just to name a few. The pounds-per-cubic inch ratio was established at 10 pounds. If one preferred a small block, the rules stipulated it had to match a combination which came with the car.

The initial Car Craft “rulebook” called for a fiberglass hood with an all-steel body. The engines would use a single four-barrel carb, flat tappet cam and stock cylinder head ports. The suspension had to also be acceptable in Super Stock and the tires could be as large as 12 inches. Their goal was to tap into the large contingent of C through G Modified Production cars in attendance at national events. As the writer put it, “A small block in a 3000-pound car is a natural combination.”

The NHRA took notice of this interest only after an influx of interest from racers planning to build these cars. This groundswell also inspired the then up-and-coming IHRA to not only offer these kinds of cars a place to race but also their own stand-along eliminator.

The final rules on the NHRA side mandated a 10.5” tire, 10-point cage, production heads (allowed to port one-inch down), it had to be a production car (1967 or later) of at least 500 units, wheelbase was limited to 103”, single-four barrel, transmission had to match the manufacturer, spoilers had to be production, stock suspension, no lightening of chassis, 50/50 weight distribution and the body could have no external modifications. Those were just a few of the guidelines. In 1975, in NHRA competition, there was only one class with a 9.5 pounds per rule. One year later, it was opened up to three classes with 8.5, 9.5, 10.5 weight breaks and labeled A through C. 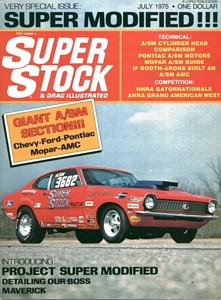 One of the icons for the Super Modified movement was Arlen Fadely, who ironically built a Maverick for the class as a project car for the magazine Super Stock and Drag Illustrated.

The Maverick which Fadely, Leroy Hinzman and Ed Bennett developed was nothing less than a full-fledged effort.

“I watched as most of the Trans-Am Series cars started out as body in white versions,” recalled Fadely in a 2004 interview with CompetitionPlus.com. “Ford was pretty screwed up at that time and you could actually buy a body in white through the dealerships. I ordered one from Walt Hickey Ford in Southgate, Michigan and paid $450 for it.”

The package came with doors, deck lid and that was it. He promptly had the car shipped to Don Hardy, who prepared the car according to the rulebook. The car was trick in every aspect

There was such a groundswell for this type of drag racing which inspired NHRA’s rivals, the American Hot Rod Association and International Hot Rod Association to both consider the trend and likewise possibility of making these cars a stand-alone eliminator.

Fadely was one of the few racers who never really wanted Super Modified to be a stand-alone class because in the end he believed this would be detrimental to the long-term survival.

“There was a lot of wishful thinking during that time that it would become a junior Pro Stock class,” recalled Fadely. “Those kind of deals are never destined to work. It didn’t work in the IHRA and it certainly didn’t work in the AHRA with the GT classes. When you have that style of racing, it is always exciting to watch. But, as the season wears on and guys become less and less competitive, the participation begins to fall off. There’s always a big difference between the successful (teams) and those less fortunate.”

Rickie Smith, the most successful Super Modified racer in IHRA competition, was branded as the reason why the Bristol, Tenn.-based sanctioning body also dropped the class.

Simply put, many believe IHRA Super Modified died because Smith won too many races and the competition stopped showing up.

“The IHRA just cancelled the class,” Smith said in 2004. “That certainly wasn’t my fault. I raced by the rules and the rulebook allowed us to run a bigger tire and that was about it. We just had the right combination and I think in about a year or so, everyone would have caught up with us. But, we worked hard – real hard.

"There were many nights that I laid on my back in the parking lot of my motel working on that car." 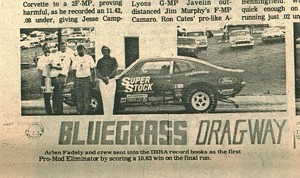 Super Modified was actually originally referred to as Pro Modified, as evidenced by this old Drag Review clipping circa 1974.He continued, “Too many guys wanted to go out after the races and not work on their cars, and then when it came time to race they wanted to whine because we had an advantage. I was fresh out of high school and I was an ex-athlete and I was very determined and had a lot of willpower. I didn’t have the money, but luckily I had Keith Fowler. That car was hard on bearings and I had to pull the pan at the end of the night every night.”

Smith credited the influx of knowledge he received from Jack Roush as one of his key weapons in battle.

Smith added Roush thoroughly educated him when it came to prepping the motors. The hard work didn’t change the thought process of Smith’s detractors. Many that felt that IHRA needed to step in and regulate but didn’t.

“The IHRA had some staunch supporters and when Rickie started dominating so much, they called it quits,” added Fadely. “Why did that happen? When the sanctioning bodies allow one racer to win as much as they did, it literally prices everyone out of the class. I’d have to say that [team owner] Keith Fowler spent his money wisely.”

Over in the NHRA where the classification ran within Modified eliminator the competition created regional rivalries. There was an East and West Coast rivalry. Fadely added, “When they would come out from California, we would kick thier a****.”

Fadely continued, “They would run out there and their times would be two-tenths quicker and they would fall off of the pace once they came out here.”

The 1970s Super Modified cars were no performance slugs as they ran as quick as 10.18 seconds. Let the record reflect the first official NHRA Super Modified class eliminations [before there were A through C designations] winner was Ray Allen.

Fadely eventually got out of Super Modified racing in 1978 for another Car Craft project class, Econo Dragster, and sold his popular Maverick to an up and coming Modified racer named Mike Edwards. 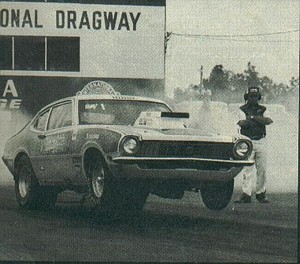 Pro Stock legend Rickie Smith took three-quarters of the event wins in the IHRA’s stand-alone version of Super Modified. The class was eventually cancelled, but Smith points out that he was more determined than anyone else and that was why he won so much.Edwards would complete Fadely’s mission and win the 1981 Modified Eliminator series title.

Drag racing photo journalist Dave Bishop was one of the journalists who helped chronicle the Super Modified movement. This style of racing kept his attention until the end.

“It was a neat class to watch and it was something that we all could relate to because we knew the people running it were working class guys,” Bishop said. “It was a good thing while it lasted, I just think it ran its course. It was a perfect class for that era.”

And for former Super Modified racer and Super Stock legend F. J. Smith, racing this class was one of the memories he’ll never forget.

“It’s amazing how we can’t remember what we did two weeks ago, but we can remember this stuff,” said F. J. Smith. “It was a very good class and brings back good memories.”