cover at the flick of a light switch. When a magazine, internet or otherwise, comes asking about drugs, a wall tighter than the Berlin Wall which separated East from West, Communism from Capitalism, can go up in the snap of a finger.

LUCAS: A HOOSIER AT HEART

The song "Back Home Again In Indiana" is associated with actor Jim Nabors and the Indianapolis 500. But as the National Hot Rod

The Corydon, Ind.-born and Southern California-reared Lucas called the
Hoosier State "God's country." And, like his adopted hometown
Indianapolis, he is maturing, even shining, as a big-league player.

Indianapolis, one of America's top dozen cities in population, has
taken the sports spotlight. Its National Football League Colts won the
2007 Super Bowl, and their home field -- Lucas Oil Stadium -- will host
the 2012 Super Bowl. The basketball-crazy city -- and the downtown
stadium for which his parents' company owns the 20-year, $122-million
naming rights -- also will host the NCAA Final Four tournament in April
2010. It's a heady time for the Motorsports Capital of the World.

He trained for months for his first bout, but his debut was postponed
after his sparring partner opened a cut near his eye. So he informed
his mother, "I have some good news and some bad news. The good news is
I'm not going to be a boxer. The bad news is I'm going drag racing."

With General Motors filing for bankruptcy in July and backing out of
its agreement with Pedregon and several prominent Po Stock teams, the
two-time NHRA Funny Car champion and current points leader is in a
fight for his financial life.

Again, Pedregon has a good-news/bad-news situation.

The bad-news part is obvious.

Terry Haddock is about as frustrated as he’s ever been in drag racing. 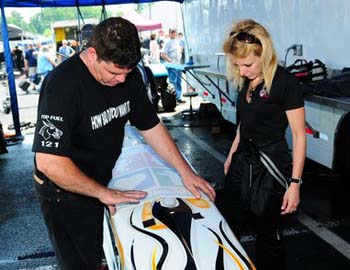 Haddock is discouraged because he’s one of many racers who interpreted
the NHRA’s testing limitations as assigned to the driver, car and team.
The independent racer, who admittedly competes by racing
from-race-to-race, is up in arms about a recent clarification of the
testing rules by the NHRA.

Haddock was penalized earlier in the year for a testing violation after participating in two IHRA events.

Haddock currently ranks twelfth in the NHRA Full Throttle Top Fuel
points standings, the same position held by Robert Hight in the Funny
Car standings, whose fifth test session of the season as a driver has
sparked a raging fire of debate. The NHRA agreed with John Force it was
within the rules for Hight to test in the No. 7 Castrol Ford normally
driven by Force.

When Dean and Cary Goforth first rolled out their Mountain Motor Pro
Stock cars for the first time back in February, both expected that

this
would be a banner year for the Goforth Family Racing Team.

With Dean in a brand new 2009 Pontiac GXP and Cary taking over the
reigns of their ’08 Chevrolet Cobalt, it was clear from the start that
the pair from Holdenville, Oklahoma was going to make a splash this
season and look good doing it.

What wasn’t expected, however, was the sudden enormity of their success.

Bryan Pierce is playing the waiting game and hanging in the balance is the future of the drag strip he manages.

The general manager for Virginia Motorsports Park, an NHRA-sanctioned
Full Throttle Drag Racing Series national event host facility located
in Dinwiddie, Va., is waiting to receive the final answer on whether or
not the NHRA plans to renew his contract for 2010 and beyond.

“We have an ongoing contract right now,” Pierce said. “And, we are waiting on it to be renewed.”

FIRMLY IN NASCAR, ROUSH KEEPS AN EYE ON THE DRAGS

Jack Roush, one of NASCAR's premier team owners and the Ford Motor Company's shining star in the auto industry's dark sky, has

achieved success by being a visionary.

Drag racing, it turns out, is his inspiration.

He's well beyond the romance of sniffing nitro fumes and being
tongue-tangled trying to describe header flames during Friday-night
qualifying. Roush thinks of dragsters and Funny Cars and his
imagination soars into the realms of medical technology and
extraterrestrial energy solutions.

"If the hospitals, with all of their medical science, could find a way
to put somebody in a tube and blow him out to a dragstrip whenever a
Top Fuel dragster or a Funny Car is getting ready to make a pass, it
would have a rejuvenating effect more than the electric shockers they
put on your chest when your heart stops," he said.

SCHUMACHER NO LONGER HOLDS BACK

For nearly a year, Tony Schumacher has been extremely careful to be
respectful and gracious about the changes to his U.S. Army

Dragster
team that might have devastated another race-car driver or exposed some
snarky side.

Since then, Tony Schumacher has chosen not to respond to those who
doubted his ability to win races in Johnson's absence. He never needed
to, really -- he has let his record speak for itself. This year he has
won three events, led the standings after four races, and never been
out of the top five.

They have a lot in common at the moment, Funny Car drivers Matt Hagan, Robert Hight, and Cruz Pedregon.

But it's not all positive.

Granted, Hagan is a National Hot Rod Association rookie. Just the same,
he joins Pedregon, the reigning champion and Hight, a two-time series
runner-up and 2005 rookie of the year, in a year-long struggle. Each
has shown flashes of strength, but none has been consistent. None has
coaxed the full potential from his car.

And all three are fighting to be one of the top 10 drivers who will vie for the championship in the Countdown's third edition.

John Force and his daughter, Ashley Force-Hood, held court inside the Force Racing motorcoach Friday afternoon prior to first round

qualifying at Infineon Raceway. A thirty minute media session turned into a 90-minute “monologue” by the master of story telling. To be fair, Ashley Force Hood got one or two words in edgewise, but if John felt the point needed an assist he was quick to step up to the podium. Ask Force a question and halfway into the answer he's telling you another story, which mean eventually he stares and you and says, “What was question?”

So, what can you learn about John Force and family in 90 minutes just by asking a few racing questions?  Plenty.